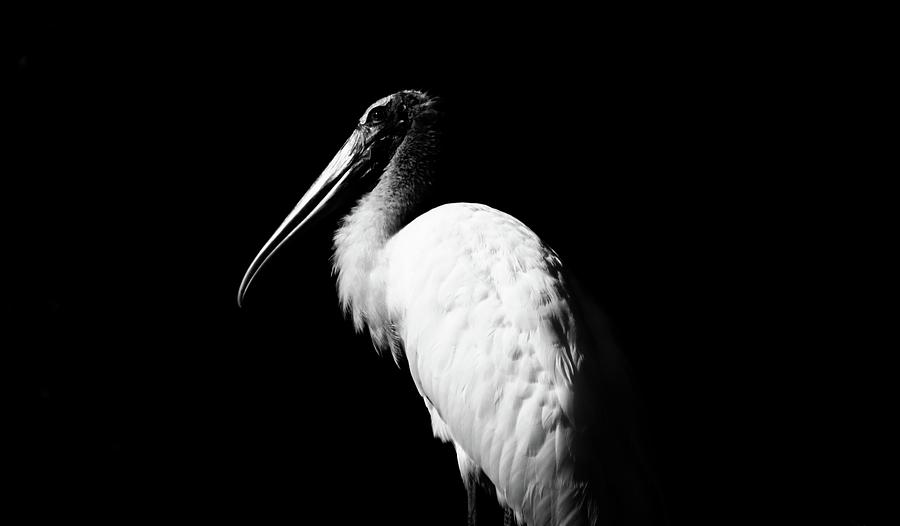 The wood stork (Mycteria americana) is a large American wading bird in the family Ciconiidae (storks). It was formerly called the "wood ibis", though it is not an ibis. It is found in subtropical and tropical habitats in the Americas, including the Caribbean. In South America, it is resident, but in North America, it may disperse as far as Florida. Originally described by Carl Linnaeus in 1758, this stork likely evolved in tropical regions. The head and neck are bare of feathers, and dark grey in colour.[2] The plumage is mostly white, with the exception of the tail and some of the wing feathers, which are black with a greenish-purplish sheen. The juvenile differs from the adult, with the former having a feathered head and a yellow bill, compared to the black adult bill. There is little sexual dimorphism.

The wood stork's habitat can vary, but it must have a tropical or subtropical climate with fluctuating water levels. The one-metre-diameter (3.3-foot) nest is found in trees, especially mangroves and those of the genus Taxodium, usually surrounded by water or over water. The wood stork nests colonially. The nest itself is made from sticks and greenery. During the breeding season, which is initiated when the water levels decline and can occur anytime between November and August, a single clutch of three to five eggs is laid. These are incubated for around 30 days, and the chicks hatch underdeveloped, or altricial, requiring support from their parents. They fledge 60 to 65 days after hatching, although only about 31% of nests fledge a chick in any given year, with most chicks dying during their first two weeks, despite being watched by an adult during that time. The chicks are fed fish of increasing size. The diet of the adult changes throughout the year. During the dry season, fish and insects are eaten, compared to the addition of frogs and crabs during the wet season. Because it forages by touch, it needs shallow water to effectively catch food. This is also the reason why the wood stork breeds when water levels start to fall.

Globally, the wood stork is considered to be of least concern by the International Union for Conservation of Nature. This is due to its large range. In the United States, on the other hand, it is considered to be threatened. Predators of the wood stork include raccoons (which predate on chicks), crested caracaras, which prey on eggs, and other birds of prey, which feed on eggs and chicks. Hunting and egg-collecting by humans has been implicated as a factor in the decline of South American wood storks. Humans also cause nest failures through ecotourism, although observation through binoculars about 75 metres (246 ft) away does not have a large effect on nesting success. Habitat alteration has caused the wood stork to decline, with levee and drainage systems in the Everglades causing a shift in the timing of breeding and thus a decrease in breeding success.
Contents

Thank you very much Bob for the feature in the New Faa Uploads group.....it is greatly appreciated

Really nice in black and white!

Thanks Sharon....I thought so too!!

Thank you very much Morris....

Beautiful light and shadow on this wood stork! l/f

Thank you very much Jessica for the feature in the Life is not so Black and White or Is It group.....it is greatly appreciated Christopher James

Beautiful in black and white as well Chris! L/F

Congratulations! Your fantastic art has been featured on the Home Page of the ABC GROUP from the G IS FOR GREYSCALE , themed week, February 15, 2021- FEBRUARY 22. 2021! You are invited to add your wonderful art in the Features Archive Discussion in the ABC GROUP.

Thank you very much Pamela for the feature.....it is greatly appreciated

The black and white is perfect for this picture! l/f/t

Thank you very much Kay....

Beautiful in black and white!

The black and white on this shot is absolutely brilliant!

Thank you very much Monte...

What a beautiful picture! This is so great

wow this is amazingly beautiful work.

Thanks you for all the comments....

Beautifully captured in black and white!