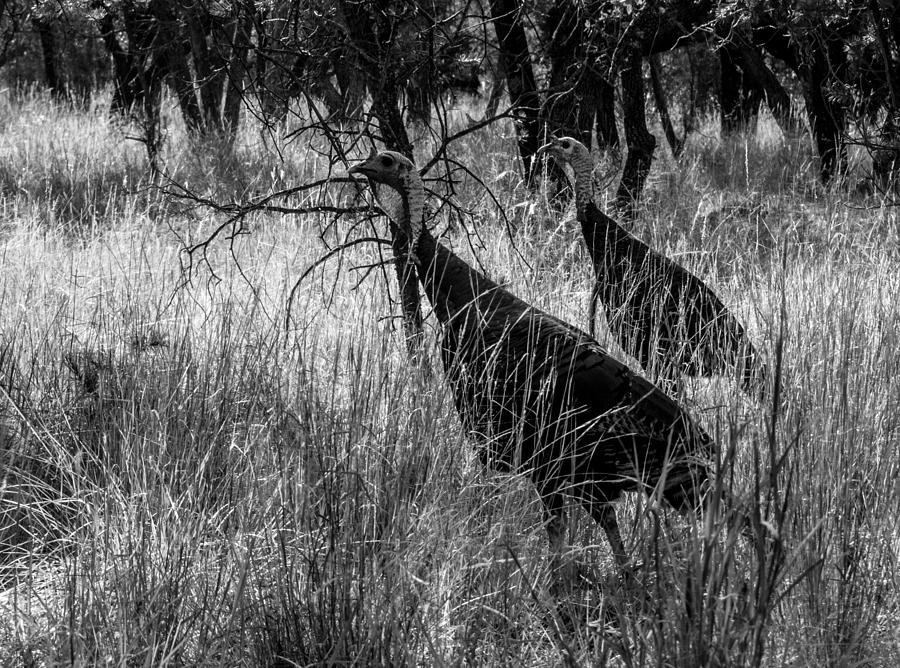 Two young tom turkeys make their way across a grassy opening in the woods. Photo taken August 14, 2015 in the Davis Mountains of west Texas. Flora and fauna is abundant in this region of the Chihuahuan desert.

The following is from:
http://txtbba.tamu.edu/species-accounts/wild-turkey/
"Wild Turkeys are widespread in Texas, generally occurring where there is sufficient moisture to support grass and trees. The only extensive areas where they do not occur are in the very arid areas of the Trans-Pecos and the extensive prairies and agriculture areas of the high plains in the Texas Panhandle. There are 5 recognized subspecies of Wild Turkey, each associated with different habitat. Three subspecies occur in Texas. The Merriam’s turkey (M. g. Merriami) with white tail feather tips inhabit ponderosa pine habitat in the mountainous regions of the Trans-Pecos. The eastern turkey (M.g. silvestris), with dark color tail tips inhabits humid eastern Texas, and the Rio Grande turkey (M. g. intermedia), with buff colored tail tips is found throughout central Texas from Oklahoma to Mexico. Historically, eastern turkeys inhabited the Pineywoods and bottomland hardwoods of the southern coastal plain and oak-hickory forests; generally where annual rainfall was above 88 cm (35 in). Rio Grande turkeys are associated with the more arid brush lands westerly."