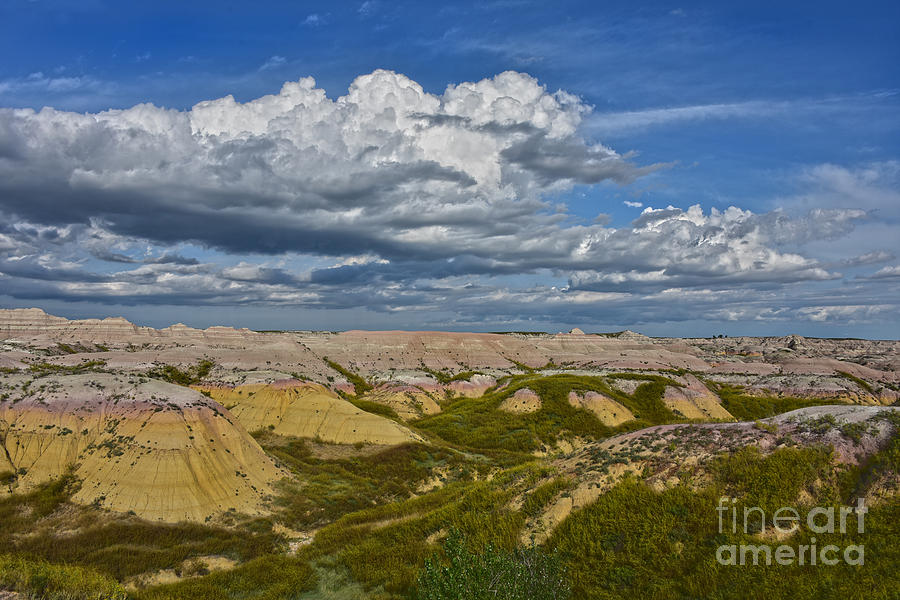 Cumulus clouds sweep across the sky over the Badlands National Park, with the Yellow Mounds formations in the foreground.

Yellow Mounds area were formed when the sea drained away with the uplift of the Black Hills and Rocky Mountains, exposing the black ocean mud to air. Upper layers were weathered into a yellow soil, called Yellow Mounds. The mounds are an example of a fossil soil, or paleosol. A variety of plants now grow on the mounds.

The Badlands were deposited in layers. The layers are composed of tiny grains of sediments such as sand, silt, and clay that have been cemented together into sedimentary rocks. The sedimentary rock layers of Badlands National Park were deposited during the late Cretaceous Period (67 to 75 million years ago) throughout the Late Eocene (34 to 37 million years ago) and Oligocene Epochs (26 to 34 million years ago), according to the National Park Service. Different environments—sea, tropical land, and open woodland with meandering rivers—caused different sediments to accumulate here at different times. The layers similar in character are grouped into units called formations. The oldest formations are at the bottom and the youngest are at the top, illustrating the principle of superposition.

The park protects 242,756 acres (379.3 sq mi; 982.4 km2) of sharply eroded buttes and pinnacles, along with the largest undisturbed mixed grass prairie in the United States.

Thank you very much, James!