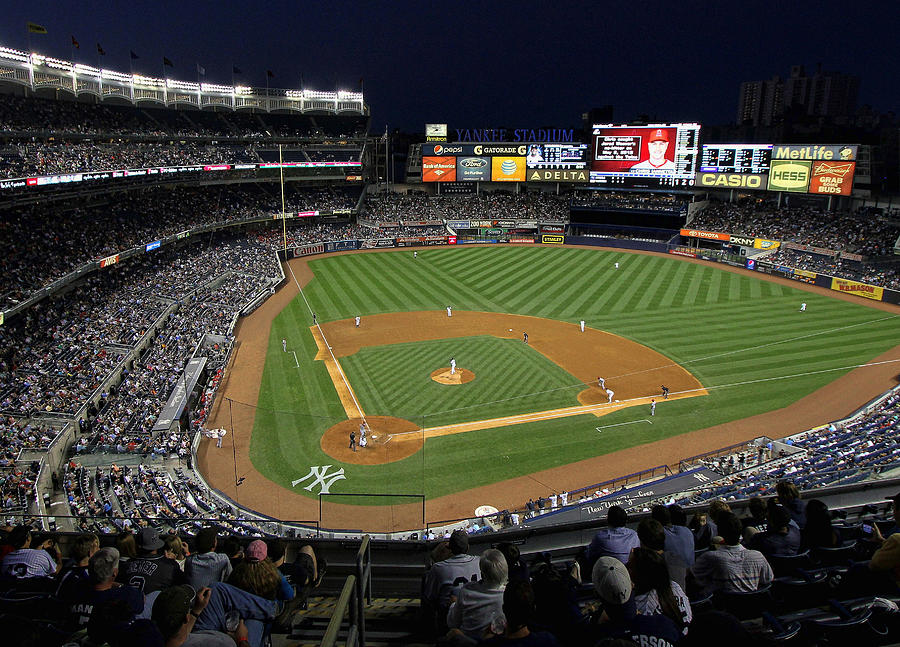 Yankee Stadium is a stadium located in The Bronx in New York City. It is the home ballpark for the New York Yankees, one of the city's Major League Baseball (MLB) franchises. It opened at the beginning of the 2009 MLB season as a replacement for the team's previous home, the original Yankee Stadium, which opened in 1923 and closed in 2008. The new ballpark was constructed across the street, north-northeast of the 1923 Yankee Stadium, on the former site of Macombs Dam Park. The ballpark opened April 2, 2009, when the Yankees hosted a workout day in front of fans from the Bronx community. The first game at the new Yankee Stadium was a pre-season exhibition game against the Chicago Cubs played on April 3, 2009, which the Yankees won 7 to 4. The first regular season game was played on April 16, a 10 to 2 Yankee loss to the Cleveland Indians.
Much of the stadium incorporates design elements from the previous Yankee Stadium, paying homage to the Yankees' history. Although stadium construction began in August 2006, the project of building a new stadium for the Yankees is one that spanned many years and faced many controversies. The stadium was built on what had been 24 acres of public parkland. Replacement baseball fields opened in April 2012. Also controversial was the price tag of $1.5 billion, which makes it not only the most expensive baseball stadium ever built, but the second-most expensive stadium of any kind (after MetLife Stadium in East Rutherford, New Jersey
This is a view of the "Newest" Yankee Stadium taken from the upper deck during a night game. The view takes in the wonderful feel of Ameica's pasttime at the old ballpark. The green grass, the batter, the pitcher and all is well with the world. At least for a few hours.

What a stadium, wow great image!

Thanks a lot Andy

Not surprised this sold. Good job

Thanks a lot Michael

Great capture Allen.....the only stadium left on my to do list in AL East......It is off to Toronto for the series with the Orioles at the beginning of September, go O's L/F

Thank you Chistopher. That's a great bucket list and a fun thing to do.

Karen, thank you for the feature of Yankee Stadium in the Sold on FAA group

Thank you Jeffrey, appreciate the vote.

Congratulations on your sale!!!!!

You congratulated me once already but I'll accept congrats again. Thank you.

Thank you to the buyer from Staten Island, N.Y. Enjoy !!

Congratulations on your art sale!

Congrats on your art sale :d!!

Thanks a lot Brian

Congratulations on your $ale!!!

Steve, thank you for the feature of Yankee Stadium in the Urban Images group

Joanna, thank you for the Feature of Yankee Stadium in the Iconic New York City group. Much appreciated.