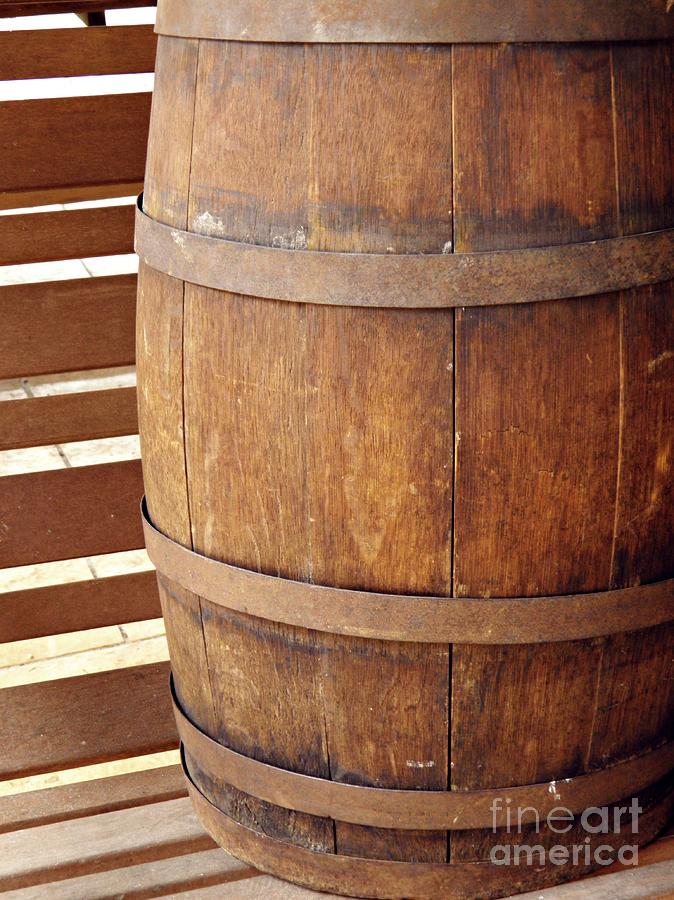 Per Wikipedia: A barrel, cask, or tun is a hollow cylindrical container, traditionally made of wooden staves bound by wooden or metal hoops. Traditionally, the barrel was a standard size of measure referring to a set capacity or weight of a given commodity. For example, in the UK a barrel of beer refers to a quantity of 36 imperial gallons (160 L; 43 US gal). Wine was shipped in barrels of 119 litres (31 US gal; 26 imp gal).

Someone who makes barrels is called a "barrel maker" or cooper. Barrels are only one type of cooperage. Other types include, but are not limited to: buckets, tubs, butter churns, hogsheads, firkins, kegs, kilderkins, tierces, rundlets, puncheons, pipes, tuns, butts, pins, and breakers.

Barrels have a variety of uses, including storage of liquids such as water and oil, fermenting wine, arrack, and sake, and maturing beverages such as wine, cognac, armagnac, sherry, port, whiskey, and beer. The term can also refer to roughly cylindrical containers made of modern materials like plastic.

Barrels have a convex shape and bulge at their center, called bilge. This facilitates rolling a well-built wooden barrel on its side and change directions with little friction, compared to a cylinder. It also helps to distribute stress evenly in the material by making the container more curved. Barrels have reinforced edges to enable safe displacement by rolling them at an angle (in addition to rolling on their sides as described).

The wooden parts that make up a barrel are called staves, while the rings that hold them together are called hoops. The latter are generally made of galvanized iron, though historically they were made of flexible bits of wood called withies. While wooden hoops could require barrels to be "fully hooped", with hoops stacked tightly together along the entire top and bottom third of a barrel, iron-hooped barrels only require a few hoops on each end.

Wine barrels typically come in two hoop configurations. An American barrel features 6 hoops, from top to center: head- or chime hoop, quarter hoop and bilge hoop (times two), while a French barrel features 8, including a so-called French hoop, located between the quarter- and bilge hoops. The opening at the center of a barrel is called bung hole and the stopper used to seal it bung. The latter is generally made of white silicone.

Wonderful textures and lines in this fine composition.