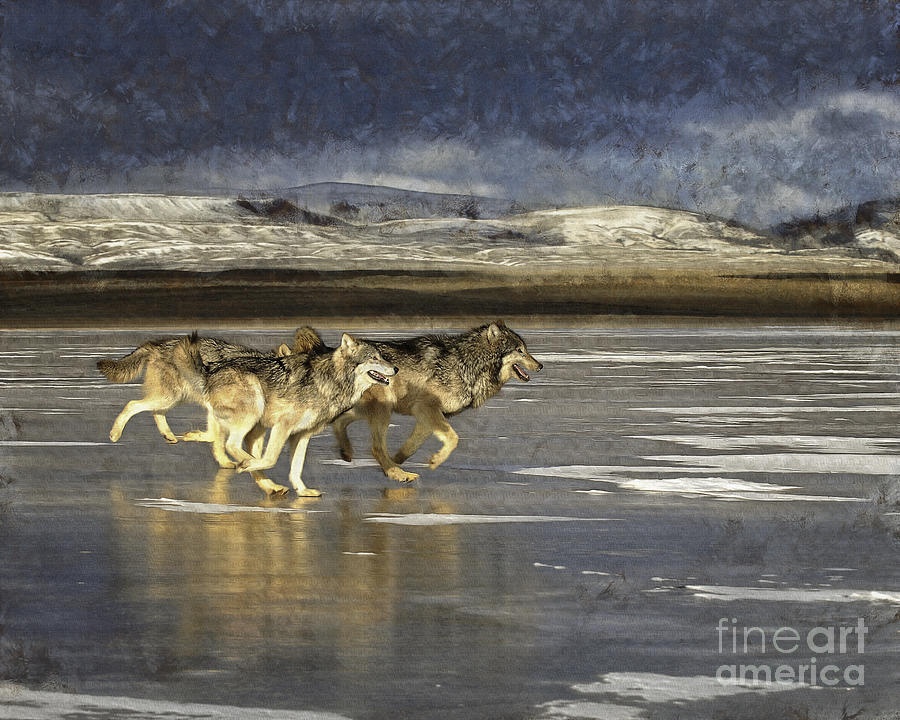 Three wolves running across a frozen solid lake bed of ice.Wolves occupy a wide range of habitats including arctic tundra,
open woodlands, forests, grasslands and arid landscapes.
A very strict Hierarchy in a pack. A top-down hierarchy governs wolf packs, with the alpha male and alpha female on top.
The alpha male holds dominance over every member of the pack. The alpha female is his sole mate, dominant over all other
pack members except the alpha male. This dominant pair is the only couple in the pack that breeds, although all members
of the pack care for, protect and feed the pups. They mate for life, and if one of them dies another member of the pack will
rise to take over the alpha position. If the alpha male in particular is injured or ill, the beta male may take over. When this happens,
the deposed alpha male typically leaves the pack, taking on a lone nomad existence.To avoid fighting within the pack wolves have
ritualized behaviors, postures, and gestures that are used to show dominance. A dominant wolf will assert himself by standing erect,
ears and tail up, eyes open, teeth bared, and body hairs erect. The subordinate wolf will show his submission by slumping down,
laying back his ears, putting his tail between his legs, closing his mouth, and slightly closing his eyes.
This is generated digitally from my original photographs. All images are copyrighted Wildlife Fine Art. All Rights Reserved. Copying and/or distributing these images without our permission is strictly prohibited. Any unauthorized usage will be prosecuted to the full extent of U.S. Copyright Law.

Exceptional wildlife capture. Congratulations for all the features! L/F/P :)

Thank you John M Bailey for featuring my wolf pack image called Wolves - Frozen Tundra in the group Images That Excite You !

Excellent description and rendition of this action shot!

Thanks for the FAV Mark !

Thanks for the FAV Jane !

Thanks for the FAV Lois !

Congratulations on your artwork being featured in one of FAA's Newer Groups - Camera Art! Be sure you archive your work in the Features Archive thread! group or any other thread that it would fit in! LF

Thank you Jannice Walker for featuring my image called Wolves - Frozen Tundra in the group All Art Welcome !

OMG, I love wolves, they're so beautiful! Great capture! L/F

Congratulations! Your beautiful artwork has been featured in the group "Office Art Decor".

Charlie,Thank you very much for feature my image called Wolves - Frozen Tundra . I appreciate that very much !

Thank you very much Charlie Cliques for featuring my image called Wolves-Frozen Tundra in the group Office Art Decor !

I LOVE, LOVE, LOVE wolves and this shot really speaks to me. AMAZING capture!!!

Lisa Thank you very much !

Thank you very much Annie !