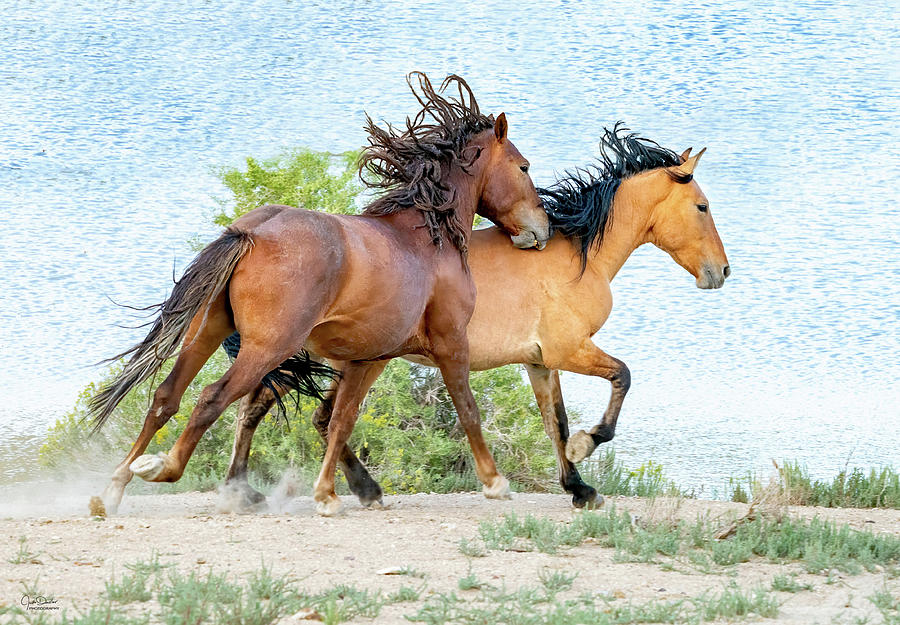 Two young wild horses in a little dispute (the darker one is trying to bite the lighter one), but they are actually friends and will make up a few minutes later and will walk off together. I love the wild manes flying as they run next to the water! Human friends have disputes, so why not horses?

Ten days after this photo was taken, the BLM rounded up most of the wild horses at Sand Wash Basin. They used helicopters, which completely terrifies the horses and forces them to run long distances to holding pens. Families and bands get separated, and some horses get injured and have to be put down. I hope so much that these two survived and managed to remain in the wild together.

Wild Mustangs are free-roaming horses of the American west that were originally brought to the Americas by the Spanish. We think of Mustangs as wild horses, but because they are descended from once-domesticated horses, they are actually feral horses. This free-roaming horse population is managed and protected by the BLM, the Bureau of Land Management. There is some controversy surrounding the sharing of land and resources by the free-ranging mustangs with the livestock of the ranching industry. There is also dispute about the methods with which the federal government manages the wild horse numbers.

Beautiful capture of these two wild ones! Hopefully they still run free!!! l/f/t/p/fb

great picture of the Mustangs