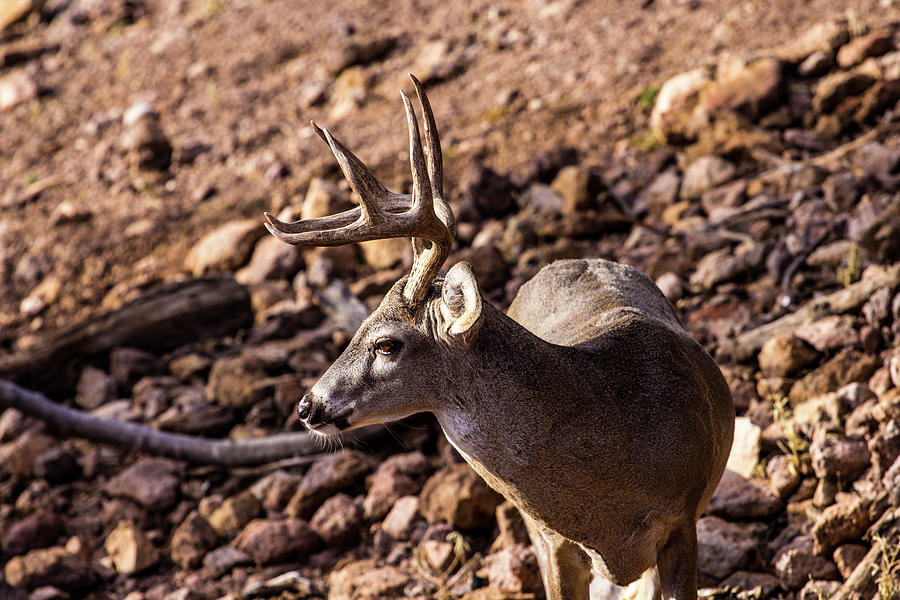 A west Texas whitetail deer buck looking down the mountainside to see if any other deer are around.

In the Davis Mountains of west Texas. Near historic and scenic Fort Davis, Texas, Marfa, TX, and the McDonald Observatory of the University of Texas.

The following is from: http://wildlife.tamu.edu/wildlifemanagement/deer/

For many people deer hunting is the highlight of the fall and winter seasons. Texas is home to an estimated 3.6 million white-tailed deer (Odocoileus virginianus), providing ample hunting and wildlife viewing opportunities for residents and non-residents alike. In 2013 roughly 700,000 hunters had a success rate of 58.39%. Mule deer (Odocoileus hemionus) populations are considerably lower, usually fluctuating from 150,000 to 250,000 depending on habitat conditions. They are confined to the western portion of the state, mostly in the Trans- Pecos but with some in the Panhandle and western Edwards Plateau. In 2013 roughly 22,000 mule deer hunters had a 35.88% success rate.

White-tailed deer and mule deer look very similar, but a few key characteristics will help you distinguish between the two. The average body size of mule deer is usually larger than white-tailed deer; however this is not a great identification tool because you rarely have both species standing next to each other for comparison. White-tailed deer can be recognized by their white bottomed tail used as a warning flag; mule deer tails are a more cream colored with a distinct black tip. The easiest way to identify mule deer, especially antlerless deer, is by the characteristically large ears in proportion to head size, which is where they get their name. White-tailed deer have smaller, seemingly more proportional ears. Mule deer also have characteristic black markings on their forehead and around their ears, as can be seen in the pictures above. On bucks during the breeding season the antlers are also an additional indicator. On mule deer the antlers are usually bifurcated (the tines come in forked pairs). Mule deer racks are generally described in a side x side format, for example 4X4 for a deer with 4 tines on each side. White-tailed deer usually have all their tines coming off one main beam, and antlers are described based on total points, such as 8pt or 9pt. Antlers alone are not a great indicator of species due to variation in individuals. For instance, a 3X3 mule deer rack with a non-bifurcated tine on each side can look very similar to a 6 point white-tailed deer rack. There are also white-tailed deer racks with forked tines that can look very similar to a mule deer rack. There are areas were people have reported mule deer with non-bifurcated racks similar to white-tailed deer or white-tailed deer herds with many bifurcated racks. If in doubt contact a TPWD biologist for identification help.
Breeding season varies slightly depending on where in Texas a deer herd is located. Mule deer breeding season starts in mid-November, peaks in mid/late December, and ends mid-February. Peak breeding for white-tailed deer is usually in mid-November through early December. Fawning for both species takes place in the summer, usually June/ July, depending on when the doe was bred. White-tailed deer usually have one fawn their first fawning season and then twins during later years; Mule deer usually have one fawn their second fawning season and twins thereafter."