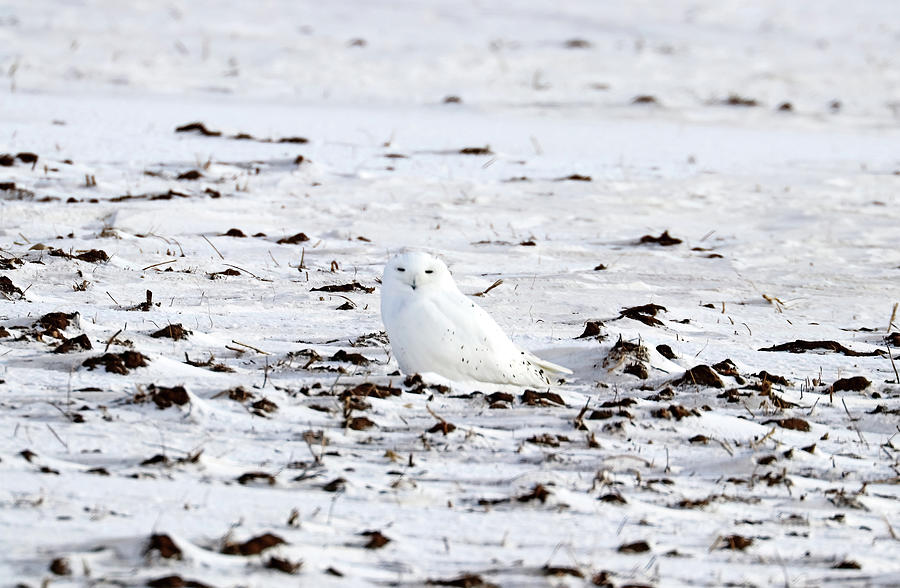 "Whiter Than Snow" by Debbie Oppermann. One of Canada’s most recognizable owls due to its snowy-white plumage, the aptly named snowy owl is an enduring symbol of Canada’s North. Surprisingly, unlike most other owls, the snowy owl is diurnal (active during the day) rather than nocturnal. This bird of prey is a great judge of distance, which allows it to swoop down and catch its prey. The circle of feathers surrounding its eyes helps reflect sound to its ears; a feature that comes in handy when vision is limited.Adult male owls are usually pure white in colour, while females are darker with feathers barred with dark brow. At nearly half a metre tall, with a wingspan of almost 1.5 metres, the snowy owl is one of the larger North American owls.Arctic hares, ptarmigan, foxes and seabirds all make up this predator’s diet. However, lemmings are their preferred prey. Snowy owls swallow their smaller prey whole and must capture the equivalent of seven to 12 mice a day to meet their food requirements.They are a sit and wait hunter, silent and patient they survey the winter fields as they hunt during the day.Snowy owls can live in the Arctic regions of North America and Eurasia year-round. Some, however, only stay during breeding and nesting season. When winter comes, they migrate to southern Canada and even the United States. Some snowy owls also cross the Atlantic Ocean, migrating between Russia and Canada.There haven't been too many sightings of the Snowy this winter so far, so actually spotting this Arctic handsome white male between Fergus and Arthur Ontario Canada was thrilling!

Congratulations on your Feature in Canadian Artists for Fine Art America!

Congratulations, your wonderful image has been featured on the homepage of the La Nature Group. Please feel free to add it to the Featured Images #1 2022 discussion thread for permanent display.

He's a beauty! Great find and a beautiful image!