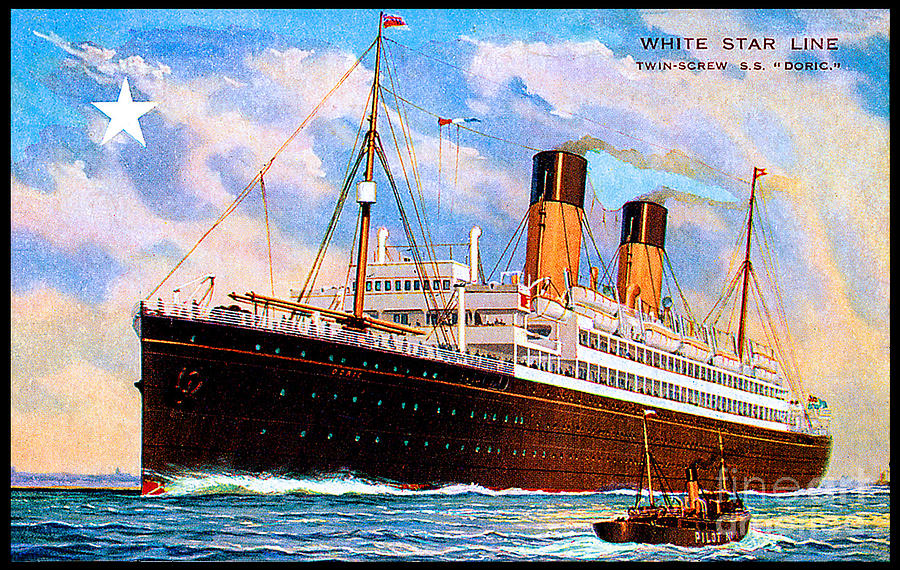 White Star Line Twin Screw SS Doric Travel Postcard, SS Doric was a British ocean liner operated by White Star Line. Doric was White Star's second and last turbine-propelled ship. The vessel was constructed by Harland and Wolff in Belfast and was launched in 1922. Her passenger capacity was 600 in cabin class plus 1,700 3rd. class, with a crew of 350. The ship's maiden voyage on 8 June 1923, was from Liverpool, England to Montreal, Quebec, Canada. The Oceanic Steam Navigation Company, more commonly known as the White Star Line (WSL), was a British shipping company. Founded out of the remains of a defunct packet company, it gradually rose up as one of the most prominent shipping lines in the world, providing passenger and cargo services between the British Empire and the United States. While many other shipping lines focused primarily on speed, White Star branded their services by focusing more on providing steady and comfortable passages, for both upper class travellers and immigrants. Today, it is remembered for the innovative vessel Oceanic of 1870, and for the losses of some of their best passenger liners, including the wrecking of RMS Atlantic at Halifax in 1873, the sinking of RMS Republic off Nantucket in 1909, the loss of RMS Titanic in 1912 and HMHS Britannic in 1916 while serving as a hospital ship. Despite its casualties, the company retained a prominent hold on shipping markets around the globe before falling into decline during the Great Depression, which ultimately led to a merger with its chief rival, Cunard Line, which operated as Cunard-White Star Line until 1950, when Cunard purchased White Star's remaining share. Cunard Line then operated as a separate entity until 2005 and is now part of Carnival Corporation & plc. As a lasting reminder of the White Star Line, modern Cunard ships use the term White Star Service to describe the level of customer care expected of the company.