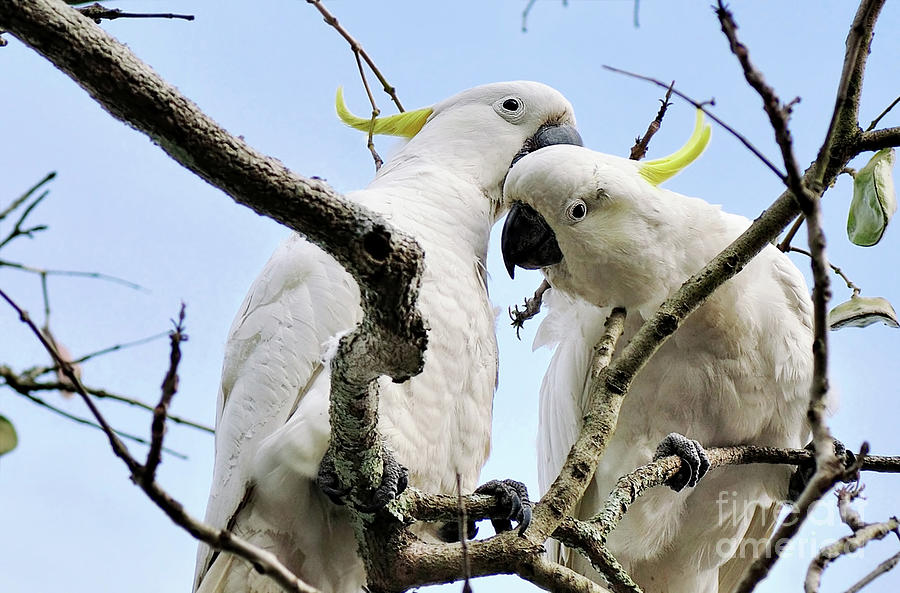 [From Wikipedia]
A cockatoo is a parrot that is any of the 21 species belonging to the bird family Cacatuidae, the only family in the superfamily Cacatuoidea. Along with the Psittacoidea (true parrots) and the Strigopoidea (large New Zealand parrots), they make up the order Psittaciformes (parrots). The family has a mainly Australasian distribution, ranging from the Philippines and the eastern Indonesian islands of Wallacea to New Guinea, the Solomon Islands and Australia.

Cockatoos are recognisable by the showy crests and curved bills. Their plumage is generally less colourful than that of other parrots, being mainly white, grey or black and often with coloured features in the crest, cheeks or tail. On average they are larger than other parrots; however, the cockatiel, the smallest cockatoo species, is a small bird. The phylogenetic position of the cockatiel remains unresolved, other than that it is one of the earliest offshoots of the cockatoo lineage. The remaining species are in two main clades. The five large black coloured cockatoos of the genus Calyptorhynchus form one branch. The second and larger branch is formed by the genus Cacatua, comprising 11 species of white-plumaged cockatoos and four monotypic genera that branched off earlier; namely the pink and white Major Mitchell's cockatoo, the pink and grey galah, the mainly grey gang-gang cockatoo and the large black-plumaged palm cockatoo.

Cockatoos prefer to eat seeds, tubers, corms, fruit, flowers and insects. They often feed in large flocks, particularly when ground-feeding. Cockatoos are monogamous and nest in tree hollows. Some cockatoo species have been adversely affected by habitat loss, particularly from a shortage of suitable nesting hollows after large mature trees are cleared; conversely, some species have adapted well to human changes and are considered agricultural pests.

Thanks Kay for your comment and vote. Much appreciated. Sent a few L/F's your way :)

Many thanks Michaela, loved browsing your images and left several L/F's in appreciation.

Faved. Congrats on your placing

Thanks Larry for your comment and feature in the Go Take a Hike Photography Group. Loved browsing some of your new images and left a few L/F's in appreciation.

Congratulations, Kaye – your white thing in nature scene has been featured by the Go Take a Hike Photography Group! Feel free to add it to the Featured Images thread in the group discussion board for archive.

Thanks very much William for featuring my image in "Wild Birds of the World". Much appreciated :)

Your beautiful and identified bird image has been featured by Wild Birds Of The World, a nature photography group. L/F

Thanks very much Sarah for your comment and congratulations :)

Adorable capture, Kaye! Congrats on your 2nd place tie in the Kindness And Tenderness contest! L/F

Thank you so much Chris, and for the F/V. It is rare to catch both together like this.... they are normally eating!

This is so sweet, Kaye. Great capture.

Thanks again Kristin. It is so nice to see birds grooming each other.