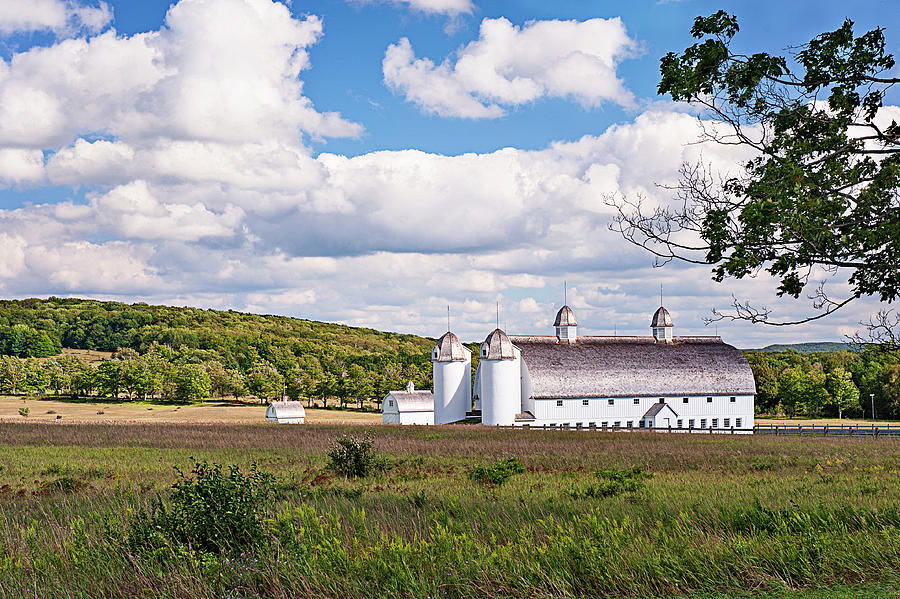 The D. H. Day farm in Glen Arbor, Michigan, was built by the lumber baron in the late 1800s. It consists of 400 acres of rolling hills filled with trees and fields that are as green as any in Ireland and turn a brilliant pallette of warm hues in autumn. The farm originally consisted of 5,000 acres of forested land in the northern Michigan area close to the Sleeping Bear Sand Dunes and Lake Michigan.

In the 1920s, Day had 5,000 cherry and apple trees and the farm was 400 acres, which he called Oswegatchi, after the New York community where his father was from and D. H. was born.

The white barn, with its unique French curves and metal roof is a well-known landmark and has been owned by Don Lewis since 1973. It is part of the Sleeping Bear Dunes National Lakeshore now, although still privately owned by Mr. Lewis, who has spent hundreds of thousands of dollars on updates to keep the farm in beautiful condition.. It is one of the '50 most significant structures in Michigan' according to the Society of Architectural Historians.

The white barn with its poured concrete silos (that were added much later) is very unusual, in that the tall, white silos not only have dormers, but the towers are topped with octagonal cupolas with bell shaped roofs. The roofs are metal so they shine brilliantly in the sun and are vaulted, ogee roofs with slightly flared caves to permit water drainage.

The entire landmark and the surrounding fields are breathtakingly beautiful. The fields blow in the wind and make for a gorgeous, picturesque view of what the best of farm life in Michigan looks like today even after well over 100 years. Thank you, D. H. Day and Don Lewis!

Beautiful old mill, looks so nice under those fluffy white clouds and blue sky -- what a perfect day!

That it was! Thank you.