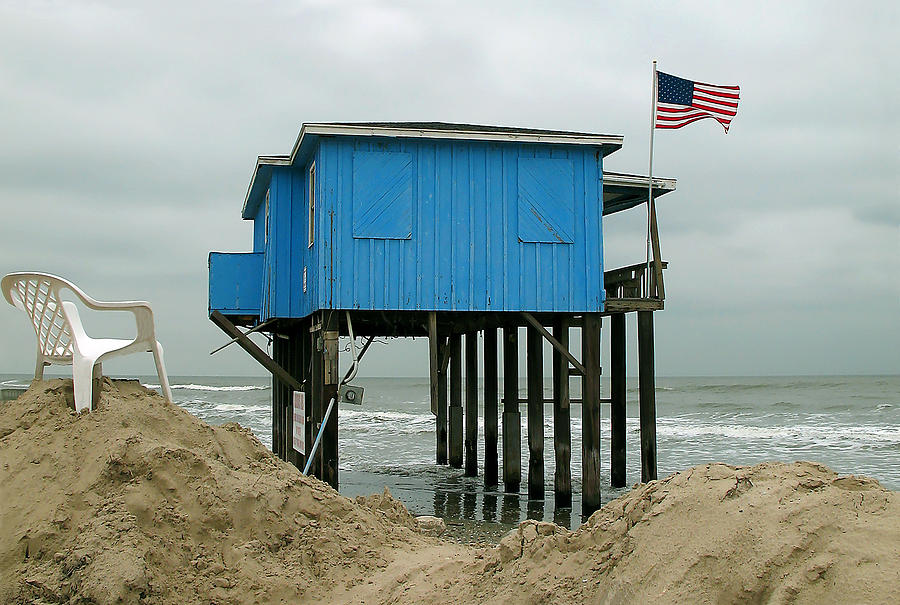 After Hurricane Ike hit Galveston, Texas, this simple beach house stood bravely alone on stilts in the wake of the storm. The American flag proudly flew in the breeze, and a chair marked the spot where one could sit and enjoy what was left of the view.

The front row of homes had all been destroyed, except this one and perhaps a handful of others. The second row of homes, on the street behind this, was nearly obliterated as well. The beach had been so eroded, the house literally stood in the waters of the Gulf of Mexico.

Whoever placed the chair atop the sand dunes apparently had not lost his sense of humor, despite the destruction all around. The American flag proudly waves against the gray sky in the background. A somber, powerful conversation piece that speaks to virtues such as survival, courage, patriotism, and a positive attitude in adversity. Story-telling at its best.

FEATURED on the homepages of these FAA groups: Seen But Not Noticed and Images That Excite You, ABC Group O is For One (Luther Fine Art), and The American Flag (Thomas Woolworth). Featured 2021 in Showcasing the South, No Place Like Home, 500 Views, April 2021, Compact Digital Camera Photographers, and Just Perfect, June 2021. My thanks!

A TOP FINISHER in the Peaceful Expressions Contest, July 2019. My thanks!

Janis, "Weathering the Storm" is a personal favorite. Thank you for featuring it in Just Perfect!

Kathy Isserman, thank you for featuring "Weathering the Storm" in Showcasing the South!

It is my pleasure to inform you that your AWESOME photo is FEATURED on the HOMEPAGE OF "SHOWCASING THE SOUTH GROUP"! L Please add the photo to the 2021 “FEATURED IMAGE ARCHIVE THREAD.” Thank you for participating in the group.

Thanks for making it a Favorite, Matt. Glad you love it. That makes me happy, for I remember standing there thinking how beautiful it truly was in all its strength and glory. I agree about the color. It couldn't be better.

I love this! What a beautiful splash of color!

Thomas Woolworth, thank you for honoring this image with a homepage feature in your group The American Flag. So appreciated!

Congratulations,! Your impressive artwork has been Featured by the - ABC Group O is For One - Be Sure to archive it in the Feature thread LF

Alana, thanks so much for appreciating this image and taking the time to comment. Thanks, too, for liking and sharing it!

Thank you, Terry Cobb, for the homepage feature in Seen But Not Noticed!

Thank you, John, for the feature!