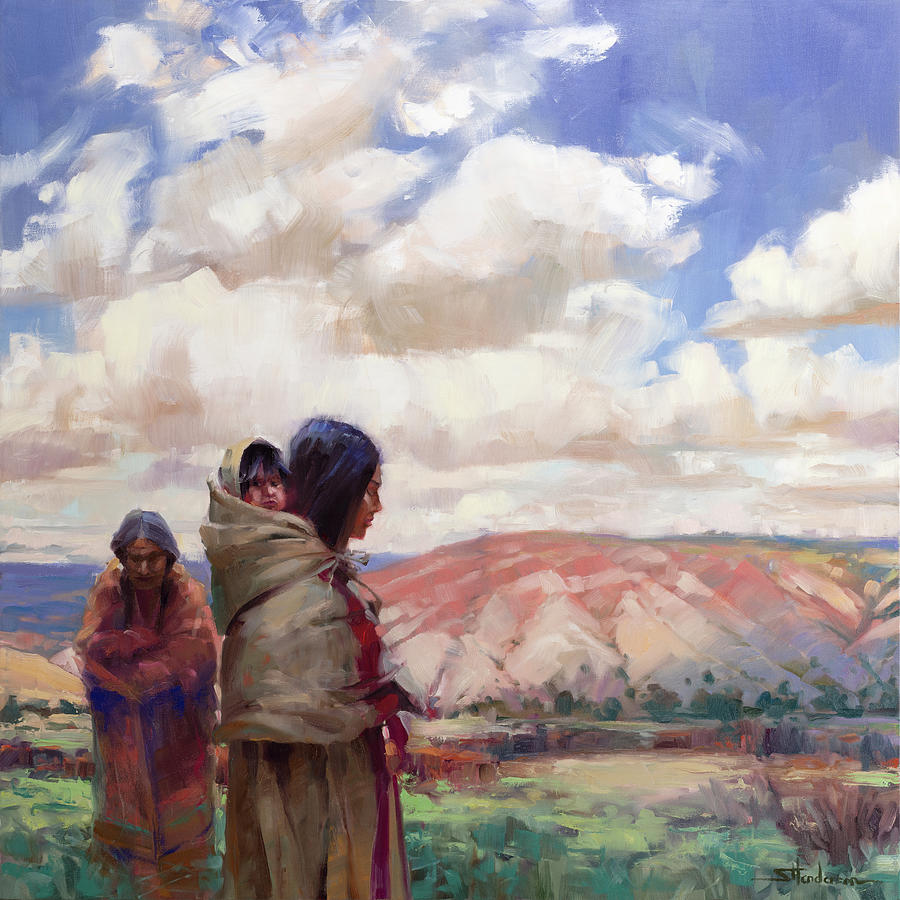 Who are The People?

Throughout history and the world, groups of human beings have called themselves The People. They share a culture, a language, a land in which they live, a belief in who and what they are. Many times they have family connections. They are a tribe.

In North America, prior to their being decimated by government and its armies, many indigenous groups – some peaceful, some not – called themselves The People. They saw themselves as unique, special, treasured by a Creator who had made them and saw them as his children. They themselves treasured the land upon which they lived, seeing it as a gift from the Creator, from Nature, from Mother Earth – from some benevolent force who takes an interest in ordinary, everyday, genuine, real people.

The artwork, We the People, shows a grandmother, her daughter, and her daughter’s child. Standing as a trio, looking out onto land that they once considered theirs upon which to live, they see a different past, present, and future.

The grandmother grew up in another world, one in which the imperialist and business forces of a select group of aggressive and powerful people had not yet planted their foot. She grew up with traditions and customs that her grandmother before her would have known.

Her daughter lives in a time of transition. The aggressive and powerful people have planted their feet. They attack; they push; they force. They make promises that they fully expect to break, and they do break them. The world of this young woman is one of chaos and unwelcome change, of uncertainty, of hopes raised and then dashed. Will the aggressive and powerful people allow her and her family to live as they once did? Will things go back to normal? She doesn’t know, because nothing of this magnitude has ever happened to her, or her People, before.

And then there is the child, too young to know about any of this, secure upon the mother’s back. For this child, there will be “The Indian Wars,” the breakup of The People, the forced internment in reservations, the government schools where the new ways, the new normal, will be taught, driving out the wisdom and teaching of centuries. For the trio standing here, this is the future.

But for us, today, it is history. And throughout the history of “civilization,” the powerful push forth.

For those who are peaceful, who are ordinary, everyday, genuine, and real, it is wise to remember those who are not. We have more than enough history to teach us, if we are willing to learn.

Fine Art by Alexandra  29 Days Ago

A wonderful story that fits perfectly with the mood of the colors! Wonderful!!

Thank you, John, for your generous words. I appreciate that you took time to read the description as well. By the way, the beautiful accompanying essays are created by my wife and business partner, Carolyn. She writes, I paint -- a marriage made in heaven.

Sad, poignant painting and description. I easily see this as belonging in the Smithsonian Museum in their displays of Native Americans.

Thank you, Jim, for your thought-filled words. And, yes, some things worth painting are sad -- but if it encourages us to be better people then it serves a worthy purpose. I trust that this artwork will help accomplish that.

The face of the grandmother. The weariness, the perseverance ... so well done!

Thank you, Joe, for your observations that go deeper than just the skin.

Congratulations your outstanding artwork has been “featured” on the leading page of Impressionism group! Please take a moment to add it to the New Featured Art Archive #15 and the Catalogs in the group’s discussions. Excellent work! Lori

i got to say I love your work Steve! Amazing piece of art! L/F

I appreciate that, Marvin. Thank you.

A beautiful and emotional piece, Steve. You captured the thoughts of so many. LF

I am made happy and gratified after reading your words, Marilyn. Thank you.

BRAVO! Your artwork has earned a FEATURE on the homepage of The Artists Group, 1/27/2021! You may also post it in the Group's Features discussion thread and any other thread that fits!

Congratulations Steve on your feature in the group OBSESSED Painters Paintings

Congratulations on your feature in the Soul of an Artist

Congratulations, on SOCIAL COMMENTARY OF THE WEEK, in Our World Gallery, group!

CONGRATULATIONS, Steve, this stunning painting is also my Social Commentary of the Week in the fine art group, Our World Gallery! v/f/feature, pin, tw, fb promotion!

Very well done! I also love it when artists write a description of their thoughts about the painting and describe the scene/characters/ thought process around the painting. Well done on all counts.

CONGRATULATIONS, Steve! This is my Art of the Week in the fine art group, Old MASTERS--Painters and Traditional Arts! As always, beautiful emotive work of art. v/f/feature, pin, tw, fb promotion!

We The People is so powerful and so telling of what people can do to other cultures and the earth itself. I absolutely loved the description and how beautifully it was written. Brought me to tears as your painting did. Thank you so much Steve!

Great title to this very nice painting with all the different face expressions!