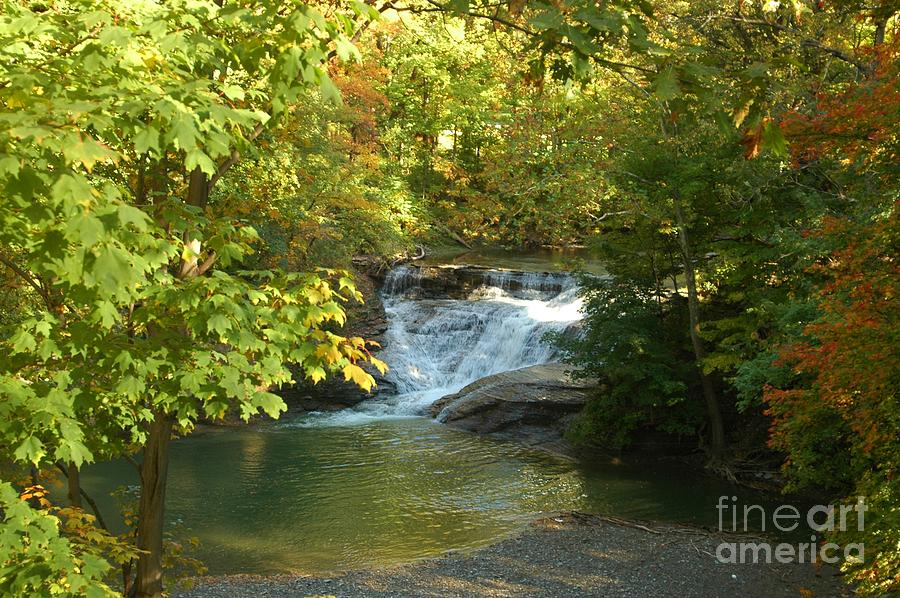 Water falls-Forestville,New York-NY 428 began at an intersection with NY 39 and CR 87 in Forestville. It headed north through the village on Center Street, passing by several blocks of homes and intersecting CR 89 before it exited Forestville. Outside of Forestville in Hanover, NY 428 continued northward as Bennett State Road through farmland, paralleling both CR 89 and Walnut Creek to the hamlet of Keaches Corners, where it met CR 84.[5][6]

The highway continued onward through open fields, intersecting CR 86 just before passing over the New York State Thruway (I-90). Past the Thruway, NY 428 continued north along Silver Creek into the village of Silver Creek, where it became known as Division Street at the village line. It followed Division Street for two blocks through a lightly populated area before turning west onto Burgess Street for another two blocks through a more densely populated portion of the community. NY 428 ended at an intersection with US 20 south of the village center.[5][6]

Thank you Eve for the feature in Waterfalls

Great texture, composition, and color, so voted, FAVORED and FEATURED it in the group. . . . .. Then Published it in the Internet publication ARTISTS NEWS.... http://bit.ly/RVPlpf - Anyone can Highlight just the link. Use Ctl-C to copy Ctl-V put in Browser to view the publication. You can then, Tweet, FB, and email, etc a copy of the publication, to those you feel are interested.

Thank you Bob and Nadine for the feature in Artists News.

Thank y ou Shawn for the feature in Seasons of Beauty.

Thank you David and Carol

Thank you Deborah and Dave.

So beautiful and inviting!

A very picturesque waterfall scene! Beautiful photography, Kathleen! Also, thank you very much for voting on several of my images~~sure appreciated!!! F&V!

one could sit here a very long time and be content

Kathleen, I just love waterfall captures, and this one is just awesome in its presentation, which exudes flow and serenity all in one fell swoop! Very well done, and I love it! fave and vote

Thank you Nadine and Bob for the feature in USA Artist news.

Hi Kathleen, This is a beautiful waterfall and like all the greenery. Ruth

Gorgeous shot Kathleen - would love to be sitting on the rocks daydreaming! v/fb/g+1

Kathleen, This is such an awesome photograph of a waterfall gently falling into a pond or a small lake. The details in the small waterfall are fantastic, love the rushing water coming over the rocks and land and the way you have captured the foliage in the leaves on the trees in the foreground is remarkable. Fantastic photo, voted, Tweet, FB and Google+ promoted and chosen as my Pay It Forward in the Lets All Participate Group

Thank you Thank you Eric for the feature in Fresno artist,

thank you Jose for the feature in Stop Time With art.

Hi Kathleen, This is really a pretty scene with the waterfall. Ruth