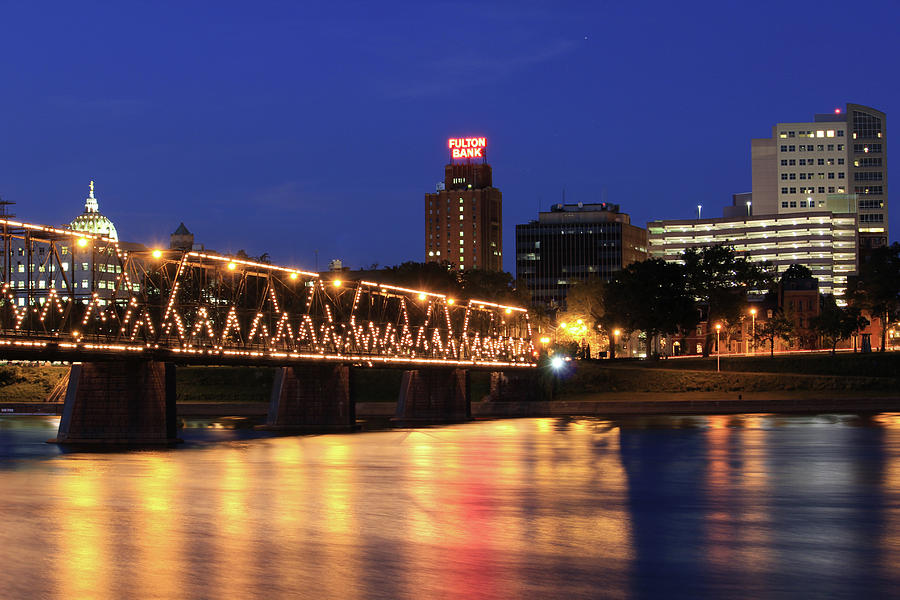 Image by Shelley Neff Photography featuring the historic Walnut Street Bridge and surrounding cityscape illuminated at dusk. Located in Harrisburg, Pennsylvania, USA, �Old Shakey� or The People�s Bridge, which it is also known as, is an iron-truss span that was erected in the late 1800�s by the Phoenix Bridge Company. It is the oldest remaining bridge in the City of Harrisburg and used to be a vital artery connecting the East and West Shores over the Susquehanna River (one of the major tributaries to the Chesapeake Bay). However, during the North American Blizzard of 1996, a large portion of the western span was destroyed by high water and ice. The bridge now only functions as a connector between Harrisburg River Front Park and Harrisburg�s City Island, which is the home of Metro Bank Park and the Harrisburg Senators, a Double A affiliate of the Washington Nationals, the Pride of Susquehanna Riverboat and the John Harris Trading Post. As a result of damage from the Hurricane Agnes flooding in 1972, the bridge was decommissioned as a vehicle bridge and now only carries bicyclists and pedestrians.