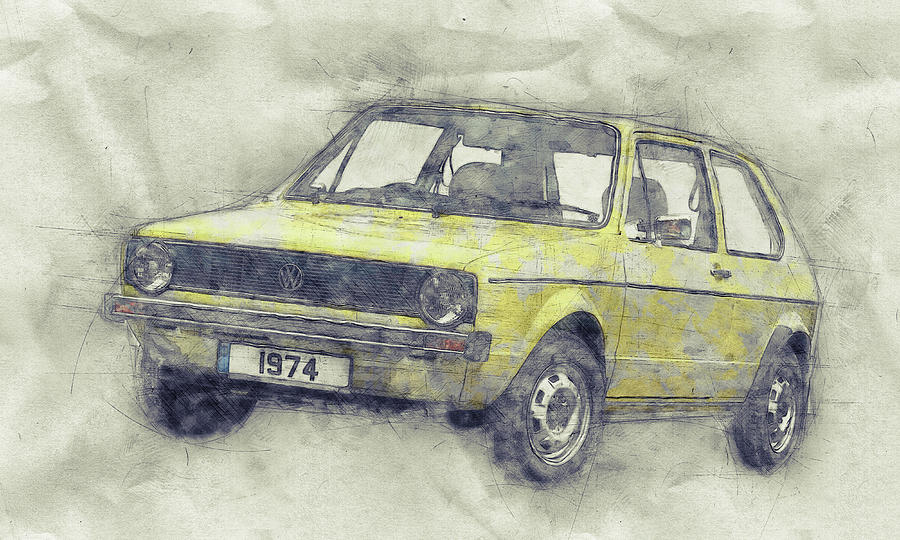 Volkswagen Golf 1 - Small Family Car - 1974 - Automotive Art - Car Posters
Garage Art, Buy art online, Auto poster
The Volkswagen Golf is a small family car produced by the German manufacturer Volkswagen since 1974, marketed worldwide across seven generations, in various body configurations and under various nameplates – such as the Volkswagen Rabbit in the United States and Canada (Mk1 and Mk5), and as the Volkswagen Caribe in Mexico (Mk1). The original Golf Mk1 was a front-wheel drive, front-engined replacement for the air-cooled, rear-engined, rear-wheel drive Volkswagen Beetle. Historically, the Golf is Volkswagen's best-selling model and the world's second best-selling model, with more than 29 million built by 2012.
Initially, most Golf production was in the 3-door hatchback style. Other variants include a 5-door hatchback, station wagon (Variant, from 1993), convertible (Cabriolet and Cabrio, 1979–2002, Cabriolet, 2011–present), and a Golf-derived notchback sedan, variously called Volkswagen Jetta, Volkswagen Vento (from 1992) or Volkswagen Bora (from 1999). The cars have filled many market segments, from basic a personal car, to high-performance hot hatches.
The Volkswagen Golf has won many awards throughout its history. The Golf won the World Car of the Year in 2009, with the Volkswagen Golf Mk6 and in 2013 with the Volkswagen Golf Mk7. The Golf is one of only three cars, the others being the Renault Clio and Opel/Vauxhall Astra, to have been voted European Car of the Year twice, in 1992 and 2013. The Volkswagen Golf has made the Car and Driver annual 10 Best list multiple times. The Golf Mk 7 won the Motor Trend Car of the Year award in 2015, and the Mk1 GTI also won the award in 1985.