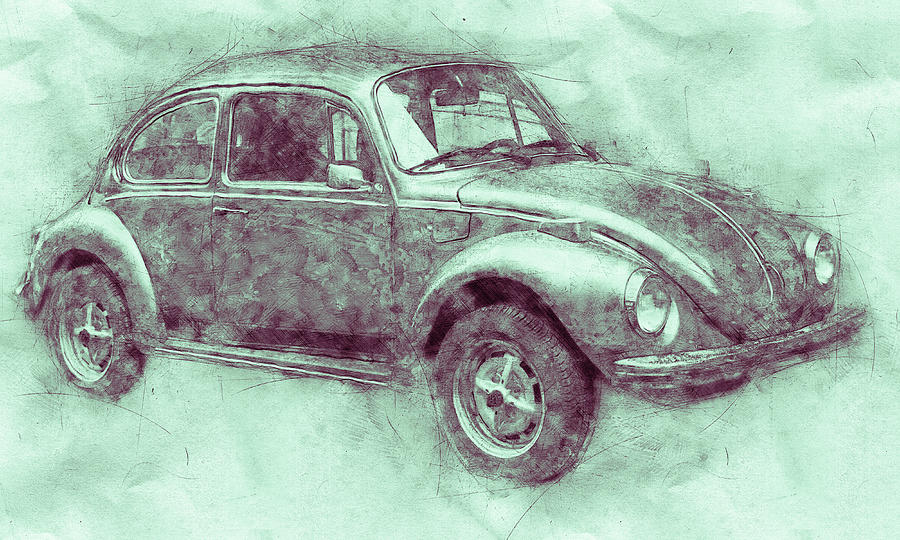 Volkswagen Beetle 3 - Beetle - Economy Car - 1938 - Automotive Art - Car Posters
Garage Art, Buy art online, Auto poster
The Volkswagen Beetle – officially the Volkswagen Type 1, informally in Germany the Käfer (German, "beetle") and in parts of the English-speaking world the Bug[citation needed] – is a two-door, five-passenger, rear-engine economy car that was manufactured and marketed by German automaker Volkswagen (VW) from 1938 until 2003. The need for a people's car ("Volkswagen" in German), its concept and its functional objectives, was formulated by the leader of Nazi Germany, Adolf Hitler, who wanted a cheap, simple car to be mass-produced for his country's new road network. Lead engineer Ferdinand Porsche and his team took until 1938 to finalise the design. The influence on Porsche's design of other contemporary cars, such as the Tatra V570, and the work of Josef Ganz remains a subject of dispute. The result was the first Volkswagen, and one of the first rear-engined cars since the Brass Era. With 21,529,464 produced, the Beetle is the longest-running and most-manufactured car of a single platform ever made.
Although designed in the 1930s, the Beetle was only produced in significant numbers from 1945 on (mass production had been put on hold during the Second World War) when the model was internally designated the Volkswagen Type 1, and marketed simply as the Volkswagen (or "People's Car"). Later models were designated Volkswagen 1200, 1300, 1500, 1302 or 1303, the former three indicating engine displacement, the latter two derived from the type number. The model became widely known in its home country as the Käfer (German for "beetle") and was later marketed as such in Germany,and as the Volkswagen in other countries. For example, in France it was known as the Coccinelle (French for ladybug).