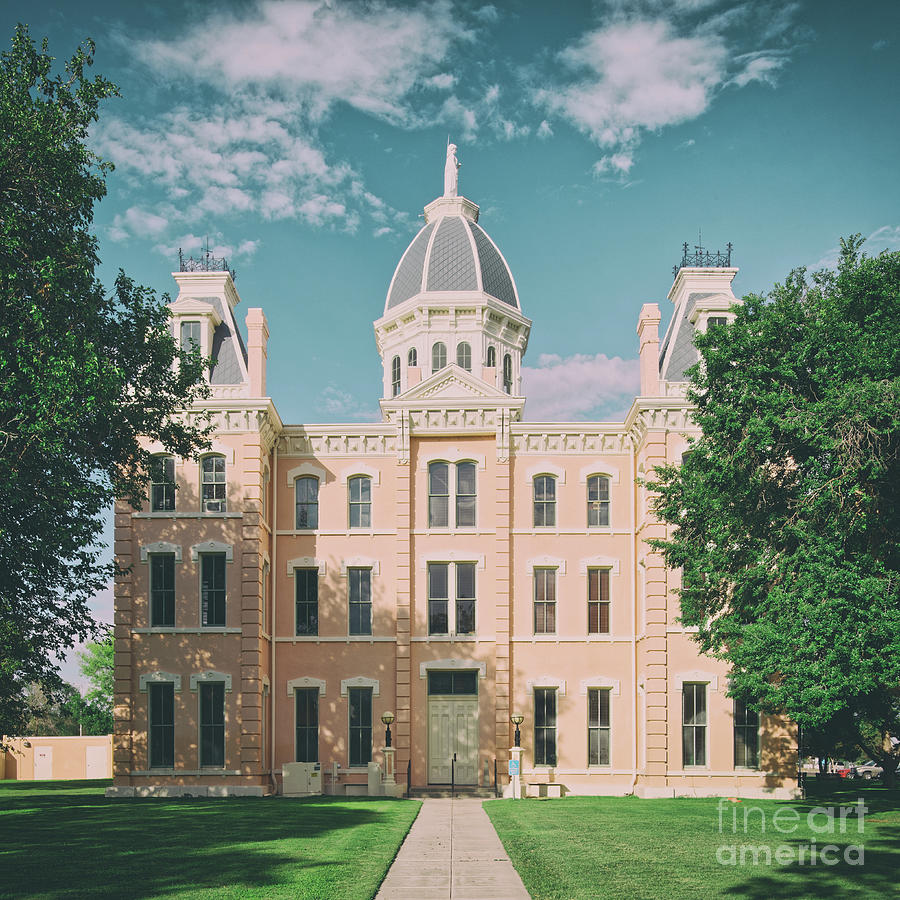 "The west Texas town of Marfa may have the Galveston, Harrisburg and San Antonio Railroad to thank for its status as Presidio County seat. The honors first went to Fort Davis, once part of the expansive county, before the railroad chose to avoid the mountain-bound community in 1882, instead erecting tracks across the wide-open Marfa Plateau and establishing water stops along the way that would develop into full-fledged communities like Marfa. By 1885, county voters made a decision to replace Fort Davis and elect Marfa as the center of Presidio County government.

In need of a courthouse to solidify its new position, the relocated commissioners court issued a call for designs and bids less than six months after the move, advertising in various newspapers including the San Antonio Express for contractors and architects. The call captured the attention of noted San Antonio architect Alfred Giles and the contractor Colonel J. H. Britton.

According to an 1886 article in the Dallas Morning News, the bidding was considered “an exciting contest…Nineteen contractors contested and the bids were close. Col. J. H. Britton and Alfred Giles of San Antonio were the most reasonable bidders and the fight lies between the two…Col. Britton states that Marfa is surrounded by a fine country and has unexcelled water, and the future of the town is bright”. Presidio County commissioners awarded the contract to Britton, resulting in a French Second Empire style courthouse similar to Giles’ design for an El Paso County courthouse (now demolished). Britton and Giles had worked together on the El Paso County courthouse, thus the Presidio County competition, decision, and resulting design established an uncertainty regarding the true architect of the Presidio County courthouse among historians today.

The three-story Second Empire design features Italianate detailing and a large and imposing courtroom spanning the second floor. The central domed tower is octagonal in shape with two large windows on each side. The tower is covered in ornamental shingles and a Goddess of Justice statue is mounted on top. Missing are her scales and the blade of her sword, believed to have been shot off by a citizen unhappy with Presidio County governance. He is rumored to have said “there is no justice in Presidio County” as he shot out her symbolic scales.

The county celebrated the completion of the courthouse in tandem with the New Year on January 1, 1887, hosting a “grand ball”, the first of many social occasions held in and around the courthouse, a tradition that continues today. However, activities including dancing and sleeping inside the courthouse were curtailed in 1919.

The courthouse underwent modifications in 1915 and 1929, the two dates selected for its restoration. The exterior, composed of red brick but later covered in stucco, has been returned to its 1929 iteration (post-stuccoing) while the interior now appears as it did in 1915, all courtesy of a grant from the Texas Historic Courthouse Preservation Program. A general dislike by local citizens for the return of the original French ochre color covering the interior walls required a reiteration of the difference between “renovation” and “restoration”. Electing to restore an historic building requires a return to the state in which the building existed previously, regardless of personal aesthetic tastes. Although the Presidio County courthouse interior walls are once again ochre, the sword and scales originally featured on the exterior Goddess of Justice remain absence in accordance with its pre-1929 “removal”. "