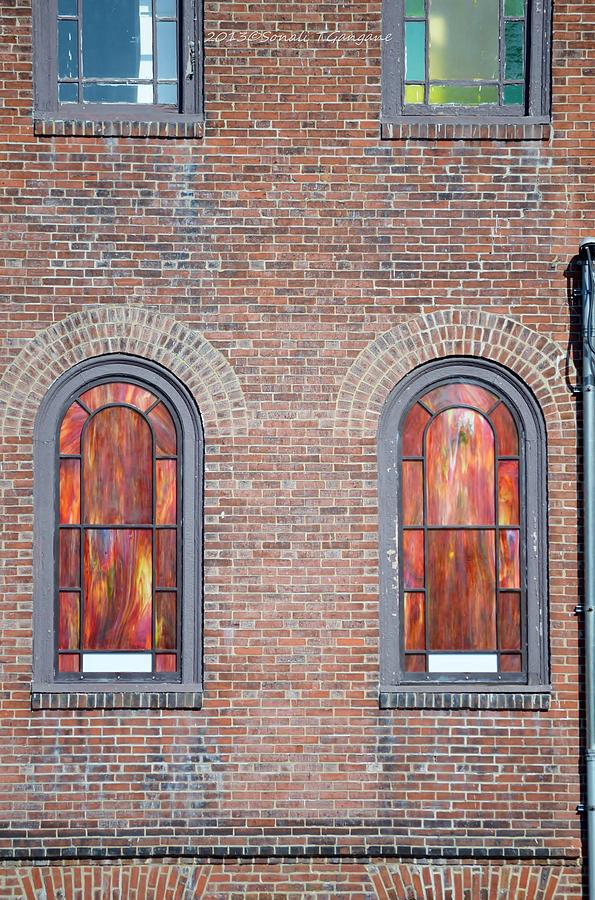 The word window originates from the Old Norse 'vindauga', from 'vindr – wind' and 'auga – eye', i.e. "wind eye". In Norwegian Nynorsk and Icelandic the Old Norse form has survived to this day (in Icelandic only as a less used synonym to gluggi), in Swedish the word vindöga remains as a term for a hole through the roof of a hut, and in the Danish language 'vindue' and Norwegian Bokmĺl 'vindu', the direct link to 'eye' is lost, just like for 'window'. The Danish (but not the Bokmĺl) word is pronounced fairly similarly to window.

Window is first recorded in the early 13th century, and originally referred to an unglazed hole in a roof. Window replaced the Old English 'eagţyrl', which literally means 'eye-hole,' and 'eagduru' 'eye-door'. Many Germanic languages however adopted the Latin word 'fenestra' to describe a window with glass, such as standard Swedish 'fönster', or German 'Fenster'. The use of window in English is probably due to the Scandinavian influence on the English language by means of loanwords during the Viking Age. In English the word fenester was used as a parallel until the mid-18th century and fenestration is still used to describe the arrangement of windows within a façade. Also, words such as "defenestration" are in use, meaning to throw something out of a window.
From Webster's 1828 Dictionary: Window
A window is a transparent or translucent opening in a wall, door or vehicle that allows the passage of light and, if not closed or sealed, air and sound.[1] Windows are usually glazed or covered in some other transparent or translucent material like float glass. Windows are held in place by frames. Many glazed windows may be opened, to allow ventilation, or closed, to exclude inclement weather.The earliest windows were just holes in a wall. Later, windows were covered with animal hide, cloth, or wood. Shutters that could be opened and closed came next. Over time, windows were built that both protected the inhabitants from the elements and transmitted light: mullioned glass windows, which joined multiple small pieces of glass with leading, paper windows, flattened pieces of translucent animal horn, and plates of thinly sliced marble. In the Far East, paper was used to fill windows.[4]

The Romans were the first known to use glass for windows. In Alexandria ca. 100 AD, cast glass windows, albeit with poor optical properties, began to appear. Mullioned glass windows were the windows of choice among European well-to-do, whereas paper windows were economical and widely used in ancient China, Korea and Japan. In England, glass became common in the windows of ordinary homes only in the early 17th century whereas windows made up of panes of flattened animal horn were used as early as the 14th century.[5]

Beautiful windows and brick work--I appreciate the history, too! L

Stunning image with incredible composition, love the windows..stand out so much. V :)

Susan,Feature is very much appreciated In Women Photographers.

Sonali, not only do I totally love this awesome imagery with the brick and the stained glass windows, but just love your description of the windows and the meaning of what is shown here in all its true beauty! Thanks much for sharing! fave and vote

Omaste,Appreciate the feature in ABC group.