View Of Whitby From Scotch Head, Moonlight On The Esk 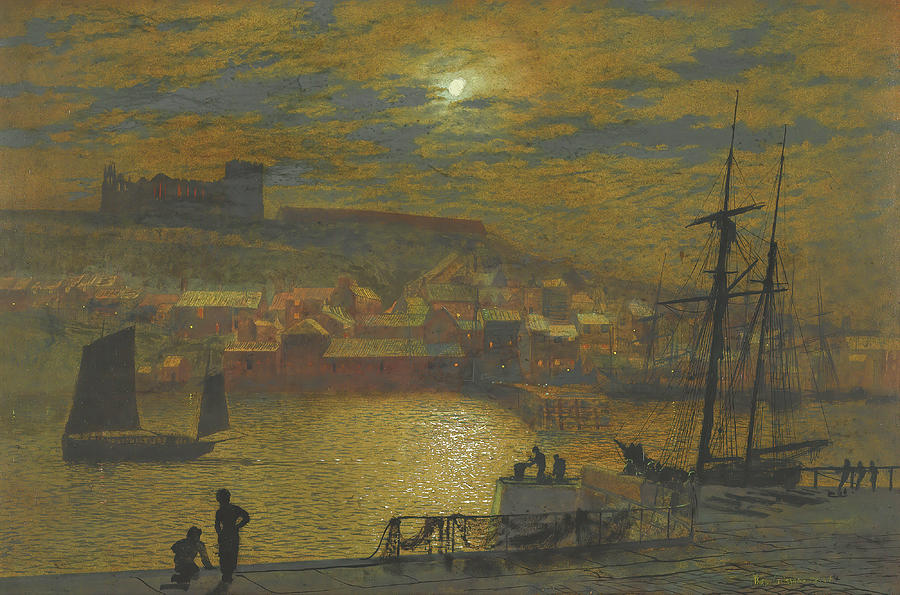 View Of Whitby From Scotch Head, Moonlight On The Esk

"Whitby from Scotch Head, Moonlight on the Esk"

Title: Whitby from Scotch Head, Moonlight on the Esk

Col. Harold Hammond Aykroyd O.B.E. of Whixley Hall near Harrogate, until his death when sold by his widow at Henry Spencer & Sons auctioneers, 4-5 December 1974, lot 132, where bought by the present owner

Today, he is considered one of the great painters of the Victorian era, as well as one of the best and most accomplished nightscape, and townscape, artists of all time. He was called a "remarkable and imaginative painter" by the critic and historian Christopher Wood in Victorian Painting.

Grimshaw's accuracy and attention to realism was criticised by some of his contemporaries, with one critic claiming that his paintings appeared to ‘showed no marks of handling or brushwork’, adding that ‘not a few artists were doubtful whether they could be accepted as paintings at all’. However, other contemporaries recognised his mastery of lighting and technique, and James McNeill Whistler, whom Grimshaw worked with in his Chelsea studios, stated, “I considered myself the inventor of nocturnes until I saw Grimmy’s moonlit pictures”.

In the late 1860s and 1870s Grimshaw became increasingly interested in painting moonlit quaysides. He painted the clamour of the great industrial ports of Glasgow, Liverpool and Hull but he also captured the more intimate fishing-harbour of Whitby on the north-east coast. In 1867 Grimshaw painted Whitby Harbour by Moonlight (private collection) which is thought to have been his first moonlit harbour and from the end of the 1860s, the fishing town was to become a recurring subject.

'The 1870s were the period of Grimshaw's greatest success, with an increasingly popular local reputation, soon to spread to London...' (Alexander Robertson, Atkinson Grimshaw, 1988, p. 35). In 1874 one of Grimshaw's pictures was accepted by the Hanging Committee of the Royal Academy for inclusion in the Summer Exhibition and regular sales of his paintings made him financially more stable than he had been previously. He lived in comfort and style at Knostrop Hall near Leeds and from 1876 he was able to rent a second home at Scarborough, named Castle-by-the-Sea after a poem by Henry Longfellow. It was on this rugged Yorkshire coast that he painted some of his most atmospheric nocturnes including the dramatic The Burning of the Spa Saloon (Scarborough Art Gallery) an event he had witnessed in 1876 and In Peril of 1979 (Leeds City Art Galleries) to the more tranquil Whitby from Scotch Head of 1878 (Richard Green Gallery) and The Lighthouse at Scarborough of 1877 (private collection). The similarity between Grimshaw's atmospheric views of the harbour at Whitby and those by the contemporary photographer Frank Meadow Sutcliffe, has often been noted. Grimshaw and Sutcliffe are not known to have been acquainted and it is more likely that the photographer was influenced by the painter rather than visa versa.

Despite rarely exhibiting his views of Whitby they were immediately popular with collectors. Rather than painting the bustle of the morning when the herring catch was unloaded, as many other artists did, Grimshaw was fascinated by Whitby in the evening and at night when it was quiet and still. The boats are moored and the fishermen and their wives are idly spending the last few hours of the day on the quayside while others have already gone indoors. Firelight can be seen at the windows of their little houses that crowd the steep hillsides and gas-lamps have been lit to light the narrow streets but it is the moonlight that is most powerful, flooding the calm waters of the sheltered harbour. The empty tracery of the windows of the imposing abbey are lit by the last fading light of the sunset.

The contrast of shadows and moonlight in the present picture is typical of Grimshaw's oeuvre during the second half of his career with the typical silhouettes of the boats and the figures on the quay which recall the characteristics of collotype photography. Like James Tissot he was also fascinated by the intricacies of ship rigging and as the masts and ropes of the ship exemplify his attention to these specific details.