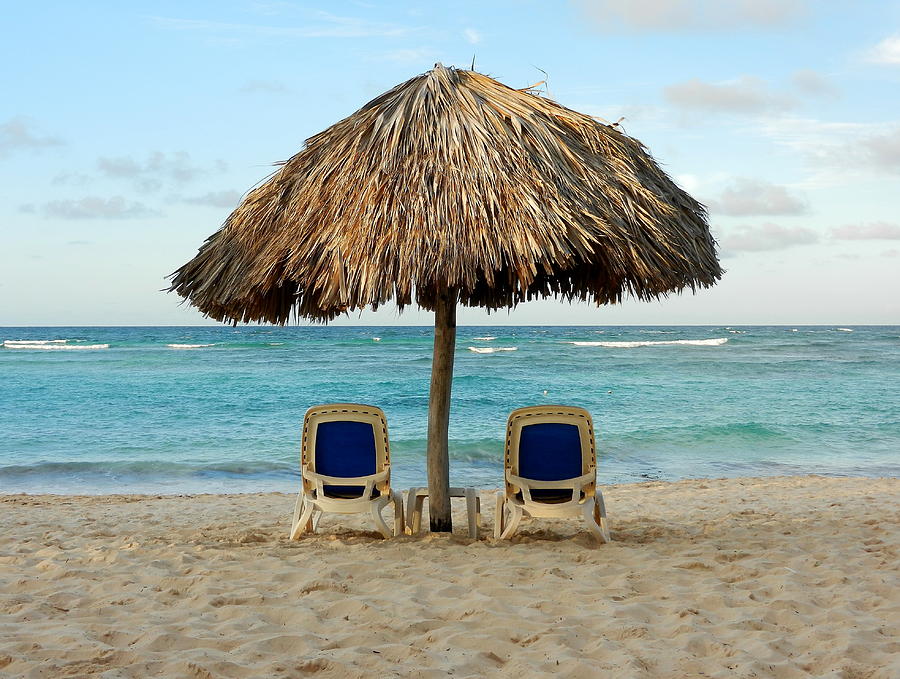 Who wouldn't want to sit in one of these beach chairs, under the large Palapa, staring out at the crystal clear blue Caribbean Sea. This is such a tranquil setting on the beach in Punta Cana, Dominican Republic. The perfect beach vacation spot.
Punta Cana is in the municipality of Higuey in La Altagracia Province. It has beaches that face both the Caribbean and the Atlantic Oceans. The name Punta Cana refers to the cane palms in the area and means "Tip of the White cane Palms". Punta Cana has an estimated population of 100,000. The nearest city is Higuey and it is about a 1 1/2 hour drive. The main beaches from North to South are: Uvero Alto, Macao, Arena Gorda, El Cortecito, Las Corales and Cabeza de Toro, all north of the cape. Punta Cana has a tropical wet and dry climate. The average temperature is 86 degrees Farenheit all year. The hot and humid season is from May to October and there is very little rainfall. Haitains make up over 80 percent of the population.

Congrats...your awesome work has been featured in 500 views group and shared.

I would like to be in one of those chairs

Congratulations on the graduation of this relaxing and well-described seascape from The 200 Club!

congrats on getting over 500 views!

What a beautiful presentation and congrats for the recognition on the feature page!! v/f/t

I definite would like to be there right now! beautiful work!

Very nicely taken and really inviting to have a seat ;) L

thanks for the revisit!

I wanna be there!

Oh yes! Would love to relax there! Great capture!

I would love to be setting there!

wow, this really works! The textures of the grass hut detailed against the calm background is amazing.

thanks for your comments!

A wonderful piece for a calming atmosphere! Congratulations on your sale!

thank you for visiting!

Congrats on your sale..this is so nice!!

congrats on your wonderful sale!

thanks for your comments

I also want there! This image have to be very popular!!!)))

Can I walk into the photo?

haha, I wish! Thanks for visiting

I wanna be there!! Lovely!