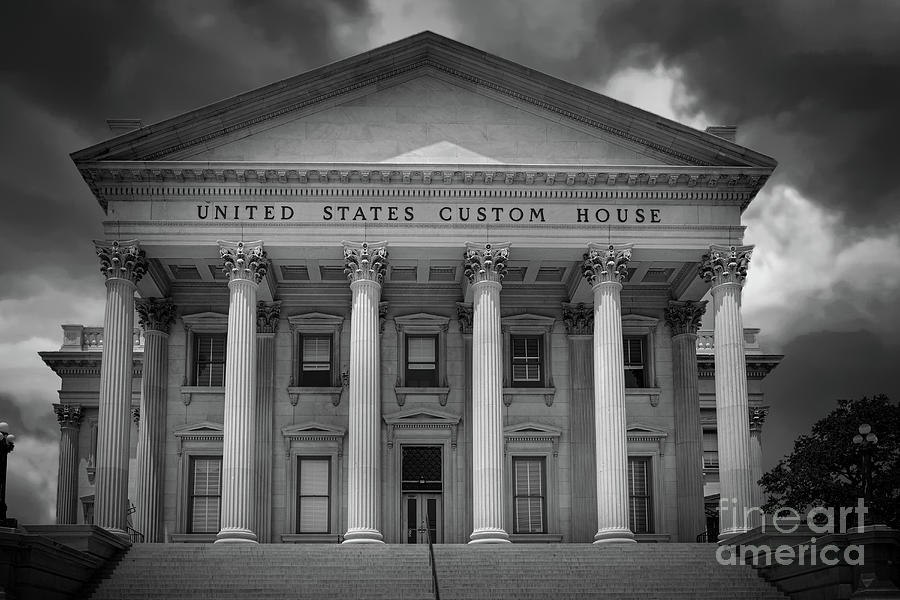 In mid-nineteenth century Charleston, South Carolina, the U.S. Custom Service had outgrown its offices in the 1771 Exchange Building on East Bay Street. Responding to increased trade activity in the Atlantic port city, Congress appropriated funds in 1847 for the purchase of a site for a new custom house. The waterfront site on the Cooper River, purchased for $130,000 in 1849, was then known as Fitzsimmon's Wharf.

In early 1850, private architects were invited to compete for the commission to design the building. Ultimately, none of the entries was chosen as submitted, and Supervising Architect of the Treasury Ammi B. Young incorporated elements from four competition drawings into one cohesive design.

Construction began in 1853, with workers finding the remains of a Colonial-era fortification, Craven's Bastion, while digging the foundation. Due to the marshy location, a grillage of timber was constructed to support the weight of the building. By 1859, the walls and columns had been constructed, but Congress, concerned about escalating costs and the possibility of South Carolina secession, did not appropriate funds needed to complete construction.

The onset of the Civil War brought construction efforts to an indefinite close, and the building sustained considerable damage when it was struck by shells during the bombardment of Charleston. In 1870, work resumed under revised plans that eliminated the original design's domed cupola and side porticos. The building was completed and occupied nine years later at the total cost of $2.8 million. In 1893, a stone wharf was constructed at the east front of the building.

The building served Charleston into the next century, but in 1956, plans to raze it were announced. Due to widespread support for its preservation, however, the government allocated funds for restoration in the 1960s.

In 1960, the building was included in the designation of the Charleston Historic District, which was in the first group of districts recognized as National Historic Landmarks in the United States. The U.S. Custom House was individually listed in the National Register of Historic Places in 1974.

Located in the Charleston Historic District, the U.S. Custom House sits on a site bounded by East Bay, Market, Concord, and Cumberland streets. The building has a cross plan with two facades: the first faces downtown on the west, and the second faces the Charleston Harbor to its east.

Architect Ammi B. Young incorporated Greek and Roman elements into his Classical design. The three story building sits on a podium, and the east and west facades have temple fronts. The basement story is rusticated granite, and broad steps lead to the main entries on the first floor. The bronze doors have molded limestone surrounds and are topped by triangular pediments supported by acanthus leaf consoles. Windows have a similar treatment, with the acanthus leaf consoles supporting both pediments and sills.
Two-story, limestone Corinthian columns support colossal pedimented porticos on the east and west facades. Aligned with the portico columns, Corinthian pilasters separate the bays on both facades, and engaged fluted columns continue around the building. Above the columns, a full entablature has a molded architrave, wide frieze, and dentiled cornice. The frieze is unadorned except on the west facade, where "United States Custom House" was carved in 1964. A balustrade and low pitched roof top the building.
Lobbies at the east and west entries to the building have floors covered with fossiliferous black and white marble tiles laid in a diamond pattern. In the west lobby, a cast-iron stair with decorative railing leads to the second floor. On the second floor, a narrow circular staircase leads to the attic.

The building's interior revolves around the two-story cortile, which early records reference as the Business Room. Originally intended to be a rotunda with a skylit dome, the cortile is square and spans approximately fifty feet in both directions. Similar to the lobby, black and white marble tiles cover the floor. Fourteen cast-iron Corinthian columns border the space and support an ornate cast-iron balcony. Fluted Corinthian pilasters decorate the second floor walls. A coved, stenciled ceiling with eight artificially lit skylights tops the cortile. Painted red, white, blue, and gold, the ceiling is divided into rectangles adorned with patriotic symbols, including American flags and shields, and classical motifs.

The exterior has changed little since the building was constructed, though the interior has been modernized. In 1906, a modern heating system replaced the original stoves and coal grates, and in 1910, plumbing and electric lighting systems were installed.
After the building was saved from potential demolition, the cortile ceiling was restored in 1968. The second-floor courtroom was restored during the 1990s. Between 2000 and 2011, projects included door and plaster restoration, window refinishing, security and elevator upgrades, and repainting public spaces using original color palettes.

Landmark Status:
Listed in the National Register of Historic Places

1974
Building listed in the National Register of Historic Places