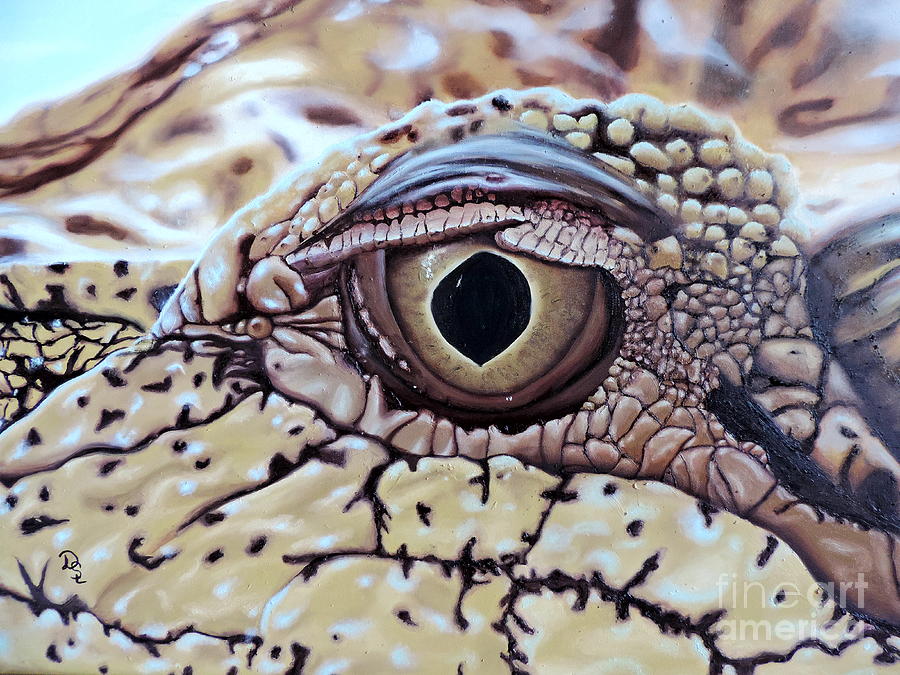 Original Oil Painting by Dianna Lewis. Original work is framed in gold tone with black matting.
Alligator Facts...
Alligators have been living on earth for millions of years and are sometimes described as living fossils.
There are 2 species; American and Chinese.
American Alligators live in South Eastern areas of the U.S. such as Florida and Louisiana. Chinese Alligators are found in Yangtze River though are critically endangered and only a few remain in the wild.
Like other reptiles, Alligators are cold blooded.
Alligators can weigh over 1,000 pounds.
Alligators have a powerful bite though the muscles that open up the jaw are relatively weak. An adult human can hold the jaws shut with his bare hands.
Alligators eat a range of animals such as fish, birds, turtles, and even deer.

Fabulous painting, Dianna! The colors and detail are wonderful. I couldn't guess the animal, so appreciated your description! L/F (And thank you so much for recent features!)

This is clever--and a bit scary too! Well done! Lovely as can be. FAV!

Thanks for the lovely comments Deimante, and Stanza ðŸ˜Š

I really would not like to be this close Dianna, but your painting is awesome :-) L/F

what a beautiful painting, love the details and colours !

Many thanks for the feature Vincent :)

Many thanks for the feature John :)

Congratulations on this marvellous painting being FEATURED in “PAINTING THE OLD WAY” , L/F….group administrator, John Malone (You may also want to participate in our discussion thread, I would appreciate that)

I wouldn't want to get that close to this Joker...great job! V

Many thanks for the feature Navin :)

Thanks for your inspiring words Bruce. :)

Stunning macro capture of this alligator and stunning painting, Dianna. Love the composition, Detail, and colors. Beautiful image!! Well done!! Congratulations, your work has been feature in the group "All Natural Beauty of this World - One per day" and has been selected as one of my Administrators Picks for the day. F/L/T/FB

Nice close up with great detail

This has really nice texture and detail Dianna. /L

This is so great.. Fantastic work.

Awesome detail ! So lifelike!! I love it !

Old Zen saying, Dianna: The eye that you see (even up close & personal)... sees you! It's very kind of you to add my "River" to your group.

Thanks for the feature Gina :-)

Many thanks for the feature Romuald :-)