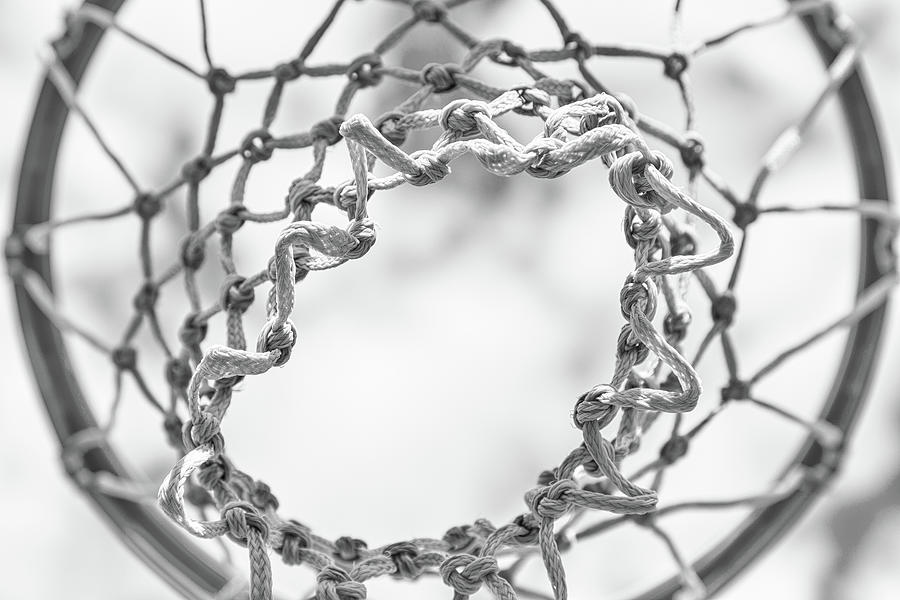 Under The Net - Original Photography by Karol Livote

Basketball was invented in December 1891 by the Canadian clergyman, educator, and physician James Naismith. Naismith introduced the game when we was an instructor at the Young Men's Christian Association Training School (now Springfield College) in Springfield, Massachusetts. At the request of his superior, Dr. Luther H. Gulick, he organized a vigorous recreation suitable for indoor winter play. The game involved elements of American football, soccer, and hockey, and the first ball used was a soccer ball. Teams had nine players, and the goals were wooden peach baskets affixed to the walls. By 1897-1898, teams of five became standard. The game rapidly spread nationwide and to Canada and other parts of the world, played by both women and men; it also became a popular informal outdoor game. U.S. servicemen in World War II (1939-1945) popularized the sport in many other countries.

A number of U.S. colleges adopted the game between about 1893 and 1895. In 1934 the first college games were staged in New York City's Madison Square Garden, and college basketball began to attract heightened interest. By the 1950s basketball had become a major college sport, thus paving the way for a growth of interest in professional basketball.

The first pro league, the National Basketball League, was formed in 1898 to protect players from exploitation and to promote a less rough game. This league only lasted five years before disbanding; its demise spawned a number of loosely organized leagues throughout the northeastern United States. One of the first and greatest pro teams was the Original Celtics, organized about 1915 in New York City. They played as many as 150 games a season and dominated basketball until 1936. The Harlem Globetrotters, founded in 1927, a notable exhibition team, specializes in amusing court antics and expert ball handling.

In 1949 two subsequent professional leagues, the National Basketball League (formed in 1937) and the Basketball Association of America (1946) merged to create the National Basketball Association (NBA). The Boston Celtics, led by their center Bill Russell, dominated the NBA from the late 1950s through the 1960s. By the 1960s, pro teams from coast to coast played before crowds of many millions annually. Wilt Chamberlain, a center for the Los Angeles Lakers, was another leading player during the era, and his battles with Russell were eagerly anticipated. Kareem Abdul-Jabbar, also a center, came to prominence during the 1970s. Jabbar perfected his famed "sky hook" shot while playing for the Los Angeles Lakers and dominated the opposition.

The NBA suffered a drop in popularity during the late 1970s, but was resuscitated, principally through the growing popularity of its most prominent players. Larry Bird of the Boston Celtics, and Magic Johnson of the Los Angeles Lakers are credited with injecting excitement into the league in the 1980s through their superior skills and decade-long rivalry. During the late 1980s Michael Jordan of the Chicago Bulls rose to stardom and helped the Bulls dominate the NBA during the early 1990s. A new generation of basketball stars, including Shaquille O'Neal of the Orlando Magic and Larry Johnson of the Charlotte Hornets, have sustained the NBA's growth in popularity.

In 1959 a Basketball Hall of Fame was founded in Springfield, Massachusetts. Its rosters include the names of great players, coaches, referees, and people who have contributed significantly to the development of the game.

Thanks for the features in the Lady Photographers group.

Thanks for the features in the Space between group and the SAA Monthly group.

Appreciate all the features in the groups including but not limited to the World at Play group, the Architecture and sports group and the WHAT group.

Congratulations on your sale, Karol.

My previous comment turns out to be a case of "History is only what you remember." I picked up a book on history of basketball at the library. I shoulda got the book first. Almost everything I remembered is incorrect. But the Trotters did beat the pro basketball champs several times and had a rivalry with the Minnesota/LA Lakers.

The reason Naismith was given the assignment was actually to reduce the crime rate in town. In the late 19th C and early 20th, the same athletes played all sports. There was very little specialization. There was no winter team sport between end of football and start of baseball. Trapped by snow from team sports and fed by alcohol, the players had a lot of time to get in trouble. So they did. They needed supervision, and basketball provided it. Few colleges had large gyms. YMCAs had large gyms with elevated running tracks 10 feet off the floor and the baskets were nailed to them. It was standard in Ys. The backboards kept the spectators on the track from interfering with the ball. A cage was built around the court to keep the spectators from interfering. The Trotters could get serious, defeating NBA teams in the 50s and 60s, including the NBA champions. Featured on WHAT Interrobang. LF

Great perspective, Karol. I like the abstract quality of the resultant image. f/l

This is gorgeous Karol