Under Foot Javelina Mom And Babies 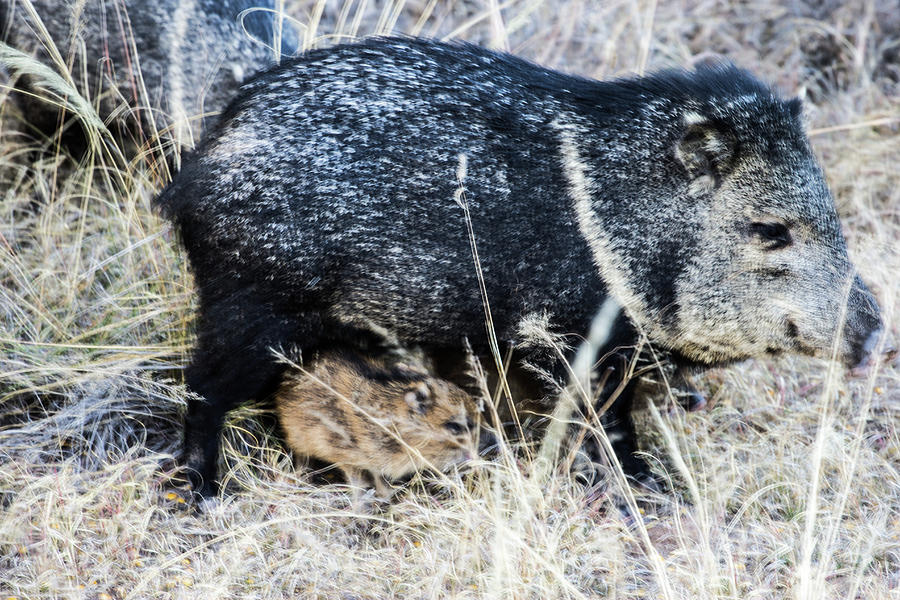 Under Foot Javelina Mom And Babies

Under foot are the babies. Seeking protection they hide under their mother when they sense possible danger. This picture taken in December 2016 ine the Davis mountains of west Texas, near Fort Davis, Marfa, McDonald Observatory, and the Hobby Eberly telescope.

The following is from: http://tpwd.texas.gov/landwater/land/habitats/trans_pecos/big_game/javelina/
"Javelina are members of the peccary family. There are actually three species of peccaries that range from the Southwestern United States south to central South America. The only species found in the United States is the collared peccary, or javelina. In Texas, the javelina is found in the more arid or semi-arid parts of the state, with most occurring in the South Texas brush country, the Trans-Pecos' desert grasslands, and the Edwards Plateau's oak-juniper woodlands.

Javelina travel in small herds or "family groups" and seem to have a somewhat limited home range. In the winter, they are generally active in the early morning and late afternoon. Javelina are largely nocturnal during the hotter times of the year. They feed primarily on cacti (particularly prickly pear), mesquite beans, lechuguilla, sotol, mast, fruits, and insects.

Javelina have long held an undeserved reputation for ferocity. They have poor eyesight and will often remain around humans longer than other wildlife when startled. When cornered, they can defend themselves very effectively with sharp canine teeth or "tusks". Many dogs have been crippled or killed when trying to attack javelina. Yet aggressive encounters with humans are very, very rare. , javelina can be very troublesome to landowners when they become habituated to homes and human activities. They often sleep in caves, and cave like areas, and seem to find the crawl spaces under homes attractive. They may cause significant damage to yards and sprinkler systems because of their habit of rooting for food."