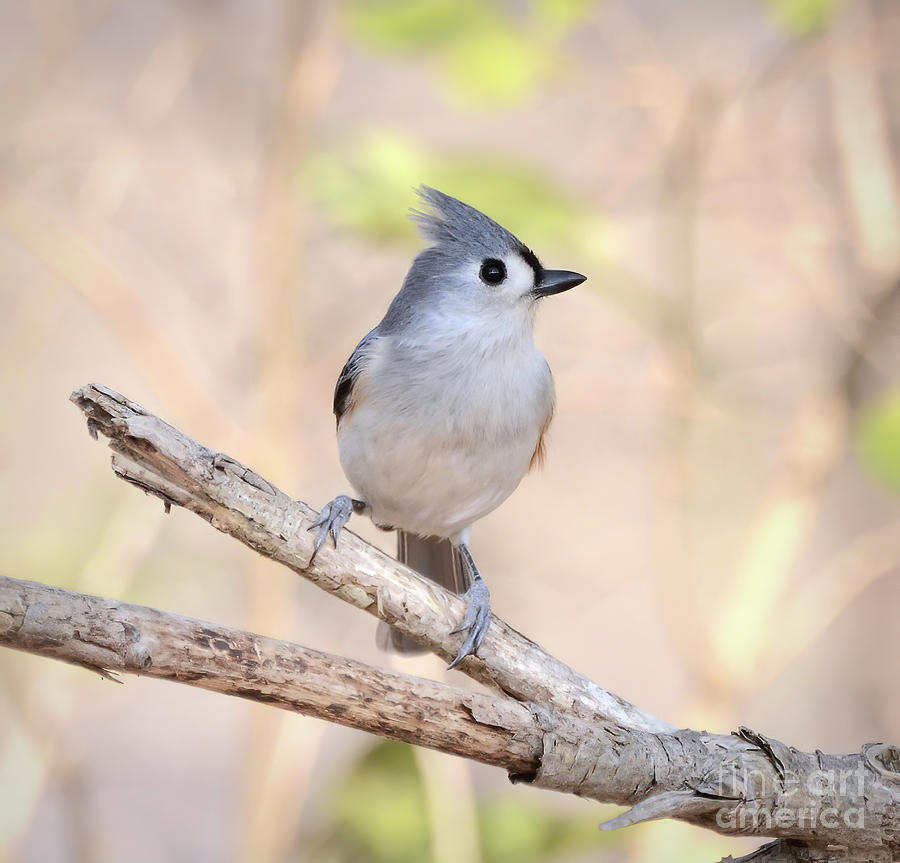 "The tufted titmouse (Baeolophus bicolor) is a small songbird from North America, a species in the tit and chickadee family (Paridae).

These small birds are approximately six inches (15 cm) in length, with a white front, and grey upper body outlined with rust colored flanks. Other characteristics include their black foreheads, and the tufted grey crest on their heads.

The song of the tufted titmouse is usually described as a whistled peter-peter-peter, although this song can vary in approximately 20 notable ways.

Its habitat is deciduous and mixed woods as well as gardens, parks, and shrublands. Although the tufted titmouse is non-migratory and originally native to Ohio and Mississippi, factors such as bird feeders have caused these birds to occupy a larger amount of territory across the United States and stretching into Ontario, Canada. From 1966 - 2015 the tufted titmouse population has increased by more than 1.5% per year throughout the northeastern U.S., Michigan, and Wisconsin.

The tufted titmouse gathers food from the ground and from tree branches. It eats berries, nuts, insects, small fruit, snails, and seeds. Caterpillars constitute a major part of its diet during the summer. Titmice will stash food for later use. The titmouse can demonstrate curiosity regarding humans, and sometimes will perch on a window ledge and seem to be peering into the house. It may cling to the windows and walls of buildings seeking prey in wasp and hornet nests.It is a regular visitor around bird feeders.Its normal pattern is to scout a feeder from cover, fly in to take a seed, then fly back to cover to eat it.

Tufted titmice nest in a hole in a tree, either a natural cavity, a human-made nest box, or sometimes an old woodpecker nest.[11] They line the nest with soft materials, sometimes plucking hair from a live animal such as a dog. If they find snake skin sheddings, they may incorporate pieces into their nest. Eggs measure under 1 inch (2.5 centimetres) long and are white or cream-colored with brownish or purplish spots.

The lifespan of the tufted titmouse is approximately 2.1 years, although it can live for more than ten years. On average, these birds will have a clutch size of five to seven eggs. Unlike many birds, the offspring of tufted titmice will often stay with their parents during the winter, and even after the first year of their life. Sometimes, a bird born the year before will help its parents raise the next year's young."

WATERMARK WILL NOT
APPEAR ON FINAL PRODUCT

Congratulations! This fine image of an identified wild bird is now featured on the homepage of Wild Birds Of The World - A Nature Photography Group. Please take a moment to add it to the 2021 Features Archive and Thanks discussion for additional visibility.

That is stunning Kerri so crisp in detail L/F