Truthful Lion And Darkness Bird In The Senet Game 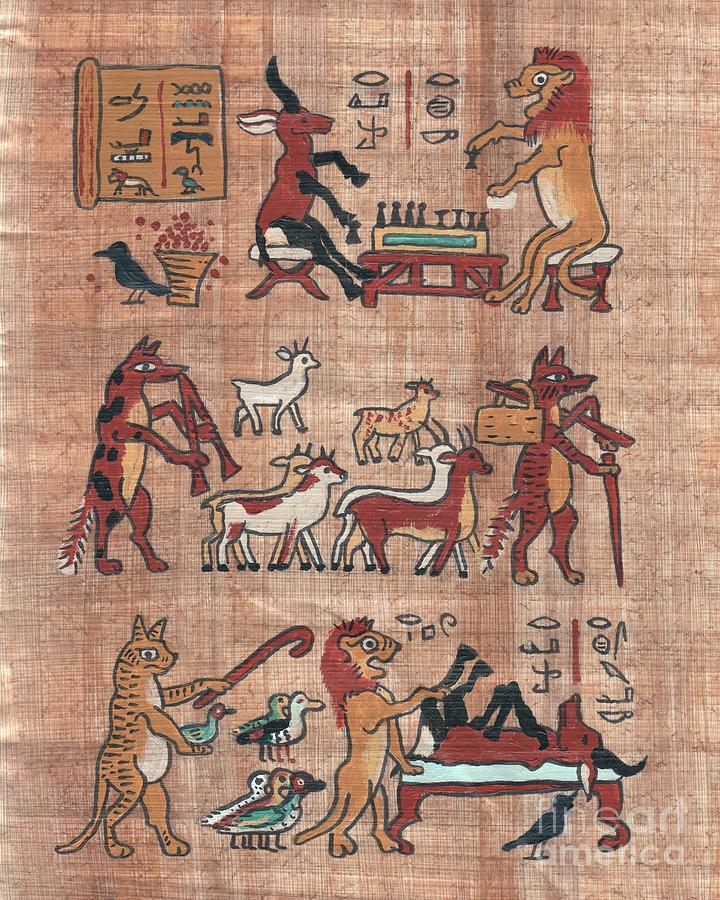 Truthful Lion And Darkness Bird In The Senet Game

Painting - Acrylic And Ink On Papyrus

This is a recreation of a 3,500-year-old comic strip that the British Museum calls, "Animals Acting Like People".

The raven plays with a basket of berries, because there is nothing else to eat, while the hartebeest has challenged the lion to a game of Senet, thinking things are going to be fine. The lion is trying to talk some sense into him. He tells stories about other times prey-animals have trusted predators, such as when the dogs had a party for a herd of goats, and a cat shepherded some ducks. It appears the hartebeest didn't listen to the truth, because he ends up on a funerary table with the raven looking on. The two friends will be eating well later.

My son says the moral of this comic is: When someone tells you who they are, believe them. I think it's: Ignore evidence at your own peril.

The papyrus in the upper left is the title of the comic: [mꜣꜥmꜣi ḥnꜥ kkw] Ma-aah-ma-yeh hen-aah kekoo, Truthful Lion and Darkness (Bird). The words for True-of-speech and Lion are related, forming a harmony, or ma'at. Kekoo describes the raven's color as well as bringing to mind innocence or ignorance, as this is the darkness of someone about to be born or awakened. Aloud, it also reflects her caw.

In the first panel, the lion tells the hartebeest [rdi-i rḥ k] redyeh-yeh rehh ke, or, "I will talk sense into you..."

In the last panel, one consonant changes, for more ma'at, [rpw rdi-i rḥs k] repoo redyeh-yeh reh-hes ke. "...or, I will bring you to your slaughter."

Although this piece updates an ancient bit of artwork on sustainable papyrus with safe, modern paint in period colors, this is an original painting and translation, and it is not in the public domain.