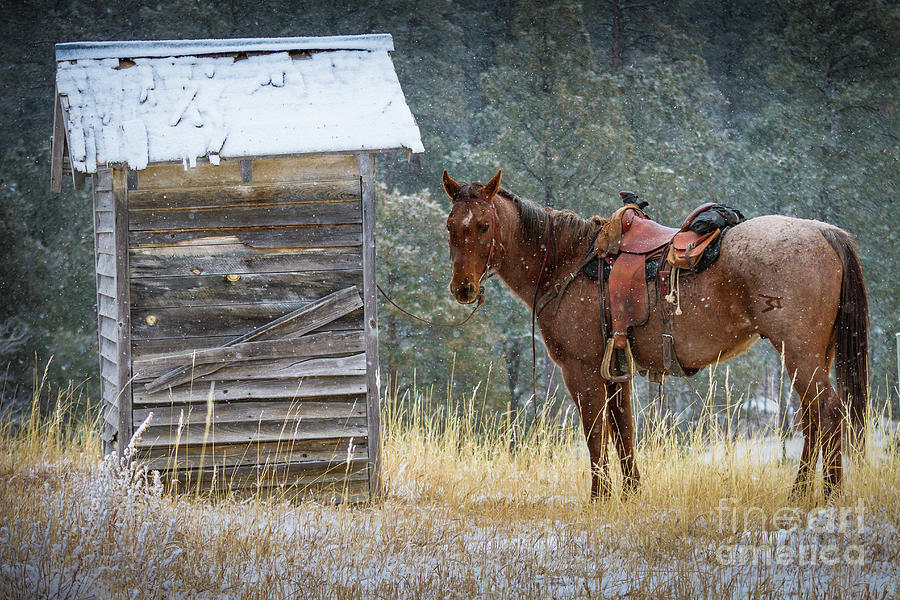 Horse on ranch in northeastern Wyoming
.....
The Black Hills are a small, isolated mountain range rising from the Great Plains of North America in western South Dakota and extending into Wyoming, USA. Harney Peak, which rises to 7,244 feet, is the range's highest summit. The Black Hills encompass the Black Hills National Forest and are home to the tallest peaks of continental North America east of the Rockies. The name "Black Hills" is a translation of the Lakota Pah� S�pa. The hills were so-called because of their dark appearance from a distance, as they were covered in trees. Native Americans have a long history in the Black Hills. After conquering the Cheyenne in 1776, the Lakota took over the territory of the Black Hills, which became central to their culture. In 1868, the U.S. government signed the Fort Laramie Treaty of 1868, exempting the Black Hills from all white settlement forever. However, when European Americans discovered gold there in 1874, as a result of George Armstrong Custer's Black Hills Expedition, erstwhile miners swept into the area in a gold rush. The US government re-assigned the Lakota, against their wishes, to other reservations in western South Dakota. Unlike most of South Dakota, the Black Hills were settled by European Americans primarily from population centers to the west and south of the region, as miners flocked there from earlier gold boom locations in Colorado and Montana.

Inge, Stunning work!!.. Your Work has been Featured On The Home Page of Weekly Fun For All Mediums...Congrats!!!

Your artwork recently submitted to our group WFS, has been chosen to be featured on our homepage with other members of our family of friends and fine artists. Thanks for sharing the beauty.

congrats Inge on your sale

congratulations on your sale. love the imagery.

It is so cute! Lovely!

Congratulations on the sale! Great job!

Love the 'Hurry Up Already' expression! Congratulations on this sale, Inge! LIked.

Oh ya, Congratulations on your $ale! (HA! TWO comments!!)

I love this, congrats on your sale

Love this! Congrats on the sale! v/f

Inge, Such a beautiful horse and composition! I'm a Country girl, and this is right up my alley! Always wanted a horse, but had to settle for riding horses of my friends. That's okay.

Thanks. This was a fantastic trip to a working ranch in Wyoming. There is snow in the air if you look closely.

Inge, I love this other piece of your west serie...reminds me Wyoming!

Thank you, my friend. This was meant to be a little bit humorous as the horse is waiting by the outhouse (bathroom) :-)