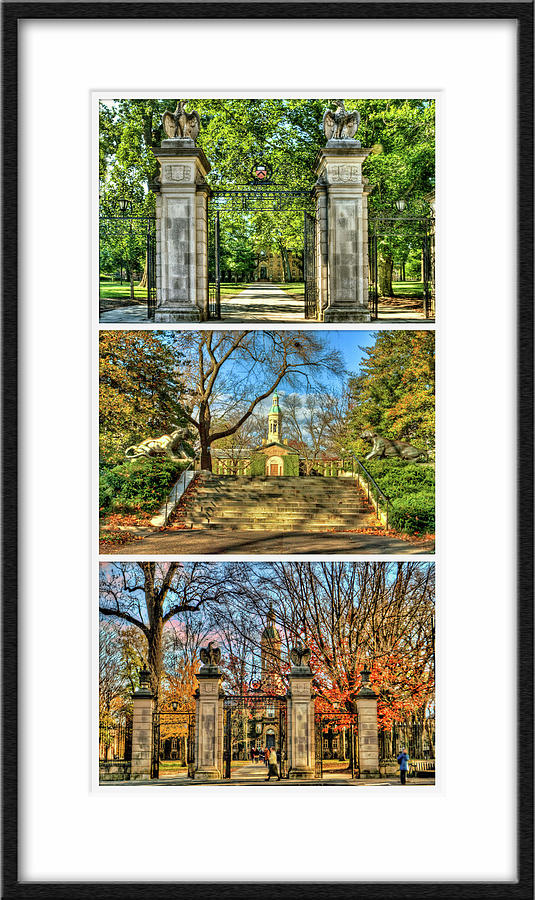 Founded in 1746 in Elizabeth as the College of New Jersey, Princeton was the fourth chartered institution of higher education in the Thirteen Colonies[7][a] and thus one of the nine colonial colleges established before the American Revolution. The institution moved to Newark in 1747, then to the current site nine years later, where it was renamed Princeton University in 1896.[12]

Princeton provides undergraduate and graduate instruction in the humanities, social sciences, natural sciences, and engineering.[13] It offers professional degrees through the Woodrow Wilson School of Public and International Affairs, the School of Engineering and Applied Science, the School of Architecture and the Bendheim Center for Finance. The university has ties with the Institute for Advanced Study, Princeton Theological Seminary, and the Westminster Choir College of Rider University.[b] Princeton has the largest endowment per student in the United States.[14]

The university has graduated many notable alumni. It has been associated with 41 Nobel laureates, 21 National Medal of Science winners, 14 Fields Medalists, the most Abel Prize winners and Fields Medalists (at the time of award) of any university (five and eight, respectively), 10 Turing Award laureates, five National Humanities Medal recipients, 209 Rhodes Scholars, and 126 Marshall Scholars.[15] Two U.S. Presidents, 12 U.S. Supreme Court Justices (three of whom currently serve on the court), and numerous living billionaires and foreign heads of state are all counted among Princeton's alumni. Princeton has also graduated many prominent members of the U.S. Congress and the U.S. Cabinet, including eight Secretaries of State, three Secretaries of Defense, and two of the past four Chairs of the Federal Reserve.

** IF THE IMAGE EXCITES YOU

** INTENT OF THE ARTISTS

** YOUR STORY OF ART

** IF THE IMAGE EXCITES YOU

** OUT OF THE ORDINARY

** ART FROM THE PAST WITH A HUMAN TOUCH

One of your peers nominated this image in the 1000 views Groups Special Features Nominations For Promotion #22 . Please help your fellow artists by visiting and passing on the love to another artist in the the 1000 Views Group....L/F/Tw

Congrats !! Your beautiful artwork has been featured in IF THE IMAGE EXCITES YOU group. You are invited to promote your artwork in “Thank you and Promote” discussion thread of the group. Thanks for sharing.

What a perfect choice of images for this wonderful Princeton triptych, Geri! Nominating for a special feature in 1000 Views! f/t

Nominating this beautiful artwork for a special feature in the 1000 Views Group! FT

Congratulations, your amazing image has been featured in the Intent of the Artist group -- thanks for sharing it with us! Please feel free to add it to the latest Feature Archive in the Discussion section (using the "embed" link on your image page)

Congratulation.....your wonderful work has been featured in the 1000 Views on 1 Image Group ..... Feel free to place your featured image in the Features Archive and any Genre specific Archive l/f/p

Thank you very much Shoal !~

This is an amazing triptych piece, I love the selection of images

Thank you very much CIndy !