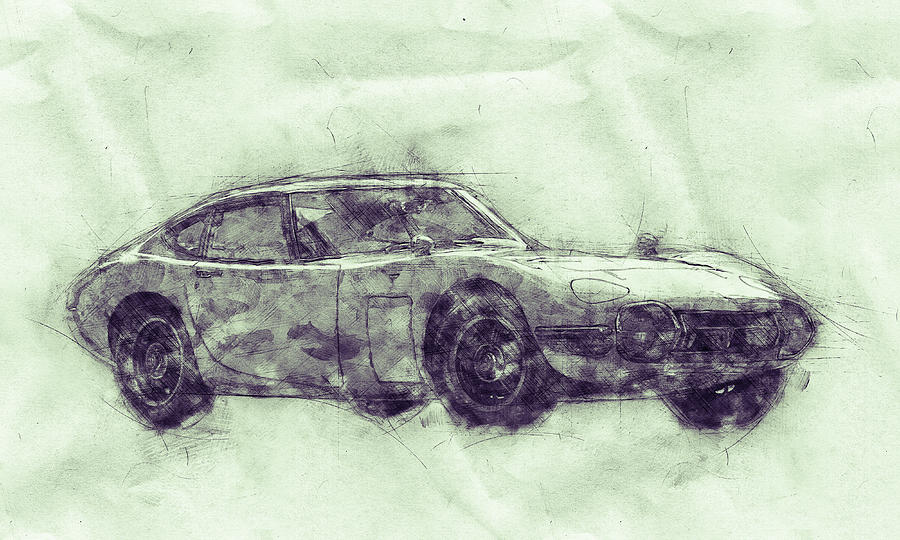 Toyota 2000GT 3 - Sports Car - Grand Tourer - 1967 - Automotive Art - Car Posters
Garage Art, Buy art online, Auto poster
The Toyota 2000GT is a limited-production, front-engine, rear-wheel drive, two-seat, hardtop coupé grand tourer designed by Toyota in collaboration with Yamaha. First displayed to the public at the Tokyo Motor Show in 1965, the 2000GT was manufactured under contract by Yamaha between 1967 and 1970. In Japan, it was exclusive to Toyota's Japanese retail sales channel called Toyota Store.
The 2000GT revolutionized the automotive world's view of Japan, then viewed as a producer of imitative and stodgily practical vehicles. As a sleek, high-performance fastback, it demonstrated its auto makers could produce a sports car to rival the better marques of Europe. Reviewing a pre-production 2000GT in 1967, Road & Track magazine summed up the car as "one of the most exciting and enjoyable cars we've driven", and compared it favorably to the Porsche 911. Today, the 2000GT is seen as the first seriously collectible Japanese car and its first supercar. Examples of the 2000GT have sold at auction for as much as US$1,200,000.
Most of the 2000GT's design was done by Yamaha, which also did much automobile work for other Japanese manufacturers, originally for Nissan rather than Toyota. Many credit the German-American designer Albrecht Goertz, a protégé of Raymond Loewy who had previously worked with Nissan to create the Silvia, as inspiration. He had gone to work for Yamaha in Japan in the early 1960s to modernize Nissan's two-seater Fairlady sports car. A prototype 2000GT was built, but Nissan declined. Yamaha then proposed the design to Toyota, for whom they also did contract work, then perceived as the most conservative of the Japanese car manufacturers. Wishing to improve their image, Toyota accepted the proposal, but employed a design from their own designer Satoru Nozaki.