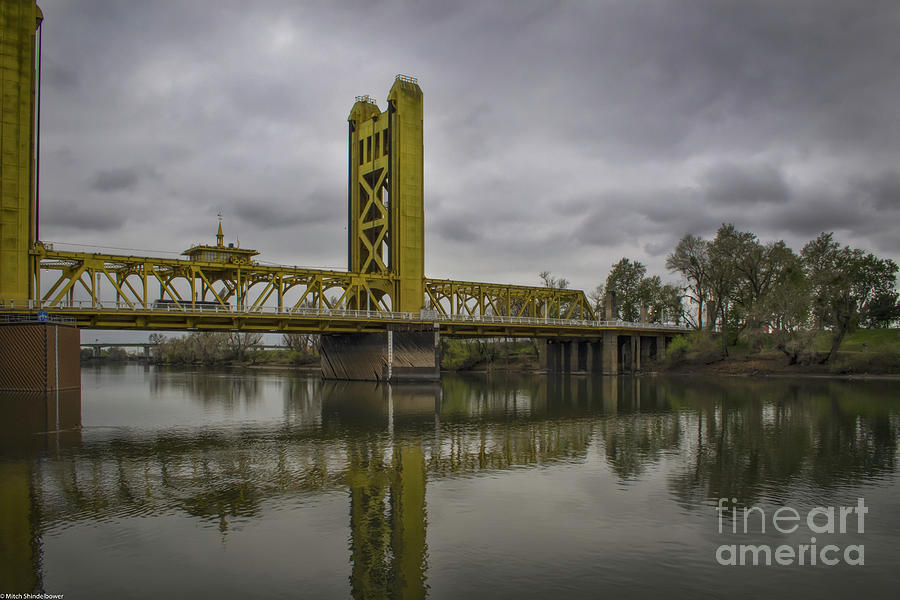 In 1982, the Tower Bridge was added to the National Register of Historic Places...The Tower Bridge replaced the 1911 M Street Bridge in Sacramento,[5] which was originally a swing through-truss railroad bridge. Later, 9-foot (2.7 m) roadway sections were added as cantilevered sections on both sides of the existing rail bridge.[4] Sacramento's population more than doubled between 1910 and 1935, rendering the existing bridge inadequate. In 1933, the city realized that it needed a better crossing over the Sacramento River in case of war.[1]

On December 22, 1933, the State of California, Sacramento County, and the Sacramento Northern Railway held a conference to plan the new bridge, with an agreement reached on March 8, 1934. Under the terms of the agreement, Sacramento Northern Railway relinquished its rights to the 1911 M Street Bridge in return for the rights to rail traffic over the new bridge until March 21, 1960, which was the original expiration date of its franchise to operate rail traffic over the 1911 bridge.[6] Construction commenced on July 20, 1934. Road traffic was diverted to the I Street Bridge, and rail traffic was diverted to a temporary timber-and-steel "shoofly" bridge approximately 75 ft (23 m) of the existing M Street Bridge...Tower Bridge was initially designed with a 52 ft (16 m) wide roadway with sidewalks, with single lanes for cars flanking a large 13-foot (4.0 m) center lane for trains.[4] The towers are 160 ft (49 m). From east to west, the bridge consists of a 30 ft (9.1 m) long girder span, a 167 ft (51 m) long eastern truss approach span, the 209 ft (64 m) long central lift span, a 193 ft (59 m) long western approach span and four 34 ft (10 m) long girder spans. With the draw up, there is 100 feet (30 m) of vertical clearance above high water with a 172-foot (52 m) wide navigation channel between the timber pier fenders. Although the lift span weighs 1,150 short tons (1,040 t), the use of an equal amount of counterweights (located in each tower) means the span is operated with two relatively small 100-horsepower (75 kW) electric motors.[4]

The bridge style represents a rare use of Streamline Moderne architectural styling in a lift bridge, making it an outstanding expression of the social and architectural climate of the period of construction.[1] The lift span towers were sheathed in steel to streamline its appearance.[6] The American Institute of Steel Construction gave the Tower Bridge an honorable mention for its Class B prize bridge award in 1935.[7][8]

On December 15, 1935, then-governor Frank Merriam dedicated the bridge, and led the inaugural parade across it. 1000 homing pigeons were released to carry the news throughout California.[4] The first train had crossed the bridge on November 7, 1935.[6] The Tower Bridge was the first vertical lift bridge in the California Highway System after it was formally accepted by the state on January 11, 1936.[6]

The railroad tracks were removed in 1963.[6] With the removal of the tracks, the roadway was restriped for four automobile lanes. Due to the nearby railroad tracks, the grade crossing on the east side is designed to act as a secondary barrier to exclude vehicular traffic while the bridge is raised. When the warning siren sounds, the crossing activates to block traffic until the bridge is safe for use.

Wonderful atmospheric shot Mitch! I love the reflections and that moody sky!

L/F, An Outstanding Color Tone it has! Beautifully Photographed Mitch!