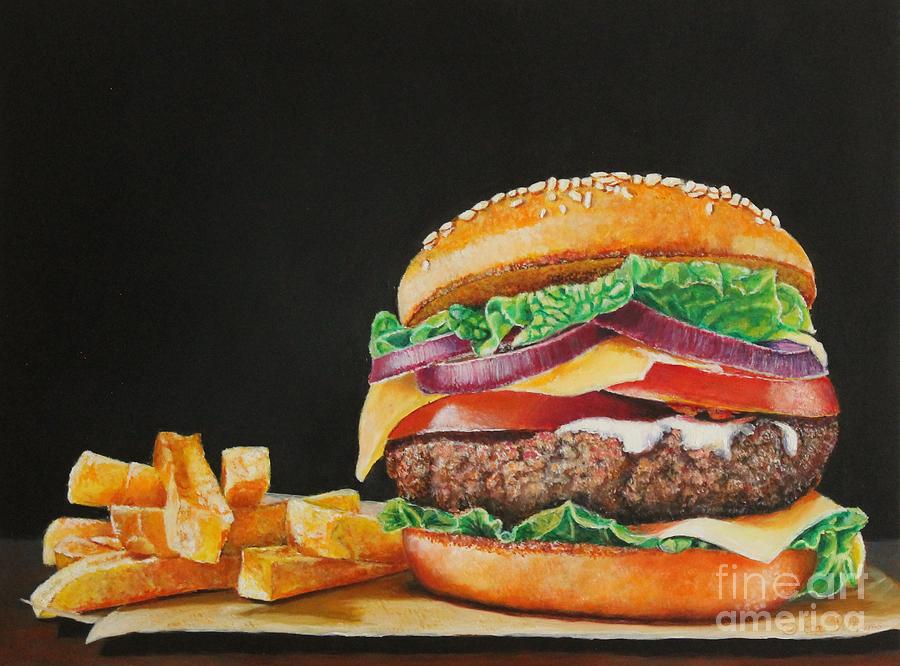 This is a 16 x 20 Oil painting on Clayboard. It is a painting of a Cheese burger and fries (as we all know ) Everyday I was painting this, I got a urge to have a burger that day and sorry to say I did LOL.
There are at least half a dozen claims to who invented the Hamburger! The earliest was Hannah Glasse included a recipe in 1758 as "Hamburgh sausage", which suggested to serve it "roasted with toasted bread under it".
However, it gained national recognition at the 1904 St. Louis World's Fair when the New York Tribune referred to the hamburger as "the innovation of a food vendor on the pike".
The USA calls it the hamburger or Cheeseburger, in the UK it just called " the burger" There are so many variations around the world of the hamburger, which seems to never have any "HAM" in it !

Congratulation's on your Feature in YAHOO DOODLES!

Outstanding composition, lighting, shading, color and artwork! F/L …voted for this one in the OIL PAINTERS OF AMERICA ONLINE SHOWCASE APRIL contest!

Congratulations on your feature in Black Background and Color

Congratulations! Your skillful and interesting painting has been FEATURED on our Homepage!