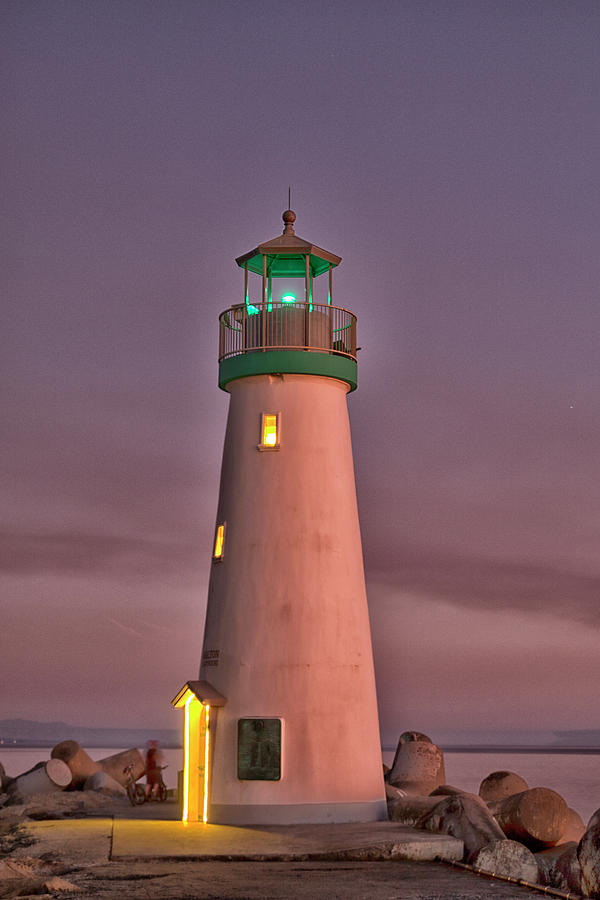 A couple of weeks back with my a dear friend named George, and my sweetheart, we journeyed over at Dusk to the Walton Lighthouse to walk, and photograph. The Light was perfect, and Dusk was quite Beautiful.Located at the northern end of Monterey Bay, Santa Cruz Harbor is a haven for fishing craft and vessels. A harbor light, located at the west jetty, has marked its entrance for forty years. The original light was a box light structure which served from 1964 – 1996. It was replaced by a cylinder nicknamed “the water heater” which was used from 1996 – 1999. From 1999 until May 2002, a simple pipe structure held the light which marked the way into the harbor.
In 1998, the Santa Cruz community, under the leadership of Bill Simpkins and Jim Thoits, proposed replacing the unsightly harbor light with a lighthouse of classic design, adding a little more character to a community renowned for its characters. Fundraising efforts began in earnest, and with the contributions of many people, including a major donation from Charles Walton of Los Gatos, enough money was raised to begin construction of the new lighthouse in 2001.

The lighthouse, designed by Mark Mesiti-Miller and constructed by Devcon Construction, Inc., stands 41 ½ feet tall above the level of the west jetty, and 59 ½ feet above the mean low water mark. It weighs 350,000 pounds and is built to withstand a quarter million pounds of wave energy.

The construction began with a cylindrical inner core which houses electrical equipment and a circular staircase of forty-two steps which lead to the top of the lighthouse. Surrounding the inner core is a network of reinforcement rods, onto which “shotcrete” was blown and then hand-troweled to form the conical shape. These shotcrete walls are 4 ½ feet thick at the base. Finally, a durable weatherproof white finish was applied to the exterior of the lighthouse and a copper roofed lantern room topped it all off.

On June 9, 2002, the new harbor lighthouse was dedicated, and the signal, a green light flashing every four seconds at a focal plane of thirty-six feet, was activated. It is named the Walton Lighthouse, in honor of Mr. Charles Walton’s late brother, Derek, who served in the merchant marines and was lost at sea during World War II.

This is a lovely work of art! I always love visiting your gallery. Well done once again...FAVORITE! Happy New Year!

Thanks Reynold! Wishing you a great 2020 as well!

Congratulations! Your fantastic photographic art has been chosen as a Camera Art Group feature! You are invited to archive your work in the Features Archive discussion as well as any other discussion in which it would fit!

Thanks a lot Veikko!

Thanks so much Carol!!

Such a wonderful picture!