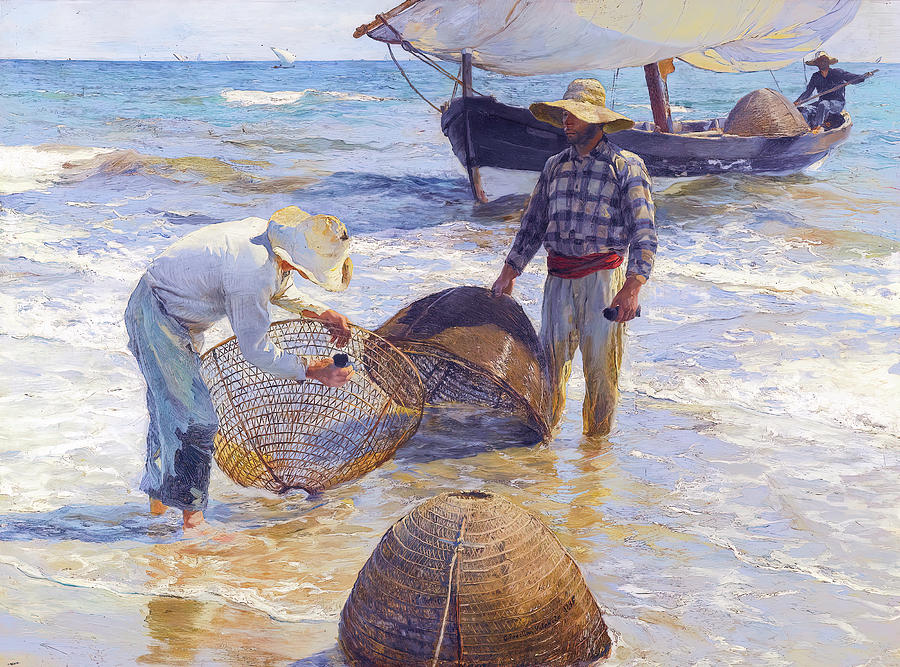 Painted in 1895 on Valencia beach, Valencian Fishermen is Sorolla's brilliant sequel to his painting La vuelta de la pesca (Return from Fishing) painted a year earlier (fig. 1). Celebrating the labour of the local fishermen, from both the present work and Return from Fishing stems the painterly technique and characteristic subject matter that lies at the heart of Sorolla’s aesthetic, a style and theme from which he would draw inspiration repeatedly over the succeeding two decades.

Shaded from the hot sun by their traditional fishing hats and everyday working clothes, the two fishermen in the foreground clean their distinctive bell-shaped creels, the basket-like traps that they used for collecting small fish, shellfish, crabs and lobsters. Behind them a third fisherman lands more creels to scrub down. Set against the lapping shallows of the Valencian sea that washes over the men’s feet, and using a palette of subtle colour gradations that range from the rich earthy tones of the wet sand in the foreground to the deep watery blues beyond, Sorolla fills the composition with the dazzling Valencian light that glints on the whites of the waves and dances across the picture surface.

Sorolla was the first to acknowledge the critical importance of his work of the mid-1890s in establishing his future success. In a letter of 1913 to Rodolfo Gil he wrote: ‘How long did it take me to form my style? Twenty years! … Until my painting in the Luxembourg [Return from Fishing], I was not fully aware of the ideal I was pursuing. It was a laborious process, but a methodical and rational one; gradually the hesitations were ironed out, but not all of a sudden…’ (quoted by Carmen Gracia ‘Sorollism: A Unique Adventure’ in The Painter Joaquín Sorolla, exh. cat., IBM Gallery of Science & Art, New York, and travelling, 1989, p. 38).

It was an admission that was widely shared by later commentators. Describing the central role played by the present work and Return from Fishing in the development of Sorolla’s career, Marqués de Lozoya wrote: 'There is a moment in every artist's career which usually follows many years of strenuous effort, in which experiences are accumulated in an intuition of marvellous clarity; the artist's vision becomes precise and clear; the paths that lead to success are firmly perceived and easily and happily pursued, without any effort at all... For Sorolla this moment arrived with his first beach scenes: Return from Fishing (1894) and Valencian Fishermen (1895) [the present work]... These paintings do not resemble any of those he had painted before and in all of them we find the vigour of the best of Spanish painting.' (Marqués de Lozoya, in Catálogo de la Exposición Sorolla. Su obra en el Arte Español y sus obras en la Argentina, Buenos Aires, 1942).

Sorolla exhibited Return from Fishing at the Paris Salon where it received the highest honours possible for a painter from abroad, and was purchased by the French state to hang in the Musée du Luxembourg. The present work Sorolla submitted to the Berlin International Kunstausstellung the following year, where it was unanimously awarded the gold medal, and was singled out for purchase by the director of the Berlin Nationalgalerie, the influential Hugo von Tschudi.

Although sharing the same theme, the two works are very different in purpose, execution and ambition. Sorolla conceived Return from Fishing specifically for the Paris Salon. Large in size (265 by 325cm.) the individual elements of the composition are painted on a grand scale. The figures – both men and oxen – are monumental, their actions eternal; while their man-handling of the boat with its billowing sail takes on a mythic drama. For Sorolla the painting was arduous work. He mentioned in a letter to his friend Pedro Gil: ‘Thank God we are home after a summer of hard work, because the painting for the Salon was tough. I experienced moments of such difficulty that I had already decided to abandon it, but my own self-respect is stronger than a locomotive…’ (quoted in Joaquín Sorolla, Museo Nacional del Prado, Madrid, exh. cat., 2009, p. 236).

In comparison Valencian Fishermen is much more intimate in feel. Sorolla's facility in recording the moment reflects the same work-a-day honesty as the fishermen's own simple actions cleaning their creels by the water’s edge. Notably smaller in size, it has a fluidity in the brush work and gentle humility in the figures that expresses a profound sense of integrity, that compares closely with the work of Jean-Francois Millet (fig. 2). Sorolla was already familiar with Millet's work, as well as that of other leading French Naturalist painters, but the solemn forms of the fishermen bear such close comparison with Millet's noble peasants that he may well have reacquainted himself with the Frenchman's work when in Paris during June at the time of his Salon triumph with Return from Fishing.

The feeling of closeness to the motif that Valencian Fishermen engenders is also the consequence of a new departure in Sorolla's work - a result of the painting being executed on the beach, making the present work one of his earliest full-scale finished compositions to have been painted en plein air. To accomodate his new 'out-doors' approach, Sorolla streamlined the composition. The zig-zag of diagonals and intersecting triangles that jostle for attention in the structure of Return from Fishing are removed; grandiose gestures are toned down, the baroque drama of the billowing sail is reduced and the horizon line is raised. Unlike Return from Fishing, painted in his studio and which, as he wrote, he struggled to complete, in Valencian Fishermen, men, creels and boat are arranged with apparent ease and understatement against the backdrop of a tranquil sea.

The 'at oneness' with the subject that Sorolla achieves in the painting derives in part from the compelling simplicity of the creel shape. Sorolla embues this humble form with a quasi-totemic presence in the abstracted beauty of the single semi-spherical creel in the centre foreground. Sorolla's reverent depiction of the object - where, significantly, he places his signature - reflects how closely attuned he was to his subject. Creels were very much a feature of the local landscape. Basket-like they were useful not just for catching fish and shellfish but for a variety of other utilitarian purposes. Their construction was a time-honoured technique carried out by specialist craftsmen using rushes, reeds, wicker or oleander branches, and their innate beauty was something that Sorolla gives full expression to in the present painting.

Sorolla's interest in developing the theme of fishermen and their daily lives in his compositions reflected both his strong ties with his native Valencia, and the fashion of the day in painting social realist subjects. His first forays into painting this subject had been in a series of relatively small scale canvases that depict fishermen and their wives carrying out a variety of fishing related tasks painted in 1893-4. For the most part describing interiors, subjects include mending nets, rope-making and boat building; the series was capped off with his dramatically titled and significantly larger And they Still Say Fish is Expensive in which the scene takes place in the hold of a fishing boat (fig. 3). Following his completion of Return from Fishing and the present work, however, Sorolla's subsequent paintings of fishermen are almost always situated outdoors, under the hot Valencian sun with the sea as a backdrop, a theme that reached its dramatic apogee in Sol de la tarde (fig. 4).

Valencian Fishermen was selected for purchase by the innovative new director of the Berlin Nationalgalerie Hugo von Tschudi (1851-1911). Raised in Vienna, his mother a daughter of the painter Julius Schnorr von Carolsfeld, Tschudi first worked at the Österreichisches Museum für Kunst und Industrie in Vienna before becoming the assistant of Wilhelm von Bode at what became the Kaiser-Friedrich-Museum (now the Bodemuseum) in Berlin in 1884. Then, in 1895, he was appointed director of the Nationalgalerie in Berlin in charge of 19th century paintings and acquisitions. In the ensuing years he acquired works by Adolph von Menzel, Wilhelm Leibl, Carl Schuch, Hans Thoma and Max Liebermann, as well as Arnold Böcklin and Hans von Marées. His inclination, however, was to look further afield, and acquire top works by key artists from abroad. During his tenure he purchased fine examples by Courbet, Manet, Renoir and Monet as well as the present work. But in time rumblings of discontent broke out not only among Berlin artists who felt neglected, but also from Emperor William II. By 1909 his position was untenable, and he stepped down, subsequently becoming director of the Bayerische Staatsgemäldesammlung in Munich.