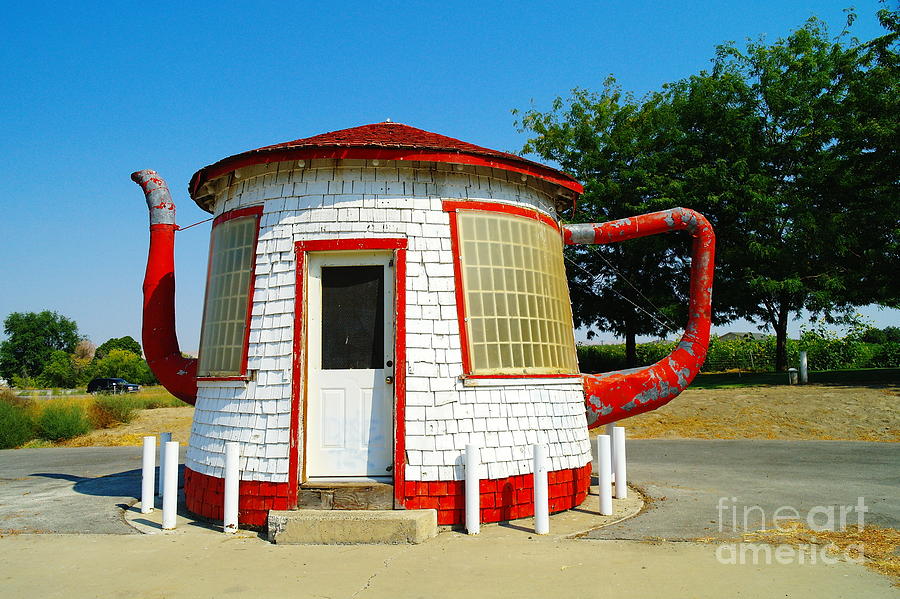 The Teapot Dome Service Station was built in 1922 on what later became U.S. Route 12. The building has a circular frame with a conical roof, sheet metal "handle", and a concrete "spout". The station was intended to be a reminder of the Teapot Dome Scandal that rocked the presidency of Warren G. Harding and sent Interior Secretary Albert Fall to prison for his role in leasing government oil reserves in, among other places, Teapot Dome, Wyoming. The unique service station continued operation as a full-service gas station[2] for some years. When Interstate 82 was constructed near Zillah, the station was relocated less than a mile down the Yakima Valley Highway. It is no longer in operation. In 2007, the City of Zillah purchased the station, and in 2012, relocated and rehabilitated the Teapot Dome Gas Station. The new location is 117 First Avenue, Zillah, Washington.
See also

Thank you Krista May for the feature in Best Artwork Collections

It is kind of cute lol Thanks Nina

lol The Teapot dome was part of a Mafia Scam. It was a service station but they would claim it has a teapot or something like that and fruad the Gov

How unusual! Love it!