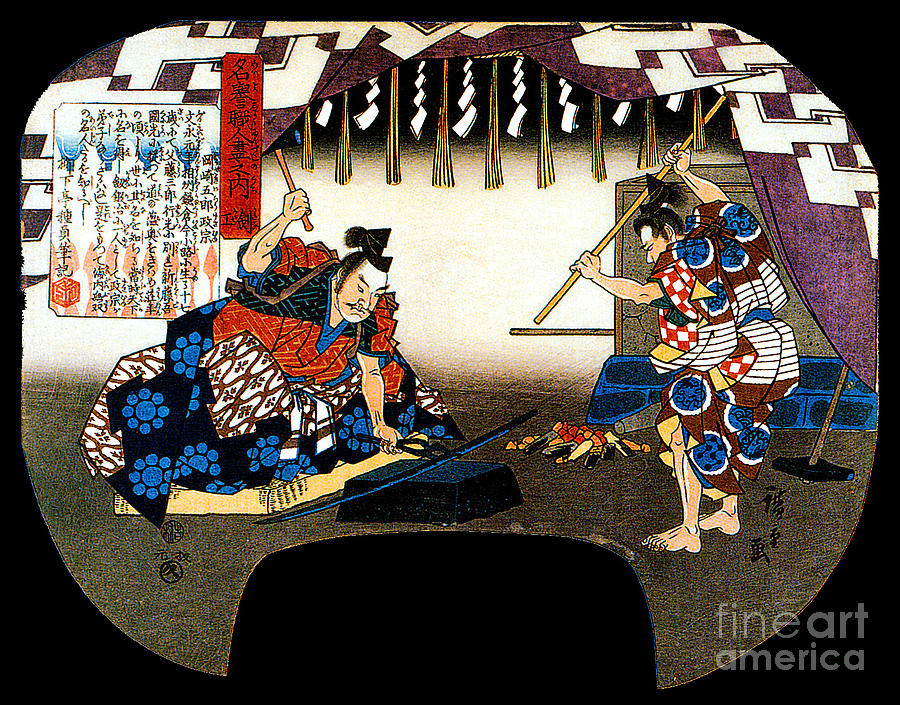 The Swordsmith Okazaki Gorō Masamune, asamune (正宗), also known as Gorō Nyūdō Masamune (五郎入道正宗, Priest Gorō Masamune, c.1264–1343), was a medieval Japanese blacksmith who is widely recognized as Japan's greatest swordsmith. He created swords and daggers, known in Japanese as tachi and tantō respectively, in the Sōshū school. However, many of his forged tachi were made into katana by cutting the tang (nakago) in later times. For this reason, his only existing works are katana and tantō. No exact dates are known for Masamune's life. It is generally agreed that he made most of his swords between 1288 and 1328. Some stories list his family name as Okazaki, but some experts believe this is a fabrication to enhance the standing of the Tokugawa family. Masamune is believed to have worked in Sagami Province during the last part of the Kamakura period (1288–1328), and it is thought that he was trained by swordsmiths from Bizen and Yamashiro provinces, such as Saburo Kunimune, Awataguchi Kunitsuna and Shintōgo Kunimitsu. He was the father of Hikoshiro Sadamune, also a famous Sōshū master. Utagawa Hiroshige Japanese 1797 – 1858, was a Japanese ukiyo-e artist, considered the last great master of that tradition. Hiroshige is best known for his horizontal-format landscape series The Fifty-three Stations of the Tokaido and for his vertical-format landscape series One Hundred Famous Views of Edo. The subjects of his work were atypical of the ukiyo-e genre, whose typical focus was on beautiful women, popular actors, and other scenes of the urban pleasure districts of Japan’s Edo period (1603–1868). The popular series Thirty-six Views of Mount Fuji by Hokusai was a strong influence on Hiroshige’s choice of subject, though Hiroshige’s approach was more poetic and ambient than Hokusai’s bolder, more formal prints. Subtle use of color was essential in Hiroshige’s prints, often printed with multiple impressions in the same area and with extensive use of bokashi (color gradation), both of which were rather labor-intensive techniques.