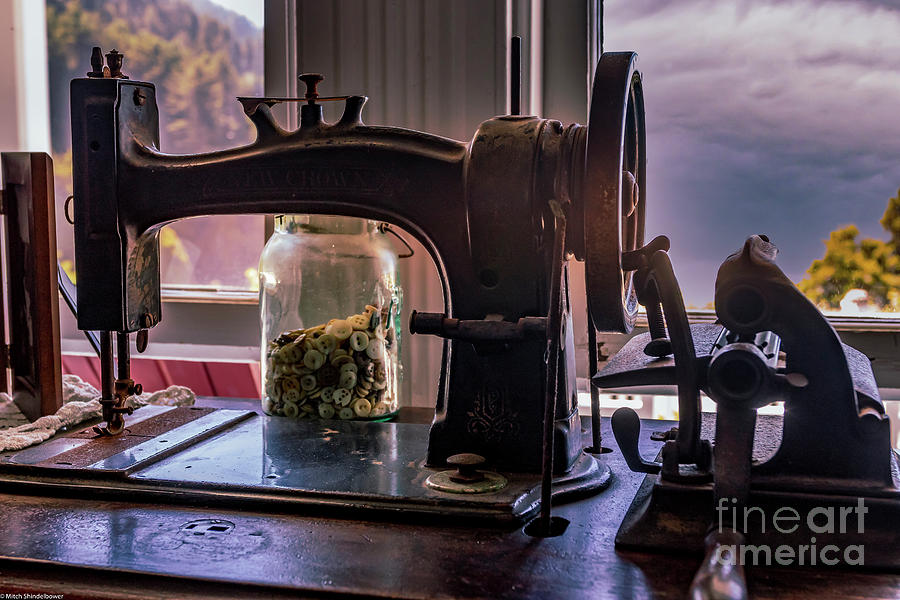 Charles Fredrick Wiesenthal, a German-born engineer working in England was awarded the first British patent for a mechanical device to aid the art of sewing, in 1755. His invention consisted of a double pointed needle with an eye at one end.[2]

Thomas Saint's chain stitch used on the first ever complete sewing machine design for leather work. An awl preceded the eye pointed needle to make a hole in preparation for the thread.

Animation of a modern sewing machine as it stitches
In 1790, the English inventor Thomas Saint invented the first sewing machine design, but he did not successfully advertise or market his invention.[3] His machine was meant to be used on leather and canvas material. It is likely that Saint had a working model but there is no evidence of one; he was a skilled cabinet maker and his device included many practically functional features: an overhanging arm, a feed mechanism (adequate for short lengths of leather), a vertical needle bar, and a looper. Saint created the machine to overall reduce the amount of hand-stitching on garments; making sewing more reliable and functional.

His sewing machine used the chain stitch method, in which the machine uses a single thread to make simple stitches in the fabric. A stitching awl would pierce the material and a forked point rod would carry the thread through the hole where it would be hooked underneath and moved to the next stitching place, where the cycle would be repeated, locking the stitch.[4] Saint's machine was designed to aid the manufacture of various leather goods, including saddles and bridles, but it was also capable of working with canvas, and was used for sewing ship sails. Although his machine was very advanced for the era, the concept would need steady improvement over the coming decades before it could become a practical proposition. In 1874, a sewing machine manufacturer, William Newton Wilson, found Saint's drawings in the UK Patent Office, made adjustments to the looper, and built a working machine, currently owned by the Science Museum in London.

In 1804, a sewing machine was built by the Englishmen Thomas Stone and James Henderson, and a machine for embroidering was constructed by John Duncan in Scotland.[5] An Austrian tailor, Josef Madersperger, began developing his first sewing machine in 1807 and presented his first working machine in 1814. Having received financial support from his government, the Austrian tailor worked on the development of his machine until 1839, when he built a machine imitating the weaving process using the chain stitch.

The first practical and widely used sewing machine was invented by Barthélemy Thimonnier, a French tailor, in 1829. His machine sewed straight seams using chain stitch like Saint's model, and in 1830, he signed a contract with Auguste Ferrand, a mining engineer, who made the requisite drawings and submitted a patent application. The patent for his machine was issued on 17 July 1830, and in the same year, he opened, with partners, the first machine-based clothing manufacturing company in the world to create army uniforms for the French Army. However, the factory was burned down, reportedly by workers fearful of losing their livelihood, following the issuing of the patent.[6]

A model of the machine is exhibited in London at the Science Museum. The machine is made of wood and uses a barbed needle which passes downward through the cloth to grab the thread and pull it up to form a loop to be locked by the next loop. The first American lockstitch sewing machine was invented by Walter Hunt in 1832.[7] His machine used a needle with the eye and the point on the same end carrying the upper thread, and a falling shuttle carrying the lower thread. The curved needle moved through the fabric horizontally, leaving the loop as it withdrew. The shuttle passed through the loop, interlocking the thread. The feed was unreliable, requiring the machine to be stopped frequently and reset up. Hunt eventually lost interest in his machine and sold individual machines without bothering to patent his invention, and only patenting it at a late date of 1854. In 1842, John Greenough patented the first sewing machine in the United States. The British partners Newton and Archibold introduced the eye-pointed needle and the use of two pressing surfaces to keep the pieces of fabric in position, in 1841.[8]

The first machine to combine all the disparate elements of the previous half-century of innovation into the modern sewing machine was the device built by English inventor John Fisher in 1844, a little earlier than the very similar machines built by Isaac Merritt Singer in 1851, and the lesser known Elias Howe, in 1845. However, due to the botched filing of Fisher's patent at the Patent Office, he did not receive due recognition for the modern sewing machine in the legal disputations of priority with Singer, and Singer reaped the benefits of the patent.

I love this moment frozen in time, and love the background and light! Beautiful work!