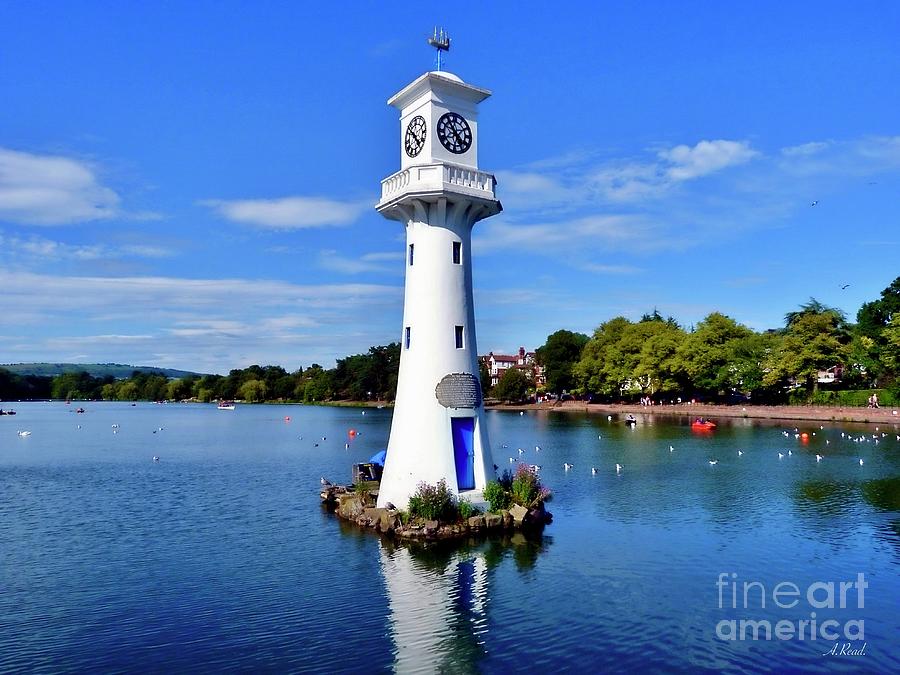 The wooden figurehead from Scott's ship, the Terra Nova, was presented to the City of Cardiff by the ship owner Mr. F.C. Bowring of Liverpool at a ceremony which took place at the southern end of Roath Park Lake on December 8th 1913. The figurehead is further described in the Promenade section of this website. During his presentation speech Mr Bowring announced that he would donate a clock tower as a permanent memorial to Scott and the British Antartic Expedition (1910). It was decided to erect this in the form of a lighthouse in Roath Park Lake, about 25 feet from the Promenade, and roughly opposite the site of the Terra Nova figurehead. John Smith Clockmakers of Derby produced a clock for the tower, the design of which was agreed by the City's Parks and Open Spaces Committee in March 1914.

The lake was emptied in 1914 in order to build foundations for the tower. A photograph of the tower, which was said to be "rapidly nearing completion", appeared in a report of a YMCA carnival at the lake in July 1914. The work was completed in early 1915 at a total cost of £159 but it was not until October 14th 1918 that the clock tower was officially presented to the City by Mr. Bowring.

There is a plaque on the side of the Memorial facing the Promenade, which states that it is dedicated to the memory of Captain Scott and the members of the crew of S.S Terra Nova who sailed from Cardiff in 1910 and died in the Antarctic in 1912. The plaque reads:-


To the memory of
Captain R. F. Scott C.V.O. D.S.O. , R.N.
and his faithful companions
Captain L. E. G. Oates, Lieut. H. R. Bowers R.I.M.,
Dr. E. A. Wilson and Petty Officer Edgar Evans R.N.
who sailed in the S,S. Terra Nova from the Port of Cardiff
June 15th 1910, to locate the South Pole; and, in pursuit of
that great and successful scientific task, laid down their
lives in the Antarctic Regions. March 1912.
"Britons all, and very galant gentlemen".
Erected and presented to the City of Cardiff by
F. C. Bowring Esq., J.P.
1915.

Congratulations, your beautiful artistic work is Featured on the home page of the "Bedroom Art Gallery" group. 12/5/20

Wow, they emptied the lake to build the foundation for this clock tower lighthouse! Beautiful capture, Andrew and awesome history on this pretty clock tower. L/F

Thanks so much Deborah, yes I didn't realise the history of it until recently and I've been here many a time.