The Railroad Junction - Circa 1880 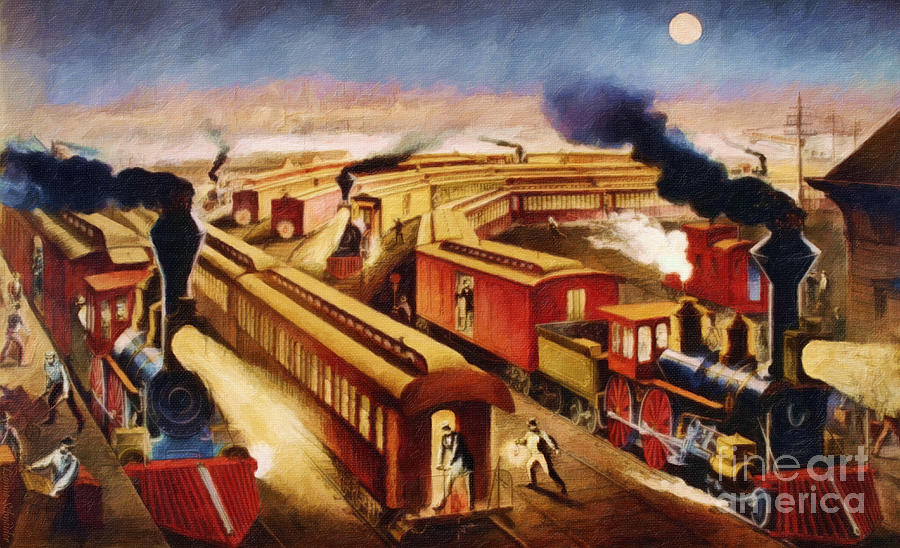 The Railroad Junction - Circa 1880

Digitally hand painted based on an original lithograph of a railroad junction by Currier and Ives. I chose to paint this in more vibrant colors than the 125 year old print indicates and to alter some of the background detail. Online versions of this and other Currier and Ives prints are generally too small to reproduce but can serve as adequate reference images. Currier and Ives images are in the public domain.

From Wikipedia:
Currier and Ives was a successful American printmaking firm headed by Nathaniel Currier (1813-1888) and James Merritt Ives (1824-1895). Based in New York City from 1834-1907, the prolific firm produced prints from paintings by fine artists as black and white lithographs that were hand colored. Lithographic prints could be reproduced quickly and purchased inexpensively, and the firm called itself "the Grand Central Depot for Cheap and Popular Prints" and advertised its lithographs as "colored engravings for the people."
The name Currier & Ives first appeared in 1857, when Currier invited James Merritt Ives (1824-95), his company's bookkeeper and accountant, to become his partner. The two were very distantly connected by marriage. Nathaniel Currier soon noticed Ives's dedication to his business and his artistic knowledge and insight into what the public wanted. The younger man quickly became the general manager and also helped Currier interview potential artists and craftsmen. The younger man had a flair for gauging popular interests and aided in selecting the images the firm would publish and expanding the firm's range to include political satire, and sentimental scenes such as sleigh rides in the country and steamboat races. In 1857, Currier made Ives a full partner.
The firm Currier and Ives described itself as "Publishers of Cheap and Popular Prints". At least 7,500 lithographs were published in the firm's 72 years of operation. Artists produced two to three new images every week for 64 years (1834-1895), producing more than a million prints by hand-colored lithography. For the original drawings, Currier & Ives employed or used the work of many celebrated artists of the day including J.F. Butterworth, George Inness, Thomas Nast, C.H. Moore, and Eastman Johnson. The stars of the firm were Arthur Fitzwilliam Tait, who specialized in sporting scenes; Louis Maurer, who executed genre scenes; George H. Durrie, who supplied winter scenes; and Fanny Palmer, who liked to do picturesque panoramas of the American landscape, and who was the first woman in the United States to make her living as a full-time artist. All lithographs were produced on lithographic limestone printing plates on which the drawing was done by hand. A stone often took over a week to prepare for printing. Each print was pulled by hand. Prints were hand-colored by a dozen or more women, often immigrants from Germany with an art background, who worked in assembly-line fashion, one color to a worker, and who were paid $6 for every 100 colored prints. The favored colors were clear and simple, and the drawing was bold and direct.
The earliest lithographs were printed in black and then colored by hand. As new techniques were developed, publishers began to produce full-color lithographs that gradually developed softer, more painterly effects. Skilled artist lithographers like John Cameron, Fanny Palmer and others represented in the show became known for their work and signed important pieces. Artists like A. F. Tait became famous when their paintings were reproduced as lithographs.
Currier and Ives was the most prolific and successful company of lithographers in the U.S. Its lithographs represented every phase of American life, and included the themes of hunting, fishing, whaling, city life, rural scenes, historical scenes, clipper ships, yachts, steamships, the Mississippi River, Hudson River scenes, railroads, politics, comedy, gold mining, winter scenes, commentary on life, portraits, and still lifes.

From The Legal Genealogist website:
Between the founding of the firm and its dissolution in 1907, Currier & Ives produced more than 7,500 different lithographs that sold more than a million copies.
Persistently used for greeting cards and more, avidly sought after by collectors, Currier & Ives lithographs are among the truly iconic images of an America gone by.
And more than 1,600 of those images are available online, free for the taking, at the website of the Library of Congress. Remember the law here: anything published in the United States before 1923 is now out of copyright. It can be used, reused, modified and republished, because it's now in the public domain. All Currier & Ives lithographs were published before 1923. So they are all out of copyright, all in the public domain.

Thank you to each of these groups who have featured this image:
A Little of This A Little of That
Harmony and Happiness
Digital Realism
Todays Best Art
Rock the Sales (my apologies to Joetta for spelling it Sails in my comment!)
Art From the Past
Collectors Treasures
Digital Art and Fabulous Fractals
Visual Voice
Excellent Self Taught Artists
Raised Country Raised Right
Art With Flair
Signature Style Art
M O U S E
3 a Day Greeting Cards
Comfortable Art
Daily Dose of Wisdom
FAA Featured Images
Artists News
Photography and Artwork - Beauty USA
Digital Art and Resources
Antiques and Vintage

As noted above, work in the public domain may be reproduced, modified, adapted, used in part or in whole for both commercial and personal use.

Image Copyright � Lianne Schneider http://lianne-schneider.artistwebsites.com All rights reserved.
All images and my personal poetry/prose are protected by copyright and may not be reproduced, downloaded, distributed, transmitted, copied, reproduced in derivative works, displayed, published or broadcast by any means or in any form without prior written consent from the artist. Copyright on works derived from or based on images in the public domain applies only to the subsequent manipulation or painting resulting from my changes. The original image remains in the public domain and such images are used in accordance with international copyright laws.

Like the subtle style and your personal interpretation...excellent body of work!

Thank you so much to everyone who has come by to leave a comment or a vote on this image - each word is one I cherish and I hope that I have repaid your kindness by a visit to your work as well. If I haven't, I certainly intend to soon. And a special thank you to Mechala for featuring this image in ANTIQUES AND VINTAGE. I'm so very honored and grateful.

Beautiful! This to me has a lovely art deco feel to it. The colors are vibrant and there is so much to look at! like

What a great picture, what a fine interpretation! You remain, Lianne, a superb interpreter of the magnificence and romance of Old America... vf

Superb!! Love the colors and all the activity going on here!!

What a great cubist-like painting, Lianne! Just love these color and the movement! LLLLLLL/F

Thanks so very much Greta - so happy you like it!!! Means a lot to me.

Another vote. Love this!

Excellent work. Great use of light and color. v

I love this one Lianne.

Wonderful Lianne. It reminds me of a futuristic art and yet it is 125 years old with the roaring steam engine! Love your colors!! l/fav

I am beyond ashamed that I am almost a month behind in thank yous and visits relating to this image. So let me first tell you each how totally grateful I am that each of you took the time to come by and to leave a note of encouragement and support. That means just the world to me. So I'm starting here - with you - to repay your precious gift in kind by visiting your work too. Expect me within the next few days! Thank you so much.

What a beautiful presentation and congrats for being selected on the feature pages!! v/f/t

Beautiful painting, love all the trains...

Wonderful painting and creative story! My compliments! My best regards from Romania! v

Wonderful painting! sure tells a story!

Love the color and composition

A very beautiful and exquisite work, Lianne!!! Love so much how you created it...LF! Merry Christmas! :)

Great work on this image! v

This Is Awesome And I Love The Color.. FV

A gorgeous colorful and eye-catching scene Lianne! We added our Like! Celebrate life, Debra and Dave

Fabulous work, Lianne! There's a lot of movement in it, so many things happening! Very well done! V.