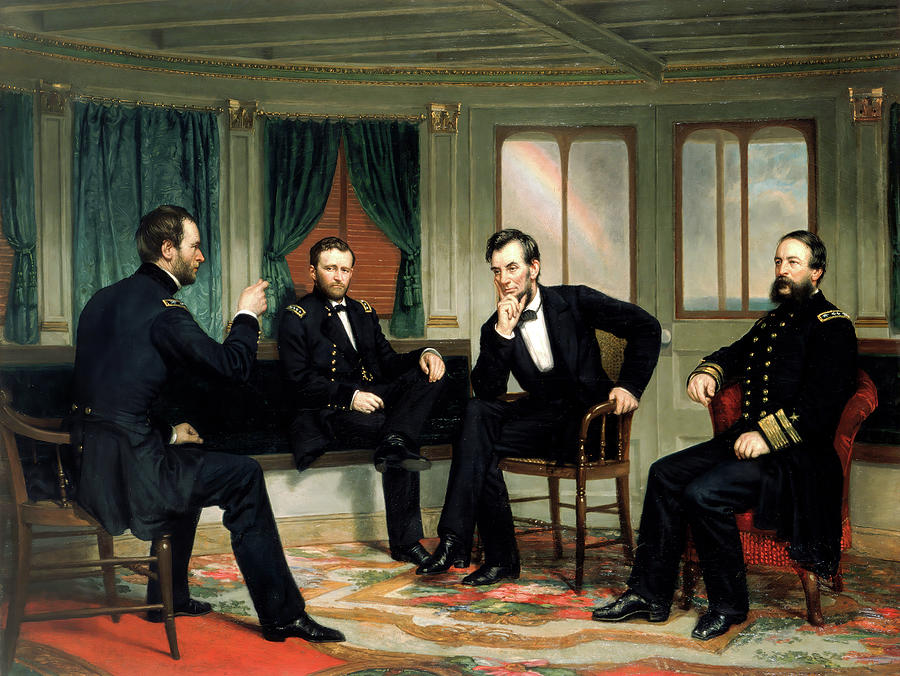 The title is the only clue to the import of this solemn painting, a prelude to the end of the Civil War. Seated in the after cabin of the Union steamer River Queen are Maj. Gen. William T. Sherman, Lt. Gen. Ulysses S. Grant, President Abraham Lincoln, and Rear Adm. David D. Porter. Less than a week before the fall of Petersburg, Virginia, the four men met to discuss the nature of the peace terms to follow.

The events leading up to the scene recorded in The Peacemakers are these. Following his march through Georgia, Sherman with his army had turned to the Carolinas and, on March 19, 1865, had taken Goldsboro, North Carolina. Petersburg, the last defense of Richmond, where Gen. Robert E. Lee had gathered his forces, had been under siege by Grant's army for nine months. The end of the Civil War was at last imaginable.

On March 20 Grant invited Lincoln to visit him at his headquarters at City Point, on the James River near Richmond: "Can you not visit City Point for a day or two? I would like very much to see you and I think the rest would do you good."' Lincoln accepted this opportunity to relax while acquainting himself firsthand with the progress of the war. On March 24 he reached City Point on the River Queen. Sherman, according to his Memoirs, decided coincidentally to pay a visit to Grant at just this time, arriving on the evening of the 27th: "After I had been with him an hour or so, [Grant] remarked that the President [was on the River Queen]. . . and he proposed that we should call and see him."

Since Porter, in charge of the Union fleet on the James River, was also in City Point, he joined the others. On March 27 and again on the 28th, the four gathered aboard the steamer. The first meeting was, according to Sherman, "a good, long, social visit." During the second meeting their conversation, although wide-ranging, turned often to the conclusion of the peace. Only Sherman and Porter left written accounts, and some have suggested that they exaggerated Lincoln's desire for peace, as Porter put it, "on almost any terms" in order to justify Sherman's later, controversial liberal surrender terms to Gen. Joseph Johnston. But Lincoln's generous intentions had been memorably formulated in his Second Inaugural Address, just three weeks before: "With malice toward none; with charity for all."

Following the meeting shown in The Peacemakers and preceding the end of the war by one week, Petersburg fell on the night of April 2 after the long siege. Grant and Lincoln entered the city the next day. On his return to the Union base at City Point, Lincoln told Porter: "Thank God I have lived to see this. It seems to me that I have been dreaming a horrid dream for four years, and now the nightmare is gone. I want to see Richmond." Together they sailed upriver to the defenseless capital of the Confederacy. There Lincoln, less than a fortnight before his assassination, walked the streets amid a swelling throng of emancipated black people.

The Peacemakers documents in measured accents this turning point of American history. Its somber figures–less actors than audience–await the denouement, the Confederate surrender at Appomattox Court House, Virginia.

Such art is inspiring! vlf