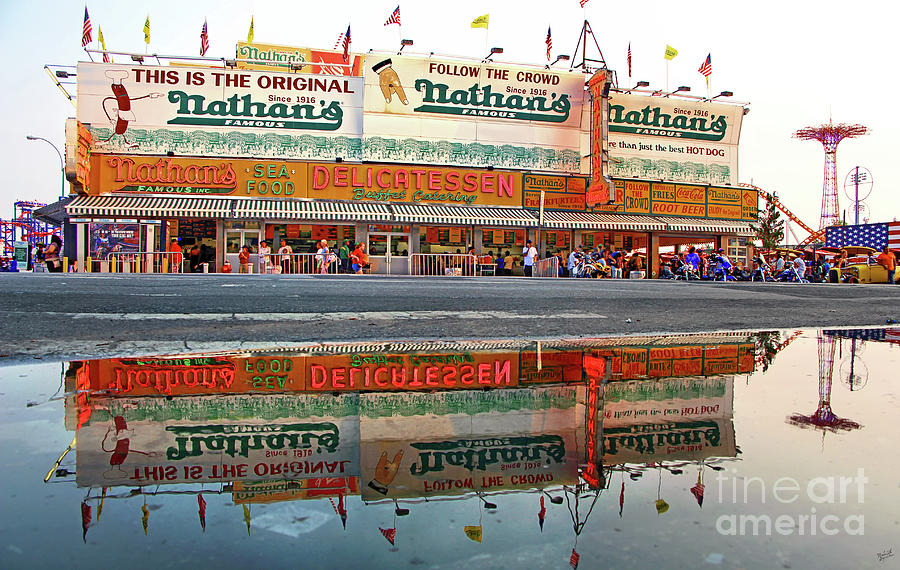 Nathan's began as a nickel hot dog stand in Coney Island in 1916. This photo shows the original Nathan's which is still located on the same site where it all started. This fast food store is an iconic landmark in the historic Coney Island neighborhood of Brooklyn, New York, USA. In addition to the Original Nathan's hot dog restaurant, Coney Island is also known for it's beach, boardwalk, Luna Park amusement park and "The Cyclone", one of the oldest wooden roller coasters in America. The Nathan's Hot Dog Eating Contest where contestants try to consume as many hot dogs as possible in a ten minute time period is held every year on July 4th to celebrate the American Independence Day. It has been held at the original Nathan's location on Coney Island, Brooklyn since the early 1970s. Also visible in this photo towards the far right is the Parachute Jump, another Brooklyn landmark. The Parachute Jump was originally created in 1939 for the World's Fair that was held in New York City, but was later moved to Coney Island and has been a fixture on the boardwalk ever since. It is sometimes referred to as the Eiffel Tower of Brooklyn.

Congrats on your Sale!

Thank you for the feature, John!

Such a clear and well accomplished image, Nishanth. I am impressed with your expertise. Another fave. LF