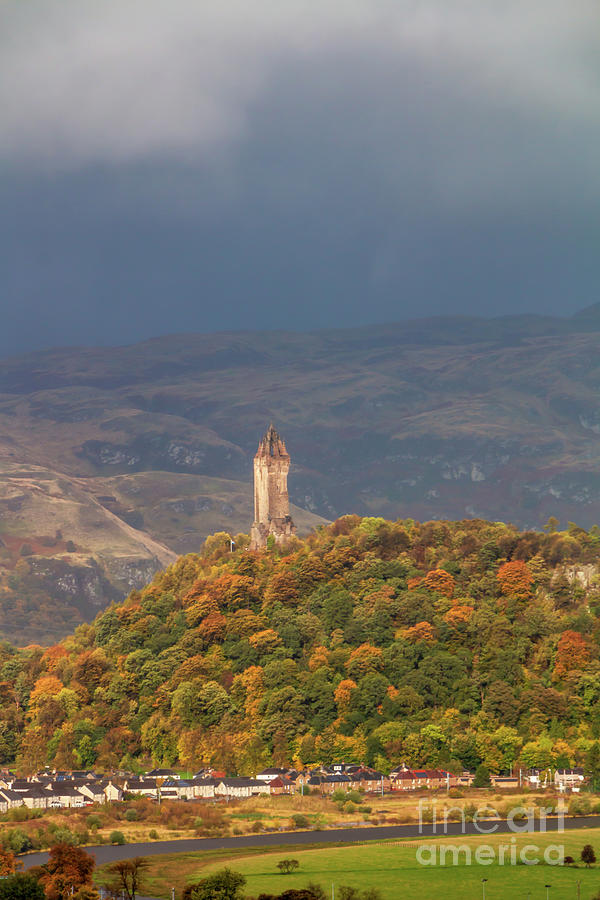 Alas, this is as close as I could get to the National Wallace Monument in Stirling Scotland, But it is a grand image of such an important figure of Scotland's history. Sir William Wallace, otherwise known as Braveheart, was a Scottish knight who became one of the main leaders during the First War of Scottish Independence. Along with Andrew Moray, Wallace defeated an English army at the Battle of Stirling Bridge in September 1297. He was appointed Guardian of Scotland and served until his defeat at the Battle of Falkirk in July 1298. In August 1305, Wallace was captured in Robroyston, near Glasgow, and handed over to King Edward I of England, who had him hanged, drawn, and quartered for high treason and crimes against English civilians. William was born in approximately 1270, near Paisley, Renfrew, Scotland.
"In 1296, England’s King Edward I forced Scottish king John de Balliol, already known as a weak king, to abdicate the throne, jailed him, and declared himself ruler of Scotland. Resistance to Edward’s actions had already begun when, in May 1297, Wallace and some 30 other men burned the Scottish town of Lanark and killed its English sheriff. Wallace then organized a local army and attacked the English strongholds between the Forth and Tay rivers. On September 11, 1297, an English army confronted Wallace and his men at the Forth River near Stirling. Wallace’s forces were vastly outnumbered, but the English had to cross a narrow bridge over the Forth before they could reach Wallace and his growing army. With strategic positioning on their side, Wallace’s forces massacred the English as they crossed the river, and Wallace gained an unlikely and crushing victory.

He went on to capture Stirling Castle, and Scotland was briefly nearly free of occupying English forces. In October, Wallace invaded northern England and ravaged Northumberland and Cumberland counties, but his unconventionally brutal battle tactics (he reportedly flayed a dead English soldier and kept his skin as a trophy) only served to antagonize the English even more.

When Wallace returned to Scotland in December 1297, he was knighted and proclaimed guardian of the kingdom, ruling in the deposed king’s name. But three months later, Edward returned to England, and four months after that, in July, he invaded Scotland again.

On July 22, Wallace's troops suffered defeat in the Battle of Falkirk, and as quickly as that, his military reputation was ruined and he resigned his guardianship. Wallace next served as a diplomat and in 1299 attempted to garner French support for Scotland’s rebellion. He was briefly successful, but the French eventually turned against the Scots, and Scottish leaders capitulated to the English and recognized Edward as their king in 1304. Unwilling to compromise, William Wallace refused to submit to English rule, and Edward’s men pursued him until August 5, 1305, when they captured and arrested him near Glasgow. He was taken to London and condemned as a traitor to the king and was hanged, disemboweled, beheaded and quartered. He was seen by the Scots as a martyr and as a symbol of the struggle for independence, and his efforts continued after his death. Scotland gained its independence some 23 years after William Wallace’s execution, with the Treaty of Edinburgh in 1328, and Wallace has since been remembered as one of Scotland’s greatest heroes." (https://www.biography.com/people/william-wallace-9522479)

I love visiting places such as Scotland because of their rich history. Learning about a culture and their history is such a passion of mine. I officially have the travel bug and want to visit more far away places to learn other country's histories. But first, I think I must travel back to Scotland for there is so much more to see and to learn!