The Missouri River At Sunset South Of Culbertson Mt 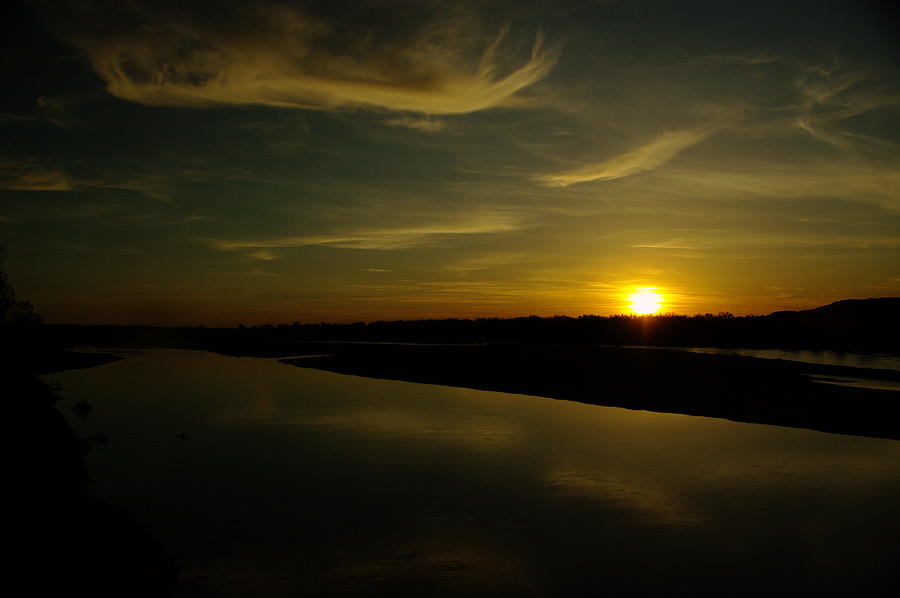 The Missouri River At Sunset South Of Culbertson Mt

The Missouri River is the longest river in North America,[11] longest tributary in the United States and a major waterway of the central United States. Rising in the Rocky Mountains of western Montana, the Missouri flows east and south for 2,341 miles (3,767 km)[7] before entering the Mississippi River north of St. Louis, Missouri. The river takes drainage from a sparsely populated, semi-arid watershed of more than half a million square miles (1,300,000 km2), which includes parts of ten U.S. states and two Canadian provinces. When combined with the lower Mississippi River, it forms the world's third longest river system.

For over 12,000 years, people have depended on the Missouri and its tributaries as a source of sustenance and transportation. More than ten major groups of Native Americans populated the watershed, most leading a nomadic lifestyle and dependent on enormous buffalo herds that once roamed through the Great Plains. The first Europeans encountered the river in the late seventeenth century, and the region passed through Spanish and French hands before finally becoming part of the United States through the Louisiana Purchase. The Missouri was long believed to be part of the Northwest Passage � a water route from the Atlantic to the Pacific � but when Lewis and Clark became the first to travel the river's entire length, they confirmed the mythical pathway to be no more than a legend.

The Missouri was one of the main routes for the westward expansion of the United States during the 19th century. The growth of the fur trade in the early 1800s laid much of the groundwork as trappers explored the region and blazed trails. Pioneers headed west en masse beginning in the 1830s, first by covered wagon, then by the growing numbers of steamboats entering service on the river. Former Native American lands in the watershed were taken over by settlers, leading to some of the most longstanding and violent wars against indigenous peoples in American history.

During the 20th century, the Missouri River basin was extensively developed for irrigation, flood control and the generation of hydroelectric power. Fifteen dams impound the main stem of the river, with hundreds more on tributaries. Meanders have been cut and the river channelized to improve navigation, reducing its length by almost 200 miles (320 km) from pre-development times. Although the lower Missouri valley is now a populous and highly productive agricultural and industrial region, heavy development has taken its toll on wildlife and fish populations as well as water quality.

Jeff, the light is perfect and I love the diagonal lines that lead the eye.

Oooooh, Jeff, I love this.....The colors are gorgeous...and i love the reflections on the water....

Fantastic sunset, Jeff. I love the light on the clouds.