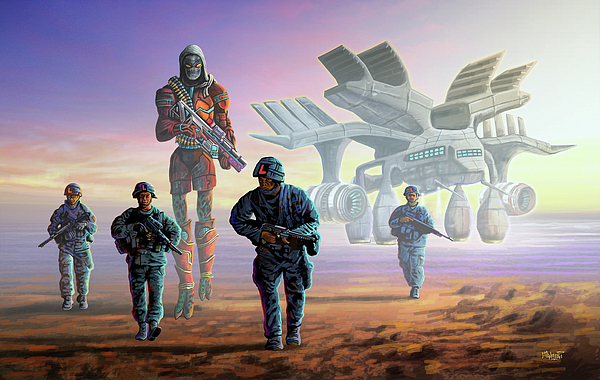 If it was not for my father’s stories about the colonial times in Kenya, I would not have thought of doing this painting. He was always saying how he hated the loyalists during that time. While they were fighting in the forest against the colonialists, some of the community members had become loyalists to the colonial government.

These guys were everywhere, and they were well armed. They made it very difficult for the freedom fighters in Kenya. Later when the invaders went, the loyalists were scared to death. The time of reckoning had eventually come! They thought it would always be the same. They thought they would oppress their brothers forever. Anyhow, times change.

Strangely, they were saved by the new leader and founding father of Kenya Mzee Jomo Kenyatta who said Kenyans were to stop fighting and concentrate on healing. No one was to lift arms against his brother or Fellow Kenyans anymore. The new economy needed all Kenyans and there was too much blood poured already. In fact, others were already intermarried with the loyalists’ families!

I was not born when these things happened, so I can’t be an honest judge of others. My dad was, and still is, very clear about it since he was a young man then.

I have heard some people of my generation go on and on about those loyalists. Sometimes you would think they were there and actually saw everything.

I ask today. We of this generation, If we were to be invaded by Aliens (Don’t really believe in Aliens myself) what would you do? Would you join the ranks to fight off the invaders or would you become a loyalist? This question we can only answer if we got invaded.

Next time you throw a stone at the loyalists who joined ranks with the invaders in your country, ask yourself. What would you have done if you were alive during the war period? Would you have been a freedom fighter or a loyalist? I know my answer. Let’s wait and see. Let’s hope not. Never!

You are an amazing talented artist

Thanks Tom. I appreciate

Nice art work ,Anthony. I love the mystery of this piece . Congrats on the feature too. Susan Brown

Thank you Susan. I appreciate very much

Congrats. you are featured in Digital works...

Thanks Iris. I appreciate the feature

This beautiful and mysterious work seems to reveal otherdimensional presences that influence warfare, Anthony, and who is to say they aren't really there?

Thanks Joe. Who really knows which form the aliens will take in the future. Who knows if someone out there is coming to deliver a reckoning?

Wow!!! This is amazing Anthony.L/F

Thank you very much Deepa

What a powerful and informative description, so creatively illustrated and presented!! LF