The Love Boat In Vancouver Bw 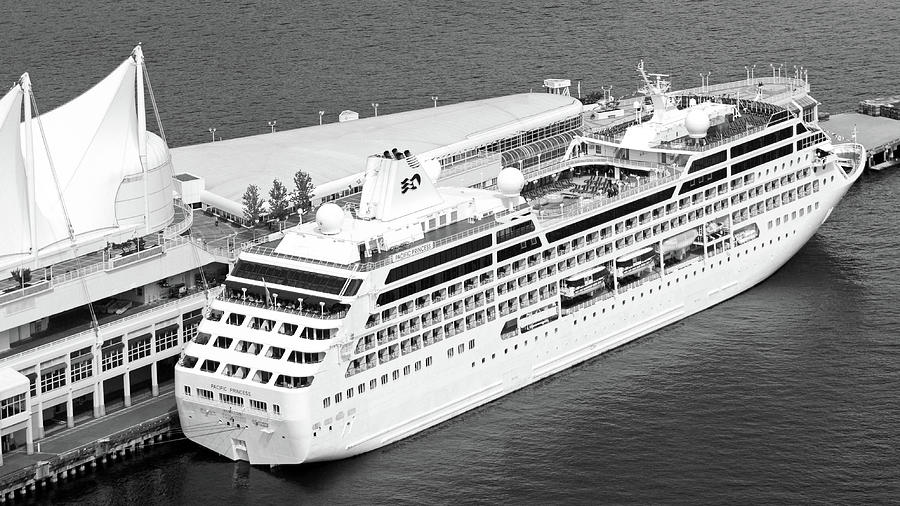 The Love Boat In Vancouver Bw

The Pacific Princess, “The Love Boat” of television fame, is featured in vivid black-and-white, docked at Canada Place on the Burrard Inlet waterfront of Vancouver, British Columbia.

This busy port is home to the Vancouver Convention Centre, Pan Pacific Vancouver Hotel, Vancouver's World Trade Centre, and the virtual flight ride FlyOver Canada. The building's exterior is covered by fabric roofs resembling sails. It is also the main cruise ship terminal for the region, where most of Vancouver's cruises to Alaska originate. The building was designed by architects Zeidler Roberts Partnership in joint venture with Musson Cattell Mackey Partnership and DA Architects + Planners.

The white sails of the building have made it a prominent landmark for the city, and draw comparisons to the Sydney Opera House in Sydney, Australia, and the Denver International Airport in Denver, Colorado. Cruise ships docked here included the Disney Wonder and Pacific Princess, the smallest ship in the Princess line, but perfect for getting close to the glaciers in Alaska’s Glacier Bay National Park.

The structure was expanded in 2001 to accommodate another cruise ship berth. In 2009/10, for the 2010 Winter Olympics, Canada Place served as the Main Press Centre.

Popular and known as a little globe-trotter, the Pacific Princess was retired by the Princess Cruiseline in January 2021. Hopefully she will not end up in a scrapyard, for this is a gem of a ship, beautifully appointed.

Copyright 2015-21 Connie Steitz Fox
All rights reserved
Please note: The watermark will not appear on your purchased artwork.

The Love Boat in Vancouver BW
Fine Art Photography by Connie Fox
Original color photo captured in September 2015, converted to vivid black-and-white, and cropped to the equivalent of 16x9; no sky and no people.

FEATURED on the homepages of The Red Maple Gallery and Just Perfect, October 2021.

Thank you, Janis, for featuring this image in Just Perfect!

Thank you, Maria, for the feature!