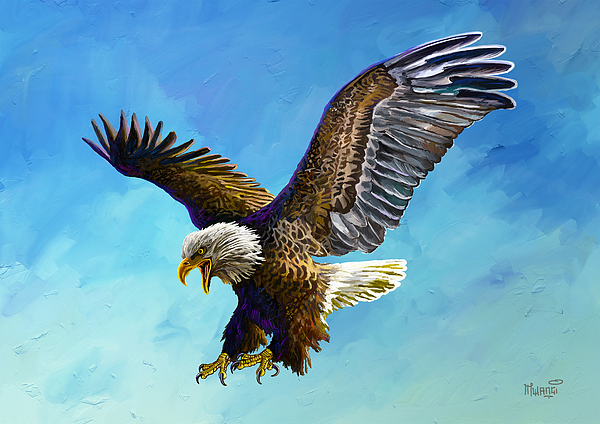 Just Google the word eagle today. You will find that the first 20 or so images that come up are those of the BALD EAGLE. The internet thinks Eagle means "Bald Eagle"! Amazing as it may seem, this guy is famous. As the symbol of the USA (and I am not saying this to seem in favor of the USA) no one would expect anything less.

Long before it was the symbol of United States, this great raptor hunted the wild. It is a formidable force in the wild. No wonder when America was born, this very amazing candidate and not the Bison got the honor.

The Bald Eagle has been the national emblem of the United States since 1782 and a spiritual symbol for native people for far longer than that. These regal birds aren't really bald, but their white-feathered heads gleam in contrast to their chocolate-brown body and wings.

One thing that will always remain a mystery to me is whether the Eagle made the States Great or the States made the Eagle great. That is definitely food for thought.

At one time the Bald Eagle was endangered by hunting and pesticides. Today, Bald Eagles have flourished under protection.

The bald eagle is the only eagle unique to North America. Its distinctive brown body and white head and tail make it easy to identify even from a distance.

Although most of the Eagles in my gallery are generally from Africa, I had to add this guy. At least even for the fact that I also display my work on FAA.

I give this eagle the title Grand Master because the bald eagle is the most famous of all the eagles! He is not a chess player!

Great Work! Congratulations on the Sale!

Congratulations on your feature! Beautiful!

Thanks Cindy. I appreciate

Congratulations Anthony, your work is Featured in "A Birding Group - Wings"! I invite you to place it in the group's "2017 Featured Image Archive" Discussion!! L/Tweet

Another beauty! I love the contrasting colors, use of purple for shading.

Congratulations! Your work is featured on the Homepage of Fine Art America Group "All Natural Beauty Of This World" ..Beth. You are invited to add your artwork to the group’s "Featured Image Discussion Thread as a permanent archive.

Thanks Beth for the feature

Striking masterpiece Anthony! Fabulous depth and colour values in the dark shadows! The bald eagle is a common sight in my region, always a beautiful sight. L/F