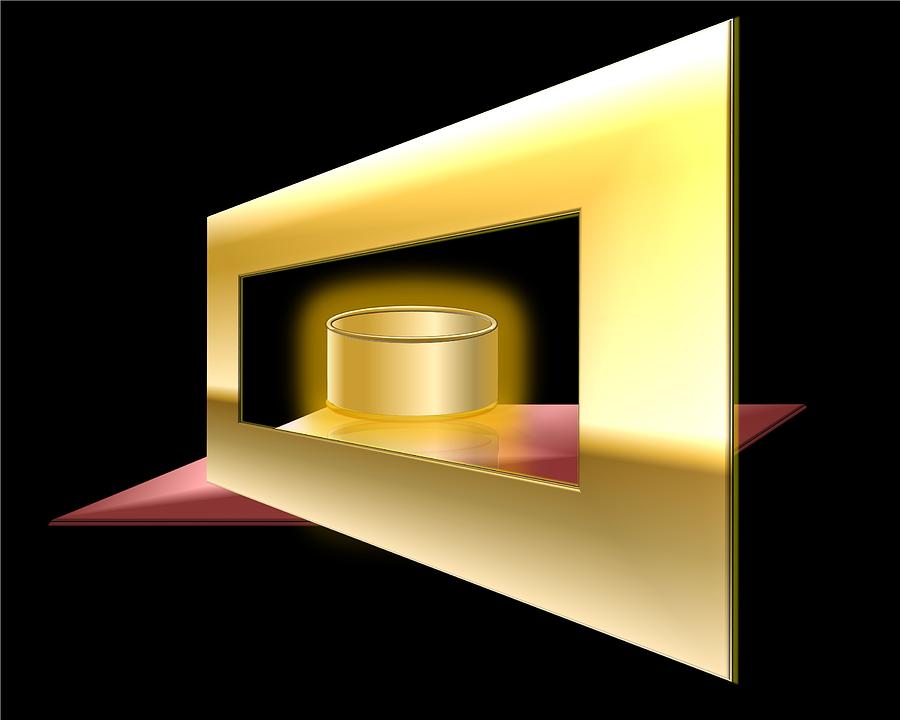 This is an abstract digital art created by Cyril Maza. Basically, it shows a golden can and a golden frame glowing in the dark.
.....
According to Wikipedia, "Gold is a dense, soft, shiny, malleable, and ductile metal. It is a chemical element with the symbol Au and atomic number 79.
.....
It has a bright yellow color and luster traditionally considered attractive, which it maintains without oxidizing in air or water. Chemically, gold is a transition metal and a group 11 element. It is one of the least reactive chemical elements, solid under standard conditions. The metal therefore occurs often in free elemental (native) form, as nuggets or grains in rocks, in veins and in alluvial deposits. Less commonly, it occurs in minerals as gold compounds, usually with tellurium.
.....
Gold resists attacks by individual acids, but it can be dissolved by the aqua regia (nitro-hydrochloric acid), so named because it dissolves gold. Gold also dissolves in alkaline solutions of cyanide, which have been used in mining. It dissolves in mercury, forming amalgam alloys; is insoluble in nitric acid, which dissolves silver and base metals, a property that has long been used to confirm the presence of gold in items, giving rise to the term acid test.
.....
This metal has been a valuable and highly sought-after precious metal for coinage, jewelry, and other arts since long before the beginning of recorded history. Gold standards have sometimes been monetary policies, but were widely supplanted by fiat currency starting in the 1930s. The last gold certificate and gold coin currencies were issued in the U.S. in 1932. In Europe, most countries left the gold standard with the start of World War I in 1914 and, with huge war debts, did not return to gold as a medium of exchange."
.....
This art work has been featured in the following groups:
1.) Digital Veil: May 2013
2.) Math Art: May 2013
3.) Digital Touch: May 2013
4.) Surreal Dreams of Contemporary Artists - 2013: May 2013
5.) Asian Artists: May 10, 2013
6.) Your Best Work: May 11, 2013
7.) Artists News: May 27, 2013

The shaded frame and the intersecting plane are most effective against the dark background, Cyril - liked!

Stunning work with great dimensions and appeal. Revisited and Fav

Another great design work! Another vote!

This really shows off your engineering mind, Cyril - love the composition, angles and perspective! L/F

Thanks for the feedback, Barbara.

Abstract, geometric, and just plain COOL!! I like your work. +1vote

Thanks for the feedback, Jim.

Voted. Cyril I love your sharp clean lines in this creation! The shading you did adds a lot of interest to the image along with shape and depth of field.. Very well done!

Thank you, Linda, for your very helpful and encouraging feedback. I really appreciate it.

Like how you worked this piece, well done;) v

Thanks, David and Carol.

This art work just got featured in the group called "Your Best Work". Thank you so much for your support. It's very much appreciated.

Thanks, for coming back, Melissa.