The Ghost Of The Pirate House 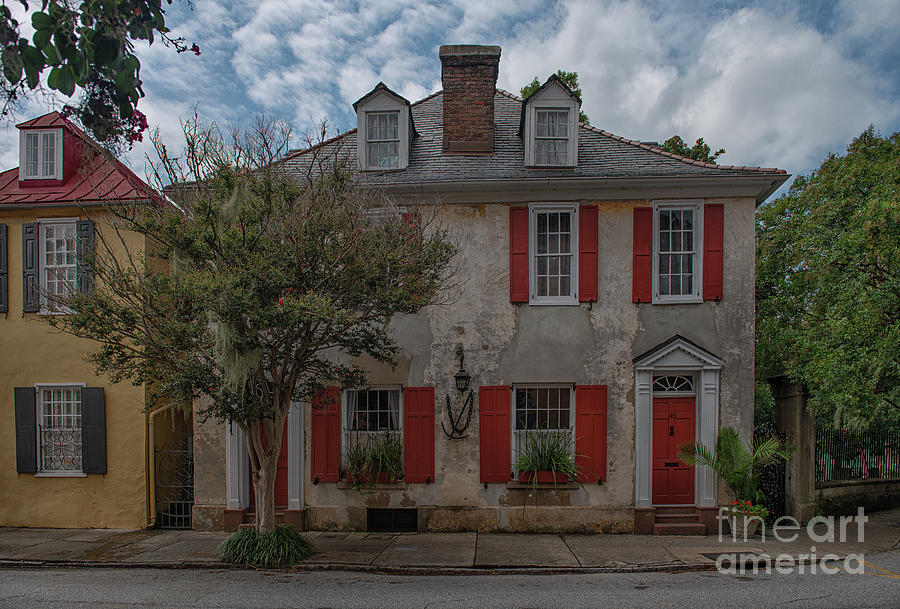 The Ghost Of The Pirate House

143-145 Church Street with its hipped roof, dormers and red shutters is a familiar site to Charlestonians. The structure was originally built with brick and Bermuda stone as a double tenement around 1740 by Alexander Peronneau, a wealthy French Huguenot. The double tenement was renovated and converted into a single-family residence in 1928, at which time the buildings in the back were constructed with brick recycled from Shepheard's Tavern, which had been torn down in 1924.

For anyone who loves pirate history, they know that there is quite a bit of it in Charleston, South Carolina. In fact, pirates pretty much ran this city when they landed here. Being a popular port city, Charleston saw it all. The pirates weren’t always bad, but they did bring some bad energy along with them. One of the popular hangouts for these pirates was the Pirate House. It is located at 143 to 145 Church Street. The history of this area runs rich and the stories of hauntings do as well.

The History of the Pirate House

The building that is known as the Pirate House was built with brick and Bermuda stone in 1740. The man who built it was a wealthy Frenchman named Alexander Peronneau. It was eventually renovated in 1928 and became a home for a single-family. As far as the locals are concerned, this building has always been called the Pirate House and most of them still call it that today. Ironically enough, there is no documentation that claims real pirates lived or visited here.

The legends of pirates exist all over Charleston and most of them are all connected with this building. Pirates like Blackbeard and Stede Bonnet were very active in Charleston and even had hostages here. Many pirates were not active until after the building was deemed the Pirate House, but there are signs in the area that say “Pirates Courtyard.” Right across from this courtyard, visitors will find, attraction #3 of Charleston’s most haunted places, St. Phillips Episcopal Church.

By looking at the Pirate House today, no one would ever suspect that some of the most notorious pirates once hung out here. The house now has three stories and a nice courtyard in the back. It is located in a neighborhood of row houses and no one would ever think that debauchery happened here. Oh, but it did…

For those who have visited the Pirate House or worked in it, there are some ghostly tales of what they have seen and heard. Ghost tours are given here often and you never know who or what you will see when you walk through the doors.

One of the worst pirates to ever visit Charleston was Stede Bonnet. He was born in 1688 in Barbados. He was intelligent and privileged as a child and young man. He didn’t want to work the way his father did, he took interest in piracy early on. He did get married though and took over his father’s sugarcane farm. He made a fortune doing this. In 1717, his life changed and for some unknown reason, he decided to become a pirate. Many of the family friends thought he had gone insane, whereas others thought he just wanted to leave his demanding wife. No matter what the reasons were, he decided that a life of piracy was his new calling.

He bought a ship and named it The Revenge. He paid a large crew and left for a life of piracy. Interestingly enough, he didn’t know how to sail a ship. The crew was not happy with this lifestyle so many of them were planning a mutiny. They did have success in plundering some ships, but the crew still did not seem happy. This is when Bonnet decided to take the ship to Charleston. Bonnet met Blackbeard then. He was a real pirate. He was dirty and evil and knew how rob ships. This is something that Bonnet could use help with.

Blackbeard came aboard The Revenge and knew immediately that Bonnet was no pirate. Blackbeard was now in charge and so was his crew, Bonnet could wander about his own ship still and he enjoyed the fact that someone else was in charge. It took the pressure off of him.

When they made it to Charleston, they blocked ships from coming in or going out. They took hostages and took everything they could off the ships. Blackbeard actually ended up double crossing Bonnet and he left him in Charleston. Because of his behavior as a pirate, Bonnet was hanged from the gallows and there he died.

The Ghosts of the Pirate House

The Pirate House was known as a place for gambling, drinking, and overall debauchery. Trades went on between pirates that were against the law and many of the stolen goods off of other ships were sold here at discounted rates. This was how the pirates of Charleston made a living. They would then go spend it on booze and prostitutes. There are stories that say that the basement of the Pirate House is a place where Blackbeard’s treasure was buried and still may be buried to this day. Is that why the ghosts of pirates are wandering about?

What really happened in the Pirate House back then? Were there treasures? Were there murders and death? We do know that there was a bar in the building where pirates would drink until they passed out. This could be one of the causes of death for those who had a few too many during their time at the Pirate House. There were illnesses and sexual transmitted diseases that were passed around at this time too. These could also be a cause for many deaths here. There have also been tales of floods that happened in this area and many pirates got trapped and drowned in the alleyways and on the streets. No matter what tragedies have happened here, there are tales of ghosts of the pirates who still may be looking for that treasure or perhaps just wandering the streets where they took their last breaths.

One of the ghost stories that happened here was during a dark and stormy night. A tour group was walking along one of the alleys that runs along the Pirate House. One of the tour members stopped and had this look of shock and fear on their face. Another of the group members asked what was wrong and the scared member couldn’t speak. It was as if they were in a trance. Shortly after, they shook themselves out of this trance. When they were asked by the others what happened. They simply said “He touched my neck.” The group was a little shaken, but continued their walk on this guided tour. Minutes later, another member stopped walking and said “There he is. Do you guys see him?” He pointed to one of the trees in the grass across from where the group was located. For those that saw the ghost, they saw a man hanging from a tree. They saw him struggling to get out of his noose, as if he was hanged on this tree. The group immediately went in for a closer look. When they closer, the image of the man faded, but there was a light mist over the tree and grass. This isn’t the only ghostly story that visitors have.

Stories say that Bonnet actually walks the streets of Charleston looking for his riches. Perhaps he is looking for Blackbeard’s treasure or he is looking for revenge. Of course, we will never be sure because no one has actually be able to make contact with the spirit. Those who have seen this ghost say that he does look lost or as if he is looking for something. Many people have seen more than one ghost of a pirate lingering through the streets of Charleston, especially near the Pirate House. There are even stories that say there are ghosts of prostitutes lurking in the darkness along this same street. Could these ghosts be those who used to entertain pirates? We may never know exactly what they want or what they are looking for.

What did happen here at the Pirate House? Are these pirates trying to get back to the booty? All we know is that once you see them, you will never be the same again! Visiting the Pirate House is an experience all its own and if you are in the area, it is a good stop to help get your feel for the paranormal. Perhaps they will give you a sense of piracy if you ever make contact with one yourself!