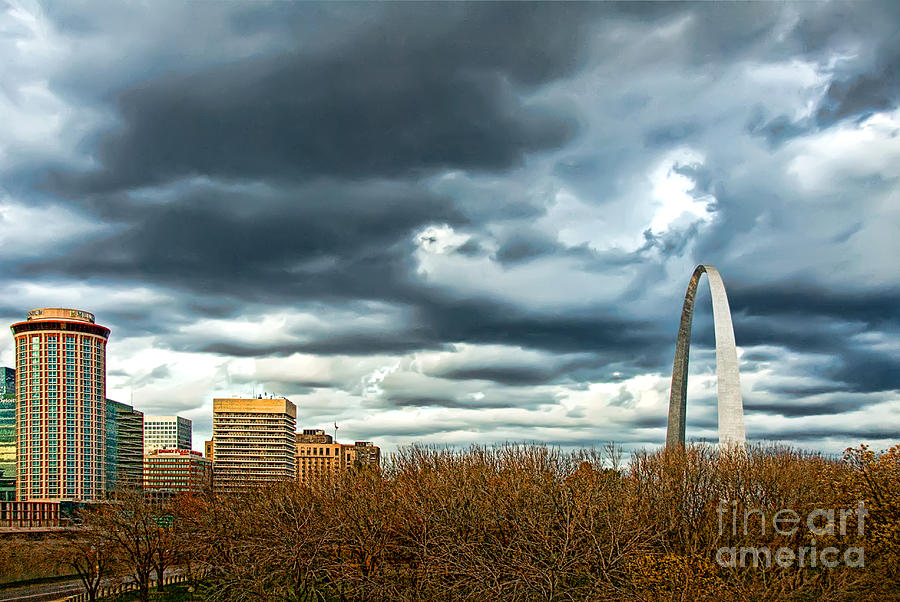 This is a unique view of my hometown. It is unique because it was captured out the side of our Mustang convertible traveling 60 MPH going down the hiway. (My husband was driving). Soon after this was shot the approaching storm hit the area.

The Gateway Arch in St. Louis, Missouri is located on the Jefferson National Memorial Expansion, and is a landmark in the state of Missouri. The history of the Arch dates all the way back to 1947, when locals were debating as to where to locate the structure. The original area was supposed to be located along the banks of the Mississippi River; however, over time it became apparent that the location was far too unstable for a historical monument.

The Arch was designed in 1947, by the Finnish-American architect Eero Saarinen and engineer Hannskarl Bandel, to commemorate the Westward expansion of the United States. The Arch honors three events in American history; the Louisiana Purchase, the establishment of the Cathedral Basilica of St. Louis and the Dred Scott case. The Dred Scott decision was one event that people felt culminated in the result of the Civil War, which was why the Arch posed such a heated debate.

Construction of the Gateway Arch began on February 12th, 1963 and was completed on October 28th, 1965. Once completed, the Arch stands at 630 feet tall and 630 feet wide at the base, which makes it the tallest land monument in the United States. On July 14th, 1967, the doors to the Gateway Arch were opened to the public for the first time.

The Arch is quite intimidating in structure with the base of the legs being equilateral triangles measuring at 56 feet per side and 17 feet at the top. Each wall is made of reinforced stainless steel covering reinforced concrete from the ground to 300 feet in the air, at which point the remaining 300 feet are constructed of rebar and carbon steel at the peak. The Gateway Arch is the tallest structure in St. Louis and the second tallest in the state of Missouri.

Once guests have viewed the visitor and welcome center, they can enter the elevator system which takes them to the peak, to the observation deck. At the top of the Arch, guests exit the elevators and climb a slight grade to the observation deck, from here through small windows, they can view the Mississippi River and all the way to Cahokia Mounds, in Southern Illinois. On a clear day, views from the top of the Arch can extend up to thirty miles. The elevators are egg shaped and the ride to the top takes approximately four minutes, while the trip down takes three minutes.

Rides to the top of the Arch are offered daily and tickets can be purchased in advance or at the visitor center. In addition to riding to the top of the Arch, visitors can also enjoy the IMAX Theater, which shows a movie about the Lewis and Clark expedition and other events involving the Westward Expansion. Over the years, the Gateway Arch has stood as a landmark in the Midwest, welcoming visitors from all over the world to partake of its unique architecture and interesting history.

Hard to upstage your Arch but this sky qualifies! Fantastic and terrifying.

Beautiful shot! Plus, I faved and voted!

Nice angle for your capture. The sky is beautiful! V65

Absolutely stunning and great clarity considering how it was taken

This is a fantastic city-scape capture; love the dramatic sky and the gateway arch is awesome. V38 and faved.

Love the contrast of the trees with the dark clouds! v

Great capture at 60mph. Nice comp, great Pov, for capturing the Arch, Makes for it to be unique!

Spent a lot of time here!!

You did very well to get this! Lovely threatening sky!

This is wonderful. Love the composition and contrast between the sky and the buildings and shrubs! v